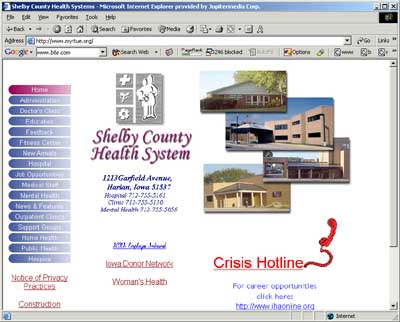 Maintaining the IT systems of a facility with just over 300 employees isn’t easy, according to Khristine Jacobsen, the facility’s IT manager. “It’s a huge job, and our tiny IT staff consists of 1.6 people,” she said.

“We were having a lot of trouble with malware and spyware,” said Jacobsen. “For every workstation affected, we had to physically take each machine offline, wipe out the hard drive and reload the OS and all the other software again. That created downtime for the staff and took a lot of technician time.”

Let the Upgrade Begin
Heartland Technology Solutions, a local Microsoft Partner and the reseller from which Jacobsen buys hardware and software, approached her to see whether SCHS wanted to take part in a study Microsoft was conducting on deploying Windows XP Service Pack 2 (SP2).

The initial upgrade consisted of five Windows XP computers, and according to Jacobsen, it took Heartland between one and two hours to install the software on the PCs. Jacobsen monitored the results and reported any problems or improvements.

“We had one problem,” says Jacobsen. “The installation affected one module in the Healthcare Management System (HMS), our main software application. The abstract module that handles coding patient treatments for proper billing wouldn’t work properly. We notified Heartland, and Microsoft tweaked the SP2 firewall and it worked. The same-day repair took a matter of hours.”

One of the initial five PCs resides in the hospital’s laboratory and sends real-time laboratory test results to the HMS system. “This system can’t go down,” said Jacobsen. “It’s an absolutely mission-critical computer. It didn’t go down, and we haven’t had a single problem with it.”

The Upside
Pleased with the original deployment results, Jacobsen has upgraded the rest of the facility’s 50 to sixty XP computers. “It’s been very easy to do,” she says. “We used the network to upgrade the rest of the PCs automatically.”

Jacobsen points to both limited funding and proprietary software written by local and state agencies for Windows 98 as the main reasons most of her workstations are not running XP. Even so, the time she saves on rebuilding infected machines makes a big difference in her schedule.

“ROI is a bit hard to quantify,” she said, “but I definitely get fewer calls from staff on XP computers than I get from people using the Win 98 systems.” Even though SCHS has a hardware firewall built into its network, Jacobsen said the SP2 software firewall makes the PCs more secure and blocks the spyware and pop-up ads.

“That’s important to us because the deadline to be HIPAA compliant is April 2005, and this upgrade is one more step toward achieving that goal. Overall, upgrading to SP2 has been a very positive experience that’s made my job easier.”

A Reliable Partner
Jacobsen said that having a solid IT partner &#151 like she has in Heartland Technology Solutions &#151 makes a big difference for busy, understaffed SMBs. “It’s important for people in small business to have an IT support network, as in a local vendor. Heartland is the go between that can get the answers I need when I’m buried in work.”

Jacobsen offers a few pointers for anyone looking for a reliable reseller. “You want someone who has a good reputation with other business people in the area,” she said. “Make sure the company or person comes highly recommended. Talk to the key businesses in your community &#151 the schools, banks and hospitals. They’ll know who to recommend.”