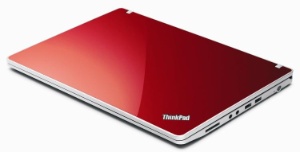 Since the brand’s inception, you could get a ThinkPad laptop in any color you wanted so long as it was black. But with the all-new ThinkPad Edge series, Lenovo breaks with that tradition — and several others as well — to deliver a ThinkPad tailored to entrepreneurs. In addition to a glossy red finish, the ThinkPad Edge features a redesigned keyboard and a more streamlined design.

“The ThinkPad Edge series meets the needs of the small business customer with a new sophisticated industrial design and contemporary keyboard design as well as the ThinkPad durability and reliability,” said O’Sullivan. “And perhaps most importantly, the ThinkPad Edge Series does all of this for a starting price of $549.”

The most striking departure from past ThinkPad laptops is on the outside. ThinkPad Edge models are available in red or glossy black (matte black is still an option) with silver metal trim around the edges. Open the lid and you’ll find a more contemporary-looking keyboard with improved ease of use.


For example, you no longer need to use a Function-key combination to enact multimedia controls, and select models of the ThinkPad Edge 14 and 15 will include illuminated keyboards for visibility in low light conditions. O’Sullivan reports that ThinkPad Edge keyboards are still spill-resistant, meaning they can handle a spill of a few ounces of liquid without damage to the machine’s underlying components.

Another durability feature is the active protection system for the hard drive, which employs accelerometers to sense jolts and drops and parks the hard drive heads should one occur. This keeps the heads from impacting the platters and potentially causing data loss. ThinkPad Edge models also feature the company’s built-in ThinkVantage tools that deliver security, rescue and recovery functions.

In addition to the new keyboard, Lenovo has redesigned the touchpad for the ThinkPad Edge family. The models include a larger, gesture-enabled pad that supports two-finger gestures for actions such as scrolling, zooming and rotating images. The machines are also ready for videoconferencing and VoIP communication thanks to built-in low-light Webcams, handy microphone- and camera-mute keys and preloaded Skype application.

For the environmentally conscious, Lenovo notes that the ThinkPad Edge family carries a Gold rating from the Electronic Product Environmental Assessment Tool (EPEAT) and meet Energy Star 5.0 requirements. The machines’ packaging contains no foam and uses many materials that are derived from 100-percent recycled content.

Jamie Bsales is an award-winning technology writer and editor with more than 15 years of experience covering the latest hardware, software and Internet products and services.

Jamie Bsales
Previous articleNeed a Small Office Server? Lenovo Has the Right IdeaCentre
Next articleIs Microsoft’s Office 2010 ‘a Couple of Months’ Away?