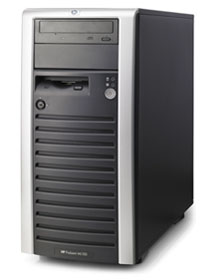 Small and mid-sized businesses are a big deal to Hewlett-Packard, especially when it comes to servers. Vince Gayman, director of SMB programs at HP, said that about 50 percent of all HP servers sales come from SMBs. With its enterprise hardware sales sagging, HP has seen demand for its ProLiant line increase.

HP also seems to recognize that when it comes to pleasing SMBs, loading up a server with every feature imaginable isn’t as important as offering the right features for the right price. And that’s good news for SMBs.

Baking a Server from Scratch
“We’ve designed products for the SMB market from the ground up,” Gayman said. Today’s announcement also includes renaming the
Storage NAS product line to be part of the Proliant family. “We want to take advantage of ProLiant branding,” he said, adding the SMB customers have tended to associate the NAS products with the Proliant line. The move also acknowledges that SMBs are less likely to mix and match Company A’s servers with Company B’s storage products. (More on HP’s new SMB storage offerings below.)

So how does a hardware vendor up the features ante while keeping the price down? The answer: Add more of what SMBs want and drop the stuff they don’t need. In order to control costs, HP has opted to keep some server features out of the ML150. “SMBs are not using the features larger enterprises may demand,” Jeff Carlat, group product marketing manager at HP, said. “Smaller businesses are more cost-constrained. Don’t need hot pluggable PCI slots, clustering, rapid deployment … They’re not fully utilized. The ML150 balances features and costs.”

While HP may have left off some features that are checklist items for large corporate server room purchases, the ML150 is designed to flex its muscle where it counts most for SMBs. It features two Nacona Xeon processors (the 32/64-bit processor released this summer is Intel’s answer to AMD’s Opteron CPU) that reside in a 5U tower case. The ML150 G2 can be configured with the Xeon 2.8 GHz, 3.0 GHz or 3.2 GHz with 1 MB L2 cache, according to HP.

It also offers ECC (Error-Correcting Code) memory, six I/O adapter cards, six hard disk drives and four memory slots. Carlat said that small businesses have told HP that servers “have to be something we can grow with.”

The HP ML150 takes on a new look. “It’s unique cosmetically. It’s a darker color with a silver metallic frame. It’s aesthetically appealing,” said Carlat. Not important, you say? While for some businesses looks may not matter, many SMBs such as law firms, real estate agencies, medical offices, do care about how systems fit in with the office decor.

Ready to Roll with SBS
Since servers don’t ship with operating systems, many SMBs are left to deploy the operating system themselves or incur the added expense of having a local computer specialist install it. Carlat said to make the ML150 more of a plug-and-play system, HP will offer the server with Microsoft Small Business Server preloaded for an additional $499.

The ML150 with Microsoft Small Business Server imaged prior to shipment is likely to be a popular option, based on research released by The Yankee Group last May. The Boston-based research firm reported that 86 percent of SMBs either already use or plan to purchase Microsoft Small Business Server 2000 or 2003. In contrast, only 11 percent indicated they use or plan to use Linux.

Another option that promises to be popular with some SMBs is the HP ProLiant Lights-Out 100 Remote Management Card. The $119 PC card plugs into the server and allows customers to diagnose and even resolve system issues from central, remote location.

HP’s Carlat said this feature can useful in a couple ways. For SMBs with branch or remote offices, one IT person can keep tabs on the servers in those locations. “It could be a law office with branches and a server in each one,” he said. The other way the Lights-Out 100 Remote Management Card might prove useful is with local computer specialists. “Many small businesses rely on trusted advisors. A reseller could have a number of businesses that it manages remotely.”

What in Store for SMBs
HP also unveiled a new family of NAS offerings under the HP ProLiant Storage
Servers brand.

To support the new HP ProLiant ML350, ML370 and DL380 Storage Servers, HP
also announced enhancements to its HP ProLiant iSCSI Feature Pack products
so customers can protect their Ethernet investments and avoid upgrading to
Fibre Channel as they move from direct-attached storage to networked
storage.

The new products are the result of a “well-defined desire we’re hearing from
SMBs to make the transition to network storage,” said Ian Duncan, HP’s
worldwide marketing manager for NAS.

Kyle Fitze, director of marketing for HP’s SAN division, said HP and its
partners have managed to “simplify and automate everything down to a few
mouse clicks … so a customer can get it up and running in less than an
hour.”

For $9,999, customers get the HP StorageWorks MSA1000, a 2Gb Fibre Channel
disk array with two QLogic’s SANblade HBAs and an 8-port Fibre Channel
QLogic SANbox Switch, all in a single box, for 24 percent less than the cost of
buying the components separately. The system doesn’t come with disk drives,
which Fitze estimates will cost $300-$1,000.

The system can scale up to 12TB, and HP also offers high availability
options. “It can really scale,” Fitze said.

Paul Shread, managing editor of EnterpriseStorageForum.com, contributed to this story.

Do you have a comment or question about this
article or other small business topics in general?
Speak out in the SmallBusinessComputing.com Forums.
Join the discussion today!
Facebook
Twitter
Linkedin
Email
Print