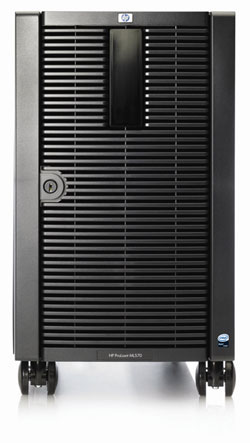 No, dual-core-based servers aren’t for every small- and mid-sized business. But some smaller companies rely on complex software to run their businesses, and those companies are recognizing the benefits of running demanding applications such as databases, supply chain management, customer relationship management and enterprise resource planning on servers equipped with processors designed to boost performance (as well as ease consolidation if your servers are starting to pile up).


The four-processor HP ProLiant ML570 and DL580 servers are designed to offer improved performance and virtualization, according to John Gromala, director server product marketing at HP.

“This is a significant processor and a significant upgrade,” Gromala said. He added that the new servers offer up to a 62 percent improvement over the previous generation of Xeon-based servers for applications such as databases, ERP, CRM, messaging and virtualization.

The Tulsa-based DL580 G4 supported 812 more SAP SD Benchmark users than it did in a previous two-tier SAP SD Standard Application Benchmark with older Xeon chips. CPU utilization was balanced across the four processors at 98 percent on the central server, according to HP.


Thanks to the new 7100 Xeon processors, DL580 G4 and ML570 G4 now support a 800MHz frontside bus (FSB), which connects the processor to memory, and up to 16MB of L3 cache, which provides performance gains for multi-threaded applications such as database, financial services and supply chain management software, according to HP. The DL580 G4 also support for up to 64GB of front accessible hot-plug memory, which is designed to help with demanding applications and virtualization software.


The ML570 G4 now offers support for 24 DIMM sockets as well as what HP describes as the largest number of drives and PCI slots of any ProLiant server.


For server management, Gromala said that HP also provides “a single pane of glass” to offer a single console to view and manage both virtual and physical data center resources through its HP Systems Insight Manager. “Lots of people are using these servers for virtualization,” Gromala said. HP integrates virtualization software from VMware and Microsoft as well as Linux virtualization technology, he added.


In addition to bridging the gap between its Xeon 5100 (aka, Woodcrest)-based servers and Itanium 2 (aka, Montecito)-based servers, the 7100 servers also complement its Opteron-based ProLiant servers. “People are happy to have choices,” said Gromala, adding that customers often express a preference in processor based on certain applications or software configurations. For that reason, he said, HP has a common set of management tools for Intel and AMD based servers.


In addition to HP, IBM and Dell are expected to have servers available based on the new 7100 dual-core processors.