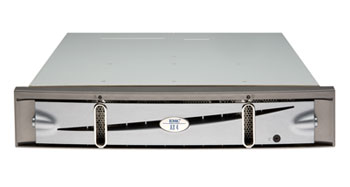 When it comes to storage and servers, Bob Dylan’s “The Times They Are A-Changin'” might be an apt anthem. After all, storage demands and the need to effectively manage all that data are growing faster than you can say terabytes. And a server isn’t simply a physical box anymore, thanks to virtualization technology.


Noting storage networks and virtual servers need to work together, EMC Corp. today introduced a SAN designed for small and medium businesses looking for a scalable storage capacity along with integration with VMware virtualization technology — the theory being that even if you’re not packing terabytes and flirting with virtual machines today, you will be soon.


The Clariion AX4, which will also be sold by Dell as the Dell AX4-5, can scale to 60 TBs and supports either iSCSI or Fibre Channel SAN connectivity. For the majority of SMBs, it will be the iSCSI option that’s most attractive. According to EMC, the SAN system can store, manage and protect data from up to 64 high availability Windows, Linux, Unix, NetWare and VMware Infrastructure hosts simultaneously.

According to EMC, the AX4 will eventually replace the AX150 in the Clariion line. “This is third generation in this line, and we haven’t changed anything with the simplicity of the storage,” said Phil Treide, marketing manager for EMC Clariion. “We expect lots of first-time network storage users.”


You also have the choice of either iSCSI or Fibre Channel and you can mix and types of drives to create tiered storage — i.e. SAS for high performance or SATA for higher capacity and lower price.

With a list price of $8,599 for its Entry Level Configuration, the Clariion AX4 system isn’t for every small business, but it is designed to give SMBs with hefty storage requirements plenty of room to grow. Treide said the AX4 features “lots of expandability. It’s all about scalability. Previously, it was 12 drives, but now it scales to 60 drives.” The Entry Level price includes 3TB of capacity, support for up to 10 hosts and Navisphere Express Management Software.


The management software is wizard-based and lets you “provision storage with six or seven clicks,” Treide said. You expand disk pools in the background, he said. The software is designed to expand capacity quickly with Clariion MetaLUNs and migrate data with the SAN via EMC’s Virtual LUNs. It also includes integrated snapshots for backup capabilities. “Snapshots are standard and that’s not typical in this price class.” The AX4 also supports path management and failover capabilities.


The Advanced Configuration scales to 60 TB and supports up to 64 hosts, which Treide said is important as “we move to virtual hosts.”


The Clariion AX4 was specifically designed for SMBs, according to EMC, and is built on the same architecture used in larger Clariion CX3 midrange storage arrays, which offer “Five 9s” availability or 99.999 percent of uptime. Treide said the “Web-based management tools are designed for storage generalists, rather than storage specialists.”


Let’s Get Virtual
The Clariion AX4 system was specifically designed to integrate with VMware Infrastructure capabilities, many of which require shared storage. Built-in features are aimed at making it easier to allocate high-performance storage for new virtual machines.


The Clariion AX4 also includes EMC’s Virtual LUN technology, which can be used in conjunction with VMware Storage VMotion, a new product introduced as part of the most recent version of VMware Infrastructure, for the non-disruptive migration of multiple virtual machine disk files. In addition, the Clariion AX4 supports EMC’s leading replication software, including EMC MirrorView, EMC SAN Copy, EMC RepliStor and EMC Replication Manager to provide the highest levels of uptime in VMware environments.


VWware may be not standard fare yet in small businesses, but “it is relevant for certain kinds of data-intensive small businesses” Charles King, principal analyst at Pund-IT, said. “We’re not seeing of VMware in production environments for businesses with fewer than 20-30 servers.


But for SMBs that moving to virtual servers, the AX4’s capabilities will be welcomed, King said. “Effectively backing up virtual servers is a technically intensive process. There aren’t a lot of storage arrays supporting it. It’s not something I’ve seen from anyone else.”


It’s makes sense for EMC to leverage VMware technology, King said “VMware allows them to be a systems vendor without selling servers. EMC definitely has ambitions well beyond the enterprise data center.”


However, King pointed out that both VMware and EMC will continue to work with vendors. “VMware is agnostic and that’s one of the keys to virtualization. VMware has certainly been open to working with anyone who has a good idea.”


EMC also isn’t going to put all its eggs in one virtual basket. “Microsoft is a major partner of EMC and you can expect them to continue to work together enthusiastically,” said King. EMC’s Treide confirmed that in the future, the AX4 will also integrate with XenSource virtualization technology and Microsoft’s HyperV when it ships sometime in 2008.


For Whom the Dell Tolls
Since 2001, Dell has partnered with EMC for storage networking. The companies renewed their vows in 2006, extending the partnership to 2011. However, the relationship could change now based on Dell’s November 2007 $1.4 billion purchase of iSCSI vendor EqualLogic.


For now though, Dell and EMC seem as friendly as ever. “We’ve had tremendous success with Dell, EMC’s Treide said, “and we plan to continue.”


Dell seems to agree: “This is the latest step in the strong partnership between Dell and EMC,” said Darren Thomas, vice president and general manager, Dell storage in a statement released this morning. “We’ve worked closely with EMC to define, design and deliver this system tailored to SMBs.”


PUND-It’s King said the Dell-EMC-EqualLogic triangle does produce some “interesting questions. It’s hard to say. The functionality and scalability of AX4 is available in some EqualLogic products. At the lower end there is some overlap.”


Dell’s Eric Cannell, product line manager for the Dell-EMC line, said EqualLogic is aimed at midrange users, the new AX4 at small businesses, and the MD3000i at the “smaller SMBs.”


King added that the Dell-EMC relationship has been good for both companies. “Dell’s storage business has never been as sophisticated as its servers. And the partnership helped EMC get into small businesses.”


The Dell relationship might be particularly helpful given the virtualization focus of the AX4. “Dell has said in the past that it’s the largest seller of VMware,” King said.