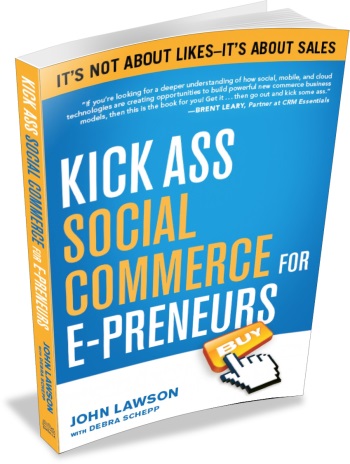 It’s become something of an accepted mantra, this idea that everything “social” has a soft (or nonexistent) return on investment (ROI). But in his book, Kick Ass Social Commerce for E-preneurs: It’s Not About Likes—It’s About Sales, John Lawson, CEO of Atlanta-based ColderICE Media dispels that notion and instead replaces it with the hard truth. “Everything has to, at some point, attach itself to that bottom line,” says Lawson. That means it’s time for small business owners to turn those likes and retweets into revenue.

Create a Call to Action

Social media is one avenue that consumers use to tell you they like you, but Lawson says that doesn’t mean they’ll actually buy something from you. Yes, you want your audience to like you, but “it’s about how to take that emotion and turn it into an action,” he explains. And without a clear call to action, the true effectiveness of engaging through social media is understandably difficult to measure. That brings us back to the assumption that social platform ROI is low.

“Part of why people think it’s soft is because they’ve never attempted to measure it,” Lawson says. “Once you can measure something, you can tweak it and make it better.” That process, he says, will propel a business from receiving likes to receiving actual sales.

As social media evolves, Lawson says the knowledge base surrounding it—how to leverage social channels, where businesses can most effectively use a call to action—is maturing. “We didn’t have enough actual facts, and people were just spouting an awful lot of rhetoric or simply what they thought would work,” he says of the early days. But business owners want to cut to the chase. “We want to know what’s working, we want to put it in place, and we want to execute,” he says.

Social Media Is Not Social Commerce

Understanding the difference (and there is a difference) between the various functions that occur in a social marketplace is the first crucial step. Lawson breaks it down into four categories:

People often use the terms interchangeably, but he says that’s a mistake. “The platform is just a platform,” he says of the social aspect of each function. “It’s clay. We can do whatever we want with it.” It’s a key piece of the puzzle in separating out likes (social media) with sales (social commerce).

As the social landscape matures, SMBs are learning that the wide net they’ve been casting may not be the best approach. In his book, Lawson describes a more effective alternative: defining the king consumer—the target client a particular business aims to reach.

“You’re trying to get in and really carve out a slice of the pie,” Lawson says. In the SMB marketplace it’s often about the boutique experience, but now it’s on a grander scale than the corner stores of days gone by. “People want to feel special. Those are the people we’re trying to get,” Lawson says of his suggestion that small businesses pare down their audience as a way to increase the impact of social commerce.

Along with winnowing down the audience, Lawson says there are a couple of social channels that SMBs may want to focus on for best results. The first is a small business blog, which Lawson describes in his book as a “dandelion at the center of your social commerce plan.” The seeds from that dandelion can go far. From the blog you can push things out to other channels, YouTube being Lawson’s personal favorite because it mixes video and audio. It’s also a wonderful launch pad of its own.

“I can take a video and transcribe it and turn it into a blog post,” he explains. No matter how you repurpose the content, it always makes great fodder for Facebook posts and tweets, all of which are part of the master plan to convert consumer engagement into consumer action.

One misstep Lawson says he commonly sees small business owners make is spreading themselves too thin across too many platforms, most of which are probably underperforming from a sales standpoint. “They get on a platform, and they find out how to do an ad or create a post,” he explains. But then they jump to a second platform before they’ve mastered the first. “They don’t find out what works,” Lawson says.

Rather than focusing on increasing sales conversions on one platform, SMBs instead repeat what may be an ineffective strategy on subsequent channels. Lawson offers a better approach: drill down on the first channel to improve results. “Because we know if we can get it right here, then we’ve got something that might work over there,” Lawson says. In the end, if a social media campaign isn’t producing measurable sales results, then it isn’t working, no matter how many likes it nets you.