Protect Your Android Device with These Antivirus Apps 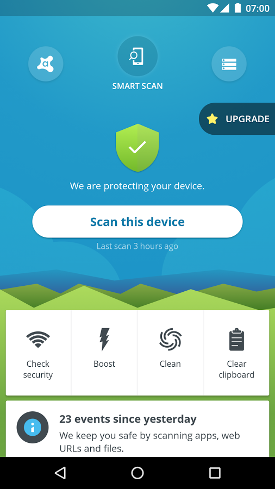 Small business owners and employees rely heavily on mobile devices to keep them productive no matter where their jobs take them. As the volume of valuable data residing on smartphones and tablets grows, the risks also increase. Malware and viruses have the potential to corrupt this information or to make it accessible to thieves and hackers.

Like the antivirus software that has long been used on desktop computers, similar applications are now also available to help protect mobile devices. If your team uses phones or tablets to move your business forward, be sure these devices are secured with antivirus software. Some security applications are free, some have paid versions and many offer a trial period with expanded functionality. Be sure to confirm you’re getting the version that includes the features you need.

The Avast platform scans for malware, spyware and viruses across files on the device, as well as applications and even websites. If you already have apps installed on your tablet or smartphone, let Avast review them and show you the permissions and access rights for each one.

Web protection built into Avast means that potentially harmful links are blocked and sites infected with spyware or trojans are kept at arm’s length. If you enter a URL incorrectly, Avast will even help you fix it so you don’t end up at a potentially nefarious site by accident.

Additional features include a call blocker that allows users to maintain a blacklist so unwanted callers can’t get through, and another handy option verifies the security of Wi-Fi networks so you know the connections can be trusted.

AVG AntiVirus supports real-time scanning of applications and files, along with games and even settings, so you know your device’s built-in security remains at full alert. Additional proactive security measures come in the form of locking applications individually to prevent access and a handy vault feature that provides a safe place to store pictures. 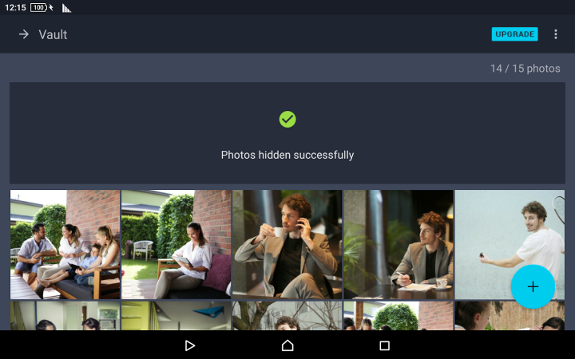 Users can surf the web knowing AVG AntiVirus is ready to identify threats and block suspicious pages. In addition to keeping your device safe from malware and viruses, the app has the horsepower to protect against text messages that could corrupt or compromise your phone or tablet.

AVG AntiVirus also has remote management features that include triggering the phone’s ringer so you can find the device if it’s nearby, pinpointing a wayward phone on Google maps, locking the phone to prevent unauthorized access and wiping the device and any content on the installed SD card.

Comodo features real-time, always-on protection, with users also having the option to schedule scans or conduct on-demand scans to ensure security risks don’t slip under the radar. As a way to spot threats before they can take hold, Comodo monitors the installation of new applications. Through its secure browsing feature, the software also gives proactive warnings if a user attempts to access a URL that’s potentially compromised or dangerous. 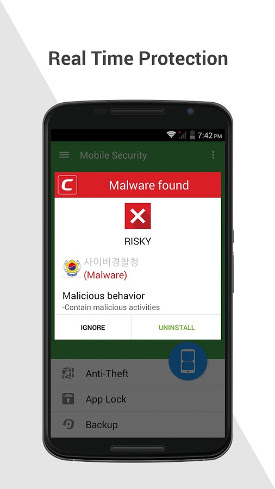 Administrators can control access to apps, pictures and messages with the platform’s App Lock feature. Plus, lost or stolen devices can be remotely tracked, locked and even wiped clean to ensure sensitive data doesn’t fall into the wrong hands.

Users who connect to public Wi-Fi hotspots will appreciate Comodo’s robust protection, which includes encryption and a security verification process that runs before a connection is made.

Norton Security and Antivirus enables users not only to scan their device for viruses, spyware and malware, it also includes a feature that removes dangerous applications that may already be installed. Web shoppers should take note of Norton’s Safe Search function, which displays safety information for websites so you can enter payment and other sensitive data with confidence. 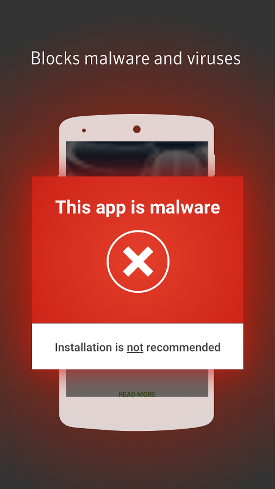 Devices that have grown legs — whether through misplacement or theft — can be remotely locked to prevent unauthorized access. Users can also activate a feature that locks the device if the incorrect password is entered ten times, ensuring that a stranger doesn’t gain access to the private information. If the SIM card is removed, Norton’s application offers additional protection by immediately locking the phone to block further use. The remote locate feature pinpoints devices on a map, and if the phone or tablet is nearby, a scream alert can make it easier to find.

Trend Micro Mobile Security & Antivirus doesn’t just protect against viruses and malware, it’s also designed to thwart ransomware attacks and to shut down malicious apps that could expose banking or other sensitive data. Another useful feature is the ability to protect against corrupt links in messaging applications, a problem that represents a growing concern among mobile device users. 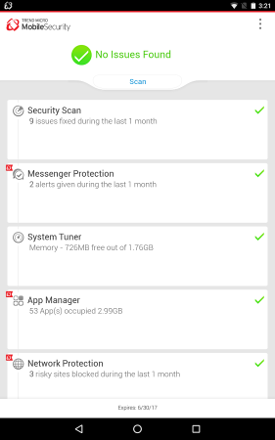 In addition to an antivirus scanner for the device, Trend Micro’s application also acts as a privacy scanner for Facebook, letting users know if their settings may be permitting public access to data they want to keep private. The device and the information stored on it can be further protected against potential threats by leveraging Trend Micro’s control features, which limit web access and block any on-device applications you don’t want others to use. The platform even offers call and text filtering, putting a stop to unauthorized contacts.

Julie Knudson is a freelance writer whose articles have appeared in technology magazines including BizTech, Processor, and For The Record. She has covered technology issues for publications in other industries, from food service to insurance, and she also writes a recurring column in Integrated Systems Contractor magazine.

Julie Knudson
Previous articleRansomware and the $99K SMB Shakedown
Next articleIs Your Coffee Maker or Thermostat a Security Threat?