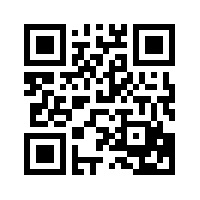 Not just any cookies, mind you, but sweets with a Quick Response (QR) code printed on them. For example, this unusual marketing tactic helped drive traffic to Incisive Media’s website during the fall 2011 SES Chicago conference, according to an Incisive Media executive.

Here’s the back story on QR codes, along with examples of how companies are using them and tips to help small businesses make the most out of QR code marketing.

The QR Code Back Story

QR codes have been around since 1994; Toyota invented them to track vehicles during manufacturing. But in the past few years, businesses large and small have started using QR codes to direct consumers to a specific URL, such as a Web page offering discount coupons, a YouTube video, or more information about a product on display.

Figure 1: Scanning this QR code will take you to the mobile version of author Jim Martin’s website.

The matrix QR barcode consists of square dots in a square pattern against a white background. When you scan a code with a smartphone QR reader app, you’re automatically taken to a designated URL on your device. There are countless websites offering free or paid QR code generator tools, such as QReate & Track, Delivr, and QRStuff.com. It’s extremely easy to generate a QR code using these and other websites.

Aside from baked cookies, QR codes are showing up all over the place: in movie posters, on business cards, in magazine articles and ads, in store windows — even in Times Square billboards.

Consumers are increasingly paying attention to the codes. A June 2011 comScore study found that 14 million mobile U.S. users scanned a QR code. For the three-month period ending in October 2011, a monthly average of 20.1 million U.S. mobile phone owners scanned a QR code using their device, according to comScore.

Small businesses everywhere are experimenting with QR code marketing, many with encouraging results.

The owner of North Coast Wine & Beer in Ohio placed large QR codes on the front of two of his three retail stores, according to Cleveland.com. Manny Rai, the owner, says eight to 10 people scan the code every day. The codes, which can be scanned from up to 40 feet away, are helping his business attract attention, Rai says.

A Burlington, N.J. gardening business, Mike the Gardener Enterprises, printed a QR code on a bumper sticker that directs consumers to the business’s “Seeds of the Month” YouTube video, owner Mike Podlesny told Entrepreneur.com. Podlesny offered the free sticker to fans of his Facebook page, resulting in more than 1,200 views of the video.

Rico Elmore, the owner of Fatheadz Eyewear, has added QR codes to his company’s racecar driver sponsorship program. The racecar drivers that Fatheadz sponsors autograph and give out “hero” cards to their fans at events. The cards contain a QR code. When the fan scans the code, Fatheadz’s website pops up, Elmore told Psychology Today.

Large corporations are using QR codes for marketing purposes, too. For example, Starbucks uses QR codes in stores to promote its mobile payment app and to provide more information about its coffee products. Some Starbucks QR codes have also let consumers listen to music from a region in which a particular coffee was grown.

Verizon recently increased sales by 200 percent through a competition in which its retail store customers scanned a QR code to share their competition entries on Facebook, according to Mashable. When a friend used the link to purchase a Verizon device, the customer who scanned the QR code would win a smartphone. Verizon experienced a $35,000 return on a $1,000 investment.

What is Digital Marketing?