5 Ways to Use an iPad for Small Business 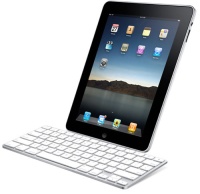 Early in the iPad era — a few weeks ago — a debate raged in the tech blogosphere about whether Apple’s new tablet computer could be used as a mobile tool for business. That debate has pretty much died down, and the reason is simple.

Whatever the iPad’s technical merits or shortcomings – and it has both – and not withstanding that Apple designed it primarily as a consumer product, it’s clear people will use it for business. Even if it’s only employees using their personal iPads for work-related activities.

But is there a case for small businesses actually buying iPads for their employees? We think there is. So does Mark Tauschek, director of IT research at Info-Tech Research Group, a research and consulting firm that serves small-medium enterprises.

“Some people don’t see it,” Tauschek said of the clients he’s talked to about the iPad. “But we do — in certain circumstances. And we’ve had a fair amount of interest on this from other clients.”

Info-Tech helped us identify five compelling ways that small business can use the iPad (see below), but Tauschek pointed out that it also has considerable appeal as a general-purpose business tool — for e-mail and work-related Web browsing at the very least.

The iPad: A Jack of Some Trades

The iPad isn’t appropriate technology for every business…small or otherwise. Nor is it suitable for every employee. Still, Tauschek argued that in certain cases, the mobile device makes a compelling proposition.

“It’s a pound-and-a-half device that gives you ten hours of battery life,” he said. “It’s very fast, it has very good multitouch. And a lot of business apps are already available for it.”

Citrix Receiver for the iPad from Citrix Systems also lets companies use the device as a thin client to remotely access applications on Windows servers or desktops — on a local network or through a VPN connection, over Wi-Fi or 3G.

So what kinds of workers could benefit most from using an iPad?

Some service technicians already use mobile apps on smartphones to communicate with the office, to receive dispatches, report on work completed and sometimes to process payments. Mobile dispatch applications improve productivity and streamline data flows, eliminating rekeying and resulting errors. They can also speed payment of bills.

The iPad’s 10-inch screen makes it that much easier for big-fingered techs to navigate these applications, read the dispatch information and key in the minimal amounts of text they typically need to send.


As Tauschek noted, many technicians carry dog-eared, out-of-date repair manuals in their trucks to refer to when onsite. One of the iPad’s strengths is its e-reader capability. Storing repair manuals on the iPad, or making them available online, means they won’t get lost, mutilated or out of date, he said. Manuals could also now include animated or video demonstrations.

We haven’t seen an iPad app specifically for service techs yet, but we’d be surprised if one didn’t appear before long.

Potential Downside: Typing with an iPad is easier than with a smartphone, but it’s still not ideal. The iPad is not a phone, and it has no camera, so it’s not a fit for mobile techs that need a camera to send pictures of problems back to experts at the office.

One hospital in California has already announced plans to equip clinicians with iPads. It was attracted by the long battery life, portability and wireless connectivity — ideal for doctors on the move all day around a hospital or campus.

The hospital will use the iPads for e-mail and other standard computing tasks, but will also have access to server-based applications using Citrix Receiver to look at X-ray images, EKG results and other patient monitoring programs. Medical images will show well on the iPad’s ten-inch, high-resolution screen.

Small medical clinics could also benefit in some additional ways.

Many clinics have either switched, or are in the process of switching, to electronic records systems to replace cumbersome paper-based patient records. Doctors and nurses now use local networks to access patient records, medical images, pharmacological and other reference information.

Desktop computers also place a barrier between doctor and patient. Often the doctor is looking at the screen and typing rather than engaging with the patient. An iPad would eliminate some of that distance.