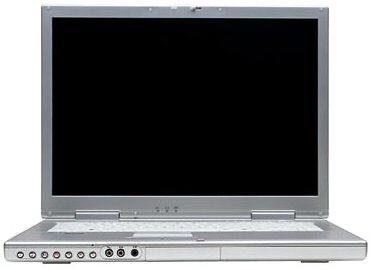 You normally think of affordable portable vendor WinBook as competing with Gateway and Dell, but somebody at the Ohio company seems fixated on Apple’s wide-screen PowerBook G4. The new WinBook W160 has the same display size (15.2 inches diagonally) and resolution (1,280 by 854) as the middle version of the laptop Mac, with the same silvery finish.

It doesn’t have the PowerBook’s backlit keyboard, but its white, semi-translucent keys are the sincerest form of flattery. At six pounds, it’s only six ounces heavier. Of course, being a WinBook, it’s about $500 cheaper than its Mac counterpart.

We’ll drop the comparison before being burned by flame-mailing Apple fans (yes, we know, the PowerBook comes with more software and faster versions of FireWire and wired and wireless Ethernet). But we needed an angle to explain why shoppers should consider a $1,999 notebook from a firm often associated with $999 notebooks.

The WinBook isn’t priced far below other Intel Centrino systems in its class, but its 15:10-aspect-ratio display outclasses the generic 14.1-inch XGA screen of Gateway’s 200XL, and it’s 1.3 pounds lighter than Dell’s wide-screen Inspiron 8600. It’s an elegant balance of performance, panorama, poundage, and price.

A Wireless Wide-Body
The Centrino sticker tells you the system is built around Intel’s efficient Pentium M processor with 400MHz front-side bus and 1MB of Level 2 cache, while the W160 model number tells you it’s the 1.6GHz version. Other familiar Centrino components include Intel’s 855GM chipset and Pro/Wireless 2100 network adapter — sticking with the trusty 802.11b instead of faster 802.11a/g WiFi flavors. But instead of settling for Intel’s integrated graphics, WinBook opted for Nvidia’s more 3D-game-worthy, or at least letterboxed-DVD-worthy, 64MB GeForce FX Go5200.

The 1,280 by 854-pixel panel is bright, crisp, and colorful; our test unit had no flawed pixels, and we admired its even, above-average backlight — we often judge all but the top one or two too dim, but could see comfortably with all but the bottom few of the WinBook’s eight screen-brightness settings.

And the GeForce FX Go5200 controller kept graphics moving smoothly. Aside from the usual, minimal, tinny speakers, the W160 was a fine DVD movie viewer, and it sprinted through the ancient Quake III Arena benchmark at 169 frames per second and an Unreal Tournament 2003 flyby at 79 fps (both at 1,024 by 768 resolution).

Its FutureMark 3DMark 2001 SE (freeware) score was a fair-to-middling 5,978, though it stumbled in the newest, most demanding 3D simulations — a 3DMark03 score of 887, AquaMark3 GFX rating of 687, and stuttering, frequent-freeze-frame 9 fps in Wolfenstein: Enemy Territory.

Like other Centrino slimlines, however, the WinBook is intended more for business travelers than avid gamers, and its performance is more than adequate for office applications. FutureMark’s PCMark 2002 scored it at 5,224 (CPU), 4,666 (memory), and 583 (hard disk), and it earned a rating of 159 — Internet content creation 184, office productivity 138 — in BAPCo‘s SysMark 2002. That’s right on par with other Pentium M/1.6 portables we’ve tested, and not bad even for an entry-level desktop.

At six pounds (the AC adapter adds just under a pound) and 10.2 by 13.6 by 1.2 inches, the W160 is a comfortable if not feather-light or forget-you’re-carrying-it lap or briefcase companion — though, like other wide-screen notebooks, it’s too long for some briefcases’ notebook compartments.

In addition to the backlit blue power button above the keyboard, there’s a tiny chrome power button on the front edge — along with tiny, invisibly marked volume, play/pause, and previous/next track buttons — for using the closed system as an audio CD player. Line-in, line-out, and microphone jacks are also up front; the Matsushita UJ-811 DVD-RW drive — which couples slow 1X DVD burning with 8X DVD playback and 16/10/24X CD-RW functionality — is at the left.

The right side offers an infrared port and single PC Card slot, while the rear edge reveals parallel, VGA, S-Video out, modem, Ethernet, IEEE 1394 FireWire, and three USB 2.0 ports. The cooling fan comes on occasionally — more, we suspect, when the graphics accelerator is working hard than the Pentium M processor is straining — but is reasonably quiet.

The ivory keyboard looks classy and has an exemplary layout with dedicated cursor-control keys, but has a thin and flimsy feel — when pressing the keys along the right edge, it felt as if the whole keyboard was flexing, if not liable to pop out. The touchpad and its two good-sized mouse buttons work smoothly, though scrolling is handled by the Synaptics driver instead of a hardware wheel. Nor are there any launch buttons for favorite applications, though pressing Fn-F1 toggles power to the WiFi adapter when you want to save some battery life.

Speaking of which, the W160 is no endurance-record-setter, but a quite respectable runner when away from AC power: The 9-cell lithium-ion battery gave us two hours and 40 minutes’ use in our toughest multimedia and disk-thrashing sessions, and three hours and five minutes in one stint that started with WinBook’s built-in system/software reformat/recovery and finished with some sedate word processing. A spare pack is $229.

Our test system came with Windows XP Professional and a 90-day trial of Norton AntiVirus 2004 preinstalled, plus CDs for InterVideo’s WinDVD 4 and B’s Recorder Gold 5. WinBook charges $269 and $349 for the Microsoft Office 2003 Small Business and Professional editions, respectively.

There seem to be three classes of notebook PCs nowadays — only-nominally-portable desktop replacements with hot-rod (and hot-running) CPUs and graphics; economy models with neither the latest technology nor lightest design, but big screens and bargain prices; and a range of systems, from subnotebooks to middleweights, for actual mobile workers and business travelers. The WinBook W160 fits in the center of the last pack — it’s a good all-around performer and a not-too-heavy way to get wide-screen window arranging or DVD viewing.