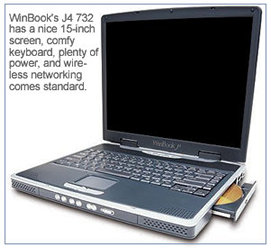 Cable TV’s Discovery Channel has an unexpected hit with the series “Monster Garage,” where hot rodders take sledgehammers and welding torches to turn a Mustang into a lawn mower or a school bus into a pontoon boat. Laptop PC vendors have been doing something similar ever since Intel introduced the Pentium 4 “Northwood” early last year, stuffing the desktop processor into notebooks that trade a bit of battery life for extreme performance. Last June, in fact, we the 2.2GHz WinBook J4 and found it a monument to tempting excess.


Well, someone at WinBook’s been watching the Discovery Channel: The company has not only remodeled the J4, giving it a handsome black case with chrome accents, but crammed in Intel’s ultimate (for now) CPU, the 3.06GHz Pentium 4 with 533MHz front-side bus. Could we resist a test drive? Can you resist spending $3,136 for ultimate-desktop-replacement bragging rights?

We should explain up front that, since last year’s review, the WinBook J4 line has actually split into two models — the economical J4 731, with more modest CPUs and an SiS integrated graphics chipset, and the high-performance J4 732, as seen here. We should also note that, while WinBook announced it last month, you’ll need to watch the company’s Web site to see when the 3.06GHz model 732 actually goes on sale (or if, as we hope, the price has fallen as WinBook’s 2.8GHz and slower models’ have).


At presstime, the machine was still getting a motherboard tweak to enable the Pentium 4/3.06 chip’s Hyper-Threading — the mock multiprocessing feature that’s been disabled by default on many first-generation 3.06GHz desktops, but that promises to play an increasingly important role as more applications and multitasking environments are optimized for it. Our SiS 645DX chipset-based loaner did not support Hyper-Threading, which is not to say it wasn’t the fastest laptop we’ve tested to date — comparable, more or less, to a well-equipped 2.8GHz Pentium 4 desktop.


You want numbers? Try a BAPco SysMark 2002 score of 228, with 334 in Internet Content Creation balanced by 155 in Office Productivity, or FutureMark PCMark 2002 scores of 7,316 (CPU), 6,120 (memory), and 549 (hard disk). The J4 loads documents and snaps through spreadsheets like nobody’s business — and keeps pace with the latest games, thanks to ATI’s 64MB Mobility Radeon 9000 graphics controller.


But What About Battery Power?

On the other hand, the mighty P4 processor requires a noisy, constantly noticeable cooling fan. And the above benchmarks all reflect running on AC power: When unplugged, the WinBook slows from 3.06GHz (with a 533MHz bus) to 2.14GHz (with a 373MHz bus) — still more than fast enough for any presentation or e-mail session, but merely above the laptop average. For example, its SysMark Internet Content Creation score falls from 334 to 149.


Nor, as you might expect, can you expect coast-to-coast computing on battery power, unless maybe you’re taking the Concorde. While the 87-watt-hour lithium-ion battery is one of the biggest in the notebook business, it still averaged a disappointingly brief 93 minutes of work time before low-battery alarms started their serenade. (The supplied InterVideo WinDVD 4 software, while it made movies look great, popped up a low-power warning and quit even earlier than that, when battery power fell to around 20 percent.)


We were dismayed, too, that the J4 repeatedly — and we mean repeatedly, a dozen times in a row — froze or hung up when we attempted its press-F10-at-startup, boot-into-hidden-partition procedure to restore the factory hard-disk image while on battery power.


We admit that every laptop owner’s manual warns you against trying anything as fateful as a system rebuild without securing a steady source of AC power, but we also admit that it’s become a regular part of our real-world, more-strenuous-than-just-word-processing battery trials. And other notebooks (including other WinBooks) have completed the procedure before running out of juice, without locking up after anything from one to nine minutes as the J4 did. On the other hand, the system didn’t freeze or fail when running other, everyday applications in battery mode.

Since last year, the J4 has shed its beige-whale color scheme for classy black, with a rubberized top that makes the laptop easier to lift with one hand — although it’s still no fun to carry that way, at 8.4 pounds (definitely over the 8-pound “Oof! This is heavy” notebook limit, though shy of the 9-pound “Argh! This is impossible” status of some desktop replacements).


The keyboard has the same full-sized, no-complaints layout and flat but comfortable typing feel, but has lost its IBM ThinkPad-style embedded pointing stick — which we found too low and uncomfortable to be a worthy alternative to the provided touchpad (with nice-sized buttons and scrolling rocker switch) anyway. Handy buttons on the front edge let you listen to audio CDs even while the case is closed, though even the cheapest headphones sound better than the tinny onboard speakers. Buttons flanking the power switch above the keyboard launch Internet Explorer and Outlook Express, but can’t be reprogrammed for other purposes.


Connection possibilities remain plentiful, with Ethernet and IEEE 1394 ports and a PC Card slot at the left; four USB 2.0 (upgraded from last year’s version 1.1) ports at the right; and modem, microphone, and audio-out jacks plus parallel, VGA, S-Video, and infrared ports at the rear. (Don’t look for a floppy drive; an external USB floppy is a $99 option.)


WiFi 802.11b wireless networking is standard, as is Windows XP Professional, though no other software is bundled except for WinDVD 4 and Symantec’s Norton AntiVirus 2003.


That makes the J4 732 more of a bragging-rights than sensible-shoes purchase: a blazing 3.06GHz desktop replacement with the emphasis on desktop, a luggable you’d occasionally unplug to take home rather than rely on for frequent travel. We like it, but with today’s economy and today’s PC prices we’re painfully aware you can get both a fast desktop and a perfectly capable (and lighter) notebook for less.


Still, there’s always a market for the extreme. The Discovery Channel has announced plans for a sequel show, “Monster House,” that’ll make over people’s homes into wild theme-park attractions while they’re absent.


So is it fast? Oh, yes indeed — it’s fast. It also has a nice 15-inch screen, comfy keyboard, and wireless networking comes standard. But it’s also big, heavy, noisy and expensive for laptop that only gives you an hour and a half on battery power.