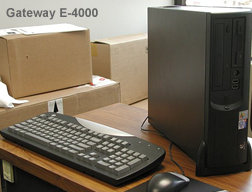 If you look at the pictures on Gateway’s Web site, the E-2000 and E-4000 “managed PCs” — that is; business desktops or network clients — appear in either conventional minitower or stylish microtower cases, with six or three drive bays respectively.

Check out the configuration menu, however, and you’ll find Gateway is offering a new variation on the small-form-factor fad: a four-bay case that’s about as petite as a PC can get while keeping everything an IT manager will find reassuringly familiar, from room for conventional floppy and optical drives — rather than costlier, notebook-style slimline drives — to expansion slots that stand proudly, traditionally upright — instead of being squeezed into some Communist horizontal riser-card arrangement.

And while it has half a dozen USB 2.0 ports, the E-4000 we tested isn’t one of those newfangled “legacy-free” systems — it provides good old parallel, serial, and PS/2 ports, so it’ll work with any peripherals the corporate IT department has stockpiled. Add a low price, solid feature set, and three years of service and support, and you’ve got a desktop that won’t make waves, but will save desk space while speeding through everyday applications.

Got Zip?
At 13.3 by 16.3 by 4.1 inches, the Gateway is a few inches bigger and not quite an inch taller than another full-sized-drives-in-downsized-case business desktop, the three-bay IBM NetVista S42 we reviewed last month. Both can be placed either beneath a monitor or — propped on edge with a supplied plastic stand — beside it.

Compared to the IBM, the E-4000 justifies its extra bulk with not only a fourth drive bay, slotted under the internal hard disk, but three vertical instead of two horizontal PCI slots plus an AGP 4X slot for graphics upgrades. (Only low-profile PCI and 1.5-volt AGP cards will fit, however.)

The AGP slot is one of the things that differentiate the E-4000 from its E-2000 managed-client sibling, along with the availability of faster Pentium 4 processors (up to 2.8GHz versus 2.0GHz) and larger, faster hard disks (up to 200GB). Both are available in Gateway’s three- and six-bay as well as the four-bay chassis; the three- and four-bay versions are the same price, while the minitower is a $40 upgrade (or an $80 upgrade with front audio ports and a 250-watt instead of our test unit’s 160-watt power supply).

We have to admit we’re underwhelmed by Gateway’s touting of the new chassis’ fourth storage bay. The Web site won’t let you configure it with a second hard drive, so its main benefit seems to be the option of adding a front-accessible Iomega Zip 750MB drive ($99) in addition to the 1.44MB floppy and optical (in our system, a CD-RW) drive. If you have a stash of Zip disks from previous PCs — Iomega’s new drive can read 100MB and 250MB as well as 750MB Zip disks, though it can write or format just the two larger sizes — it might be worth considering.

Our E-4000 was a close match for the specs of last month’s NetVista, and an almost perfect match for its price: Gateway’s site lists our test system for $1,069 with a 2.4GHz (533MHz-bus) Pentium 4, 256MB of memory, a 60GB hard disk, floppy and CD-RW drives, 10/100Mbps Ethernet, Windows XP Professional SP1, and no monitor. (For the record, the IBM was $6 less with the advantage of a Gigabit Ethernet adapter but the disadvantages of a smaller 40GB hard disk and DVD-ROM instead of CD-RW.) Gateway backs its business PCs with a three-year parts and labor warranty with next-business-day on-site service, a comforting plus over the shorter warranties creeping into the profit-squeezed consumer market.

While we have no complaints whatsoever about the Gateway’s Excel or PowerPoint prowess, it’s obviously not meant to be a game machine; the unit’s Intel 845G integrated graphics chipset is a bit older and slower than the 845GV in the NetVista, offering a sedentary 19 frames per second in the Quake III Arena benchmark in High Quality 1,024 by 768 mode and a 3DMark 2001 SE Pro score of 1,389.

But as mentioned, if you’re determined to play games on company time, you can install an AGP card in the Gateway as you can’t with most integrated-graphics clients; Gateway offers a 32MB Nvidia GeForce2 MX200 for $40 or 128MB GeForce4 MX440G for $80.

Two AGP 2.0 ports and a headphone jack are conveniently mounted up front. Around the back, you’ll find four more USB ports plus parallel, serial, and PS/2 mouse and keyboard ports, as well as the VGA monitor and Ethernet connectors and audio in, out, and microphone jacks.

The Little Desktop That Could
Removing one thumbscrew lets you pop the lid and admire the Intel D845GRG motherboard, with good access to the one AGP and three PCI slots and pretty good access (partly buried by cables) to the two DIMM sockets, one of which is occupied by the 256MB DDR266 module. The Lite-On 48/24/48X CD-RW drive is mounted atop the floppy drive (skipping the latter will save you $5 at order time); an Analog Devices SoundMax 1981A integrated controller is more than adequate for this office workhorse’s audio. The power supply’s cooling fan is audible but not obnoxious.

The keyboard is quiet and comfortable, though it reminds us of an economy car dashboard with blank circles where optional gauges aren’t included, because of the plain silver arc where Gateway’s consumer keyboards have multimedia-control and program-launch buttons. We suggest spending an extra $10 for the Logitech USB optical instead of the supplied PS/2 mechanical mouse.

The E-4000 doesn’t come with an office suite, but Gateway preinstalls Norton AntiVirus 2003, Intel’s LANDesk Client Manager, and Roxio Easy CD Creator Basic along with Windows XP Pro (and, oddly enough, the Rhapsody digital music service Gateway is plugging on its consumer PCs). Documentation consists of a skinny pamphlet and CD full of PDF files, the four-bay chassis too new to be included in either.

If the last decade’s craze for minitowers makes you nostalgic for old-fashioned, under-the-monitor desktops, the Gateway E-4000 deserves a look — it’s a bread-and-butter PC with reasonably spicy performance, in a package IT managers will feel comfortable with.

The Gateway E-4000 is currently available at regular retail and online outlets, priced at $1,069 as tested.

Eric Grevstad
Previous articleHow Much Computer Does $1,000 Get You?
Next articleWorking with Canon’s i550 Color Bubble Jet Printer