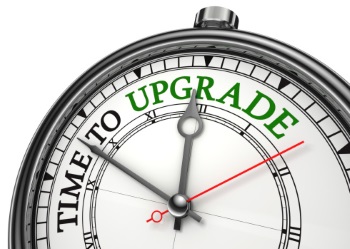 Nowadays, the solution to a slow-performing PC or server is simple: get a new one.

Easy online availability, rock-bottom prices and fast shipping make whipping out the company credit card a no-brainer. In a day or two, a fast new system takes its place, letting you get back to business—after recycling the old machine, of course.

Even if your small business can easily afford the few hundred dollars it takes to buy a decent notebook these days, Robert Wheadon, director of the Micron consumer products group and Solid-State Drives (SSDs) for Crucial, Micron’s flash storage subsidiary, argues that small business owners should take a good hard look at maximizing their current IT investments before replacing them. Familiar to computer repair and upgrade specialists, Micron is the Boise-based provider of dynamic random-access memory (DRAM) and flash storage.

“How do you get the most out of your IT budget?” Wheadon asks. Does it make better sense to “put it all into one laptop, or put it into upgrading five laptops for your company?” Budget-minded IT buyers will opt for the latter strategy.

The High Cost of Cheap PCs

“A lot of folks are enticed by that initial price tag,” Wheadon says about inexpensive notebook computers with price tags as low as $350. Reality quickly sets in when they unbox those cheap PCs.

“Wait a second, I need to have a certain Windows package,” buyers are often surprised to discover, adding to the cost of the new system, says Wheadon. Newer or non-transferrable versions of required software can drive up costs, too.

“As they start to build out that machine, they find themselves spending $800 to $1,000,” laments Wheadon. Then there’s the lost productivity.

Setup, configuration and getting the new system just right can take hours, provided nothing goes wrong. Factor in some troubleshooting or a frantic call to tech support, and small business owners can end up losing a day that’s better spent trying to land that big sale or delivering great customer experiences.

Add all of it up, and that inexpensive PC doesn’t seem like such a bargain.

Like-new Performance with SSDs and DRAM

“For less than $100, you can absolutely change a system’s performance,” says Wheadon. “You can get a 120 gigabyte SSD for $69 and put the additional dollars toward DRAM.”

The combination of speedy SSD storage and the added headroom provided by additional memory can make an old system act like new. “Buyers puts it into their laptops, and instantly see that performance,” Wheadon assures. Often, just replacing a traditional hard disk drive (HDD) can make a system feel more responsive.

Of course, Crucial is by no means the only maker of SSDs. If you’re in the market, check out this list of top SSD makers from StorageSearch.

Wheadon admits that from a storage capacity versus cost perspective, SSDs lose to HDDs. For roughly the same price of the BX100, shoppers can score a comparatively spacious 1 terabyte (TB) 2.5-inch HDD. In business settings, SSDs still win in terms of value.

“People are hung up on cost-per-gigabyte,” says Wheadon. Companies, for the sake of collaboration and centralized data management and security, often place the bulk of their files in the cloud or on their own networked storage systems.

Brisk, productivity-enhancing performance trumps terabytes of storage capacity for the average worker, argues Wheadon. Waiting for what seems like an eternity for an HDD-equipped PC to boot up can make for an awkward a client meeting, he warns. “That reflects on you as a business.”

Wheadon suggests that small business owners take it slow by installing an SSD and adding more memory to a single system. “We believe that most will see an improvement.” After they’re convinced, they can upgrade five for more laptops for the cost of a single new PC.

Even IT novices can do it, he encourages. Resources abound, and his company’s website features an advisor tool that helps would-be PC technicians find compatible SSDs and DRAM for a given system. Easy-to-follow installation guides take the mystery out of PC upgrades.

Ultimately, Wheadon suggests that small business owners just take the plunge and wring at least a few more years out of their current systems while banking the savings. “It’s such a low investment to try; for $100 you can see if DRAM and SSD improves performance.”