Sleek Style for the Small Office 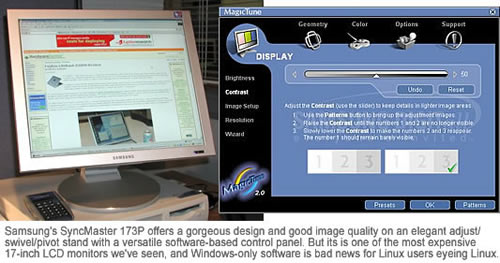 It’s been years since we’ve gone ooh and ahh over an LCD monitor. Flat panels are mainstream, even routine nowadays; having an LCD instead of CRT on your desk is no longer a swank status symbol. What’s more, retail prices in the $630 to $650 range are downright steep for a 17-inch LCD monitor today. That said, ooh. Ahh.


Apple fans gush about how that company’s iMac and Lucite-clad LCDs are museum-worthy modern art, or at least elegant desktop decoration, but the svelte SyncMaster 173P from Samsung Electronics America arguably beats Apple at its own game. For one thing, the 17-inch, 1,280 by 1,024-pixel display looks just as good from the back as from the front, showing an Apple-esque glossy white back panel and 0.8-inch-thin matte silver bezel, respectively.


The rear view is especially clean because the three cable ports — for the AC adapter, analog VGA input, and digital DVI input — are at ground level, tucked into the back edge of the lazy-susan swiveling base. An iMac-esque dual-hinge stand provides a welcome 3.25 inches of height adjustment; at first, even the highest elevation struck us as maybe an inch lower than ideal, but we soon got used to it. The monitor measures 15 by 15.8 by 9.3 inches overall and weighs just over 13 pounds.


The stand also provides tilt adjustment rivaled only by a convertible Tablet PC’s — from vertical or perpendicular to your desk (or a few degrees forward of same) all the way back to lying flat, flush, and face-up on the collapsed stand. We’re pleased to note, too, that Samsung supplies both VGA and DVI cables plus a VESA wall-mount bracket as standard equipment.


Finally, the SyncMaster 173P is a pivoting monitor, working with the bundled Pivot Pro software to turn 90 degrees from landscape into portrait mode for a spacious, intuitive view of Web or word processing pages (or, for that matter, 180 degrees into upside-down landscape mode).


It’s not just the fingerprint-resistant silver bezel that gives the 173P such a clean appearance, either. It’s the number of front-panel control buttons or dials — zero, if you don’t count the solitary, tiny on/off switch in the bottom right corner. (Holding the power button in for a few seconds also serves to switch between analog and digital input and activate the display’s auto-adjust function.)


Granted that today’s flat panels’ automatic adjustments (Samsung’s included) do an impressive job of centering and calibrating the default display, how are you supposed to personalize or customize the display — to change brightness, contrast, color, or whatever — with no buttons? With your mouse buttons: Instead of a pop-up, on-screen control menu built into the monitor, the SyncMaster 173P uses a Windows utility called MagicTune (supplied by Portrait Displays, creators of the Pivot Pro program).


Reddish for You, Bluish for Another

MagicTune, which works only with Windows 98SE, Me, 2000, or XP, uses the Display Data Channel Command Interface (DDC-CI) protocol to communicate with the PC (a few MagicTune test patterns and features are available only with analog, not DVI, connections). Available from a system-tray or Windows-desktop icon or right-click menu, it lets you adjust brightness and contrast, for example, by dragging a slider with your mouse instead of twirling a dial with your finger.


Other adjustments include clock and phase, centering, resolution (as with all LCDs, native resolution is best, but the 173P did a first-class job of scaling 1,024 by 768 images with minimal jaggies), and color calibration. The last offers both a rather complex manual mode and handy sample images for setting red, green, and blue values and white point (useful for accurate flesh tones).

MagicTune also offers the MagicBright trio of relatively low, medium, and high luminescence settings — targeted respectively at office applications, Internet or streaming video, and gaming or TV-tuner watching — found on Samsung’s CRT monitors. Readers of our other desktop LCD reviews will know we often grumble about grayish instead of white backgrounds, so you won’t be surprised to hear that we didn’t find the MagicBright feature as useful as we did when testing a Samsung CRT in 2002: The SyncMaster is rated at 270 nits of brightness, and we were satisfied with our test unit’s 80-percent-brightness default setting instead of feeling the need to crank it all the way up, but clicking the MagicBright buttons dimmed the screen to as little as 34 percent of the maximum. Even the third or entertainment setting was too dark for our tastes.


A nifty feature, however, is MagicTune’s ability not just to restore the factory presets, but to save and reload any number of combinations of settings — if, say, you like chisel-sharp contrast for editing images but prefer a softer image when working with text, or if you want to flip between brightness and resolution settings suitable for games and spreadsheets.

We’ve grown used to LCD vendors advertising whopping, 170-degree viewing angles for their displays, but Samsung has, to our knowledge, set the record by claiming a 178-degree viewing angle for both horizontal and vertical offset for the 173P. We definitely wouldn’t go that far, although you can indeed crane your neck (or just swivel the screen) well to one side without getting an airline-movie-screen negative image; the backlight is clean and even, with no bad pixels to be seen in our test unit.


Bright, vivid colors and a 700:1 contrast ratio make images pop, while an 0.264mm pixel pitch makes even small text and details sharp and legible. Using the native 1,280 by 1,024 resolution, the display was flicker-free at its default 60Hz refresh rate and rock-steady, even under office fluorescents, at 75Hz, and we noticed no ghosting or smearing while watching video or scrolling Web pages (Samsung cites a 25ms response time).


The 173P’s image quality, in short, is as excellent as its design is simple and stylish. The monitor has no audio speakers built in, so you can’t throw away your desktop speakers, but its notebook-PC-style AC adapter or power brick has nice long cords at both ends so you can place the brick on the floor or on your desk as you prefer. Like all LCDs, the display draws less power than a comparable CRT (40 watts); Samsung backs it with a three-year parts, labor, and backlight warranty.


So what’s there to say besides ooh and ahh? To be sure, the SyncMaster 173P is at or near the top of the price scale for 17-inch LCDs (or close to the bottom of that for 19-inch models). But if you’re looking for every feature (except speakers) on the checklist, from dual analog and digital input to portrait/landscape pivoting and a height-adjustable base, as well as topnotch image quality, the Samsung would be a tempting display even without the extra allure of its look-Ma-no-dials design and MagicTune software.