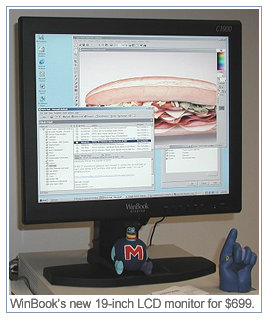 They’re still way more expensive than the familiar cathode-ray tube (CRT) monitors, but liquid liquid crystal display (LCD) monitors have lost their status as status symbols, with first 15- and then 17-inch flat panels moving swiftly into the mainstream. A big 19-inch LCD, however, is still luxurious enough to attract envious looks — and, if you look at most brands, to cost $800 to $950. But now WinBook, which made a name for itself by undercutting the big laptop brands, has decided to do the same to desktop LCD vendors. The company’s new C1900 monitor costs $699.


How does WinBook — which has also introduced 15- and 17-inch flat panels, priced at $279 and $449 respectively — pinch pennies so? You can’t tell by looking at the front of the 1,280 by 1,024-pixel display, which has a slim black bezel (not as ultra-skinny as some, but not obtrusive) and handsome, angular base.


Indeed, the base looks even better at second glance, when you find it offers not only tilt (up to 3 degrees forward or 25 degrees back of vertical) and swivel (up to 25 degrees left or right), but slides smoothly up and down for an ample range of height adjustment — it doesn’t move in all directions with a gentle touch the way Apple’s iMac LCD does, but is more maneuverable than most. And though it isn’t mentioned in the manual, a push on one corner reveals the reason for the extra elevation: The C1900 can pivot from landscape to portrait mode for a full-page, vertical view of word processing documents or Web sites.


A 19-inch, pivoting LCD monitor priced below landscape-only models would be an irresistible bargain, if not for one thing: WinBook decided not to include the display driver software required to use the pivot feature. If you want to get vertical, it’s up to you to get Portrait Displays‘ Pivot Pro software ($50 download, $60 on CD).


And while it has the pivoting capability most of its rivals lack, the C1900 lacks one feature they have: dual inputs for both today’s analog and tomorrow’s digital display cards. While there are both “Input 1” and “Input 2” labels on the back panel, there’s no digital visual interface (DVI) port — just one old-fashioned, 15-pin video graphics array (VGA) connector to be found.

Compromises You Can Live With

Setup is simple, if you don’t mind the crane-your-neck-to-insert-plugs-from-beneath exercise that many flat panels put you through; in addition to the VGA cable, there’s an AC adapter (a notebook-style external power brick) and an audio cord for the stereo speakers hidden behind the screen. The latter offer good volume but are on the tinny or hissy side; they’re better for error beeps or e-mail notifications than enjoying CDs or DVDs.

There were no bad pixels among our test unit’s 1,280 by 1,024, and while the manual lists only the usual LCD default refresh rate of 60Hz for that resolution, a tech guide on WinBook’s Web site told us the display can handle 75Hz as well. Both are bearable, but the latter looked a bit steadier under our office fluorescents.

The C1900 also does a not-too-jagged job of scaling up lower resolutions such as 1,024 by 768 to full screen size, although it was occasionally off center at system startup and its one-touch auto-adjust button often took two touches — flickering and jittering for an impatient 8 to 10 seconds each time — to yield sharp menu and taskbar text. That quirk aside, the display’s 0.294mm pixel pitch is fine enough for all but the most finicky eyes, and we have no complaints about its satisfactorily wide viewing angles.

The on-screen control menus are adequate, though the down-sideways-plus-minus navigation button scheme takes practice (and we’re unnerved that the logo beside the buttons reads “WinBook display” rather than just “WinBook”; we know it’s a display, thanks). Choices range from brightness, contrast, and audio volume to clock phase, horizontal and vertical position, and a choice of three prefab or custom RGB color temperature settings.

The WinBook boasts an above-average 300 nits of brightness and 350:1 contrast ratio — indeed, turning the latter up full blast almost completely washes out Windows dialog boxes. Its 25ms response time, if still not fast enough to satisfy hardcore gamers, is noticeably less prone to ghosting with moving objects or video than the LCDs of a couple of years ago (although mouse-wheel auto-scrolling through Web pages was slightly flickery).

Colors are clear, though it was hard for us to distinguish the darkest shades in our DisplayMate test screens — the thrifty C1900 is a 6-bit rather than 8-bit LCD, using its 262,000-color palette to simulate a true 16.7-million-color range via dithering, so fine artists and image-editing aficionados will want to aim higher.

But if you’ve been longing for an LCD monitor for everyday office use, and convinced you can’t afford a 19-inch example, you’re WinBook’s ideal customer. The economy measures are plain to see — no digital input; a pivoting monitor without pivot software; a one-year warranty versus bigger brands’ three years. But budget-minded small businesses will find the C1900 attracts its share of compliments.