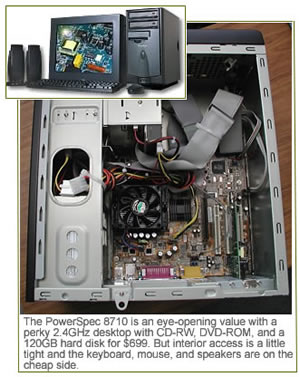 Last week, the market watchers at NPD Group announced that in May, notebook PC sales passed the dollar amount of desktop sales for the first time. These days, desktops are decried as low-profit-margin, generic-commodity products; desktop sellers are scrambling to diversify — Dell putting its name on PDAs and printers, Gateway adding everything from home electronics to corporate servers.


So why has WinBook, a vendor best known for affordable notebooks, gotten into the desktop market with models bearing the PowerSpec brand? Because with the economy the way it is, you can’t afford to turn away potential customers — the company says it found that 40 percent of its laptop owners planned to buy a desktop within the year — and because WinBook knows a thing or two about catching shoppers’ eyes with economy models.


Five of the seven PowerSpec PCs are priced under the magic $1,000 mark — although an $1,199 model boasts not only Intel’s 2.8GHz Pentium 4 Hyper-Threading but DVD+/-RW recording — and even the $399 starter model offers 256MB of memory and a CD-RW drive (along with what could be collectors’ last chance at an AMD Duron processor).

We know from our quarterly surveys that almost everybody offers an impressive desktop for $999 nowadays, but were curious to split the difference between that price level and entry level.


WinBook obliged with the $699 PowerSpec 8710 — a basic-black minitower with Intel’s 2.4GHz (533MHz front-side bus) Pentium 4, 512MB of DDR266 memory, a 120GB hard disk, and both DVD-ROM and CD-RW drives. As with most economy desktops, graphics are handled by the system chipset (the SiS 651), but unlike some, you’ll find an AGP 4X slot for game-worthy upgrade cards.


With those specs, the PowerSpec turns out to be a solid deal compared to some bigger names: We configured similarly equipped Dell Dimension 4600 and Gateway 500S systems for over $900 apiece (although both had quicker DDR333 memory and the Dell offered a free DVD+RW upgrade), and a Sony Vaio RS300 with a smaller hard disk for $800. For the record, HP just announced a comparable Pavilion a220n with AMD Athlon XP 2600+ power and GeForce4 MX integrated graphics for $679, but overall the PowerSpec is clearly competitively priced.


If you want to add a monitor, WinBook offers 15-, 17-, and 19-inch LCDs for $299, $399, and $649 respectively. We reviewed the C1900, in January (when it cost $50 more) and found it a handsome analog-input-only flat panel for everyday use, or users more likely to appreciate its crisp looks and adjustable base than bemoan its dithered rather than true-color palette for professional image editing

Bang for the Buck

The PowerSpec section of WinBook’s Web site looks slightly skimpy, without the technical details supplied for its notebooks, but the company reassures shoppers by posting the nuts and bolts of its tech support (7-day, 17-hours-a-day toll-free phone support) and one-year parts, labor, and on-site service warranty. Novices prone to accidentally deleting drivers or trashing partitions will find emergency-restore CDs in the box, but we chalked up a minus mark when we tried booting one only to get an “Error! PC System not supported” message.


The PowerSpec 8710 minitower itself looks pretty generic, apart from two USB 2.0 ports at the bottom front. Two more are at the rear, along with audio jacks; parallel, serial, Ethernet, VGA, and PS/2 mouse and keyboard ports; and an old-school joystick port (we haven’t seen many of the latter lately, since most of the game controllers we’ve seen lately have used USB). No IEEE 1394 (FireWire) port is provided.


Not-so-pretty generic are the PowerSpec’s supplied peripherals: a comfortably sculpted but scratchy mechanical (rolling-ball) rather than optical mouse; a somewhat rattly, plasticky keyboard with no frills such as multimedia, program-launching, or sleep-mode buttons; and two low-fi stereo speakers that supplied a static background buzz. The mouse has the scroll wheel that the very cheapest rodents omit, but we suspect most users will want an entirely different set of desk accessories.


Removing two screws lets you lift off the side panel and check out the FIC VI35L motherboard. Access to the expansion slots — an empty AGP slot and three PCI slots, two empty and one holding a 56Kbps Winmodem — is wide open, though the memory slots are buried under drive and power cables and the drive bays are crowded: The Lite-On 16X DVD-ROM and 52/24/52X CD-RW drives are caged up with the power supply, with one empty, front-accessible 3.5-inch bay between them and the stacked 1.44MB floppy and 120GB Maxtor DiamondMax (5,400 rpm) hard disk.

True, the PowerSpec’s Pentium 4 doesn’t have Hyper-Threading or an 800MHz front-side bus. But if you think a $699 PC is only good for Web surfing or word processing, you’ll be pleasantly surprised by the 8710’s sprightly performance — the system motored through office applications and DVD movies in more than satisfactory style, keeping pace with other 2.4GHz (and even a few 2.8GHz) systems we’ve tested with an Office Productivity rating of 141 in BAPco‘s SysMark 2002 benchmark and FutureMark PCMark 2002 scores of 5,720 (CPU), 4,191 (memory), and 821 (hard disk).


Even the SiS 651 integrated video (which turns the 512MB onboard memory into 480MB as far as Windows is concerned) proved, well, tepid but not as crippled as Intel’s economy-chipset Extreme Graphics. The PowerSpec managed a 3DMark 2001 SE Pro score of 1,281, and a darn-near-playable 33 frames per second in Quake III Arena in High-Quality 1,024 by 768 mode. That beats most entry-level desktops we’ve tested — most of which, again, lack the AGP slot required for stepping up from The Sims to Unreal Tournament 2003.


It doesn’t earn a rave review, but the PowerSpec earns our respect: We’ve made similar gripes about chintzy keyboards and mice when testing systems with more famous names, and we repeatedly found ourselves thinking of the 8710 in terms of an $899 or $999 PC instead of a $699 one. It looks like WinBook’s joining the desktop market is a win-win for value shoppers.