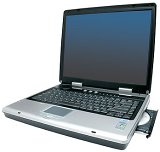 We know it’s a challenge to configure a fully loaded laptop for a thousand bucks, even plus or minus a C-note. One common compromise is a fully loaded briefcase: a heavy desktop-replacement rather than slim line form factor suitable for the small-business traveler.

The V220 is no exception, measuring 11.2 by 13.1 by 2.1 inches and tipping our postage scale at 8.6 pounds &#151 not quite the burden of some nine- or 10-pound jumbo-screened transportable PCs, but too bulky for the daily commuters to whom WinBook and other vendors target their trimmer models. The AC adapter adds 1.2 pounds.

Unfortunately, its size is only the second reason to see the V220 as more of a space-saving desk sitter than a frequent flier; the first is marginal, minimal battery life. Despite a good-sized lithium-ion pack, the WinBook lasted barely an hour and 15 minutes in several real-world work sessions, although we once managed 92 minutes before we heard the low-energy warning beeps. A spare battery is $169.

The Big Picture
WinBook wins points for the system’s bright 15.0-inch screen, which gives a clear, colorful view of good old XGA-resolution (1,024 by 768) images and letterboxed DVDs. It doesn’t offer the widest viewing angles we’ve seen, but it’s bright enough for adequate contrast at the top three or four &#151 instead of the more typical top one or two &#151 of its eight brightness settings.

Thumbs up, too, for the V220’s keyboard and touchpad. The latter has a handy scroll rocker between its mouse buttons, as well as a flick-to-scroll area along the right edge, while the keyboard offers full-sized comfort and a smooth typing feel. We’d vote to swap the special-shift Fn key and Ctrl key in the bottom left corner, giving Ctrl the easier-to-stab-at outside position, but otherwise we like the layout, including dedicated Home, End, PgUp, and PgDn keys and bonus buttons to launch your Web browser and e-mail client.

The CPU May Be Old, But It’s Spry
It’s cute to watch the cooling fan above the keyboard spin up as you switch on the computer, but it and the two other fans are potent white-noise generators while you work &#151 and even though they don’t all run all the time, the fans are audible from across the room.

The CPU that requires such cooling is a 2002-vintage, 2.8GHz Pentium 4 with 512K of Level 2 cache and quaint 400MHz bus speed. But pairing the processor speed with 512MB of DDR333 memory and a 60GB Fujitsu 4,200-rpm hard disk still yields decent performance for everyday applications. A lot less competitive, however, is the slow, outdated graphics capability of the SiS 661FX chipset. This isn’t a notebook 3-D gamers are likely to have any interest in.

Oops, We Did It Again
The V220’s Lite-On combo drive is a smooth 8X DVD-ROM, 24/24/24X CD-RW performer, though its center-mounted eject button had us repeatedly, accidentally reopening the drive in the very act of pushing it closed. It’s on the right side of the WinBook’s case, next to the 56Kbps modem jack; microphone and headphone jacks, one Type II PC Card slot, one IEEE 1394 port. You’ll find two USB 2.0 ports on the left side and parallel, VGA, TV-out, and Ethernet ports at the rear. An external USB floppy drive is a $69 option.

Two prop-up feet elevate the notebook’s rear corners when it’s on your desk, but they poke painfully into your knees when it’s on your lap. In addition to Windows XP Home Edition (an otherwise identical Win XP Pro model is $99 more), you get InterVideo’s WinDVD 4 player and the trial version of Symantec’s Norton AntiVirus 2004.

Its ponderous weight and poor battery life earn the WinBook V220 only a two-star review, but its low price earns it a third star for value hunters &#151 it’s a good $300 less than a comparably equipped Dell Inspiron 5160, whereas giving another $300 to WinBook gets you the V240 model with 3.06GHz Pentium 4 power and a DVD1RW drive. It’s a bruiser, but it’s a bargain. (Alternatively, though we haven’t seen it in person, we notice Gateway listing a $1,000 model M520S that matches the V220’s specs, except for a smaller 40GB hard disk, but weighs a pound less &#151 Ed.)