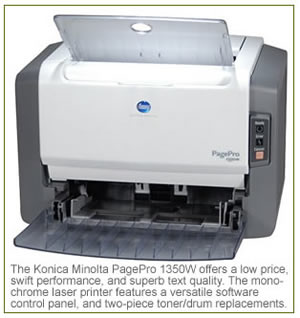 When we reviewed the HP LaserJet 1012 and Lexmark E220 a couple of months ago, we remarked that the price of an entry-level or personal laser printer — from those vendors, Samsung, Brother, or whoever — seems to have been stuck at $199 for a while. Cut to scene of Konica Minolta exec cracking a whip over terrified engineers and accountants — “Lower, damn you!” The successor to the popular Minolta-QMS PagePro 1250W costs just $180.


To be sure, the Konica Minolta PagePro 1350W has more than a slightly pared price and a new corporate name to offer. The Windows 98SE/Me/2000/XP-compatible monochrome laser boasts a rated speed of 21 pages per minute for letter-sized stock (20 ppm for A4 pages), topping the 15- to 18-ppm advertised performance of its rivals. Its maximum duty cycle is a hefty 15,000 pages per month, and its maximum resolution is a suavely sharp 1,200 by 1,200 dpi.


It’s easy to find desk space for the compact PagePro, even if it’s destined to share your desk with a color inkjet printer — the 17-pound printer has roughly a 16 by 16-inch footprint with its fold-down paper tray open, shrinking by a few inches with the tray closed.


Both parallel and USB 1.1 interfaces are standard, though there’s no cable in the box. On the other hand, Konica Minolta wins points for preinstalling the toner cartridge — although it promptly loses them with the old low-priced-printer scam of supplying a penny-pinching, short-lived (1,500-page) “starter” cartridge instead of a regular cartridge.

Setup and operation are kindergarten simple, conducted mostly through a software control panel — there are no front-panel controls except a couple of status LEDs and a job-cancel button. The software utility offers helpful status indicators and a good variety of watermark, N-up or booklet printing, and manual duplexing options, as well as three resolution or quality settings — 1,200 by 600 dpi (the default), 600 by 600 dpi, or 1,200 by 1,200 dpi.


There’s also a toner-saver mode that stretches cartridge life by printing in faint gray instead of black, and a “midnight mode” that slows output while reducing printer noise. On the latter topic, we found the Konica Minolta’s whirs and whines relatively loud for a laser, though not too noisy for a conversation nearby; the shush mode was indeed noticeably quieter during the print jobs we tried, although it didn’t affect the throat-clearing, service-elevator noise the PagePro made at the beginning of most tasks, and we liked the driver’s dialog-box option to automatically shift into “midnight mode” at specified times (say, between 9:00 p.m. and 8:00 a.m. if your spouse is sleeping in the next room).


Being a laser, the 1350W offers gorgeous business-class text without bothering with maximum resolution — and, while there’s no real performance difference between the first two quality options, 1,200 by 1,200 mode cuts print speed roughly in half, slowing five pages of Microsoft Word text from 32 seconds to 51 and our one-page Word business letter with company logo from 17 seconds to 26.


We were even more dismayed that the printer hung up and the status screen popped up with a buffer overflow message when we tried printing an 8 by 10-inch digital photo in 1,200 by 1,200 mode — the PagePro’s 8MB of onboard memory is not expandable.

Terrific Text, Not the Greatest Graphics

Of course, any monochrome laser printer is meant for workhorse letters and reports instead of the suitable-for-framing photos of today’s elite color inkjets. But we were frankly disappointed in the quality of our digital-camera image in the 1,200 by 600 dpi default mode — although it took a swift 30 seconds to print, it was a little dark and grainy for our taste.


Also, both photos and solid areas in Acrobat PDF files and PowerPoint slides showed noticeable banding. Tinkering with the software driver’s brightness and contast sliders helped a little, but we’ve still got to rate the PagePro’s graphics quality a step below that of the low-cost black-and-whites we’ve tested from Samsung, HP, and Lexmark lately.


That said, text was dark, sharp, and smooth for banner headlines, tiny footnotes, and body copy alike. And while, despite its onboard Naltec N1 processor, the Konica Minolta seemed highly sensitive to sharing the CPU of our host PC — the difference between leaving Word alone and loading Internet Explorer during a 20-page job on our plodding Pentium III/550 desktop was about a 40-percent increase in print time — its 21-ppm engine indeed outspeeds the abovementioned LaserJet 1012 and Lexmark E220 for heavy-duty work.


Though its 17-second stopwatch time narrowly trailed those nominally slower printers when producing our one-page letter with letterhead, the PagePro (in default 1,200 by 600 dpi mode) purred through our 20-page Word document in a swift 1 minute and 24 seconds, and printed six PowerPoint slides in 1 minute and 20 seconds. Interestingly, while its time of 3 minutes and 50 seconds easily bested its under-$200 rivals in our 55-page Adobe Acrobat test, it was more than a minute slower than a midpriced Lexmark rated at 22 ppm which we tested a year ago.

Once you get past the grumble of the half-empty starter cartridge, the Konica Minolta also tops its peers when it comes to keeping a lid on consumable costs, probably because of the two-piece imaging-cartridge design that lets you replace the toner cartridge without throwing away the imaging drum.


The drawback is that it’s a bit more labor-intensive — it took us maybe five minutes to learn the trick of flipping a latch lever and separating and reuniting the two pieces (it’s a little awkward to deal with the toner cartridge when apart from the drum cartridge and the latter’s carrying handle, and you’re not supposed to leave the latter exposed to light for long).


The payoff is that a toner cartridge rated for 3,000 pages is a slightly thriftier-than-thou $78, with a 6,000-page long-life toner available for $126. The imaging drum, rated for 20,000 pages, costs $105. Konica Minolta confesses that your mileage may vary, in that rated page counts drop 10 to 20 percent if your work involves more stop-and-start printing (one- or two-page rather than continuous jobs).


Paper-handling is simple but adequate — the fold-down front tray holds up to 150 sheets, with smooth-feeding horizontal rather than inkjet-style vertical paper loading, and pages perform a near-U-turn to exit face down on top of the printer, propped by a plastic tray that, like other entry-level printers’, strikes us as good for somewhat less than its advertised 100-sheet capacity. There’s no special slot or straight-through path available for envelopes or exotic stock.


Overall, the PagePro 1350W is a solid addition to the ranks of petite, under-$200, best-for-text monochrome workhorse lasers, earning points for its higher monthly duty cycle and more fiscally and environmentally sound two-piece toner/drum design. On the minus side, its visibly banded graphics and slightly noisy operation keep it from blowing away the competition. Could the line between cutting fat and muscle lie somewhere between $199 and $180?