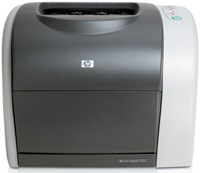 Color laser printer prices continue to drop, and SMBs stand to reap the benefits. Priced at just $499, Hewlett Packard’s new Color Laser Jet 2550L offers businesses &#151 that could previously only afford color inkjet printing &#151 a step up to laser quality printing. Naturally, you can’t buy the sun, the moon and the stars for that price &#151 let’s take a look at what you can expect.

The 2550L’s advertised speeds of 20 pages-per-minute in black and white and four ppm for color clock in at the low-end of the color-laser class (although its 30,000-page monthly duty cycle is ample). While the printer provides USB 2.0 and parallel interfaces, it doesn’t come with an Ethernet print server. If you need a printer for your network, try the HP 2550LN priced at $599.

The small paper tray capacity falls seriously short of workgroup specifications: Instead of a photocopier-style drawer, you get is an inkjet-style, fold-down paper tray that holds a skimpy 125 sheets. The pages do a half loop to exit face down atop the printer (although HP earns points for the fold-down back panel that offers a straight-through path for envelopes or special stock).

The 2550L measures 18- by 19-inches, stands 13 inches tall and weighs slightly less than 50 pounds. Its rotary technology makes a bit of clunking noise as the toner-cartridge carousel rotates through four print passes for each color page. You probably won’t want to put it next to your phone.

You won’t find an LCD menu &#151 the 2550L alerts you through various blinking lights on the control panel. Following directions in HP’s printed guide to set up the printer. Tossing aside plenty of plastic bags, orange plastic plugs and strips of tape along the way, open the hood and insert first the imaging drum and then the cyan, magenta, yellow and black toner cartridges, briefly closing the hood and pushing a button after each of the first three toners to bring the next slot to the top of the carousel.

Consumable costs break down thusly: a 5,000-page black-ink cartridge costs $79, the 4,000-page color-ink cartridges sell for $95 each. After 10,000 pages or so (technically, after 20,000 black or 5,000 color), you’ll have to replace the imaging drum, priced at $165. That works out to about 2.4 cents per page for black and 12 cents for color, a bit high by enterprise standards but a fraction of the price of desktop inkjet printing. HP’s software driver offers the usual, helpful variety of watermark, N-up, size-to-fit, and manual duplex- or booklet-printing options.

Here’s where the printer’s low price shows the most &#151 speed. Despite the presence of a 264MHz Motorola processor and genuine PCL 6 and PostScript 3 software drivers, the 2550L took just under 18 minutes to print the 55-page Adobe Acrobat manual. Admittedly, it was hooked up to our poky Windows 2000 desktop at the time, but even so, it remains significantly slower than a $699 color laser printer such as the Lexmark C510, which finished in less than nine minutes.

On the other hand, it printed a one-page Microsoft Word business letter with spot-color, company-logo letterhead in a competitive 35 seconds, though its time for 20 pages of black text trailed other under-$1,000 color printers (and most under-$200 monochrome ones) we’ve tested &#151 two minutes and 35 seconds.

Six full-page PowerPoint slides with white backgrounds printed in just under two minutes, although the same number of slides with dark backgrounds took a plodding 5 minutes and 45 seconds. Our eight by 10-inch digital-camera photos appeared in an average one minute and 53 seconds.

While its speed is under whelming, the 2550L’s print quality impresses. The 600 by 600 dpi engine’s text was dark and sharp in big and small font sizes alike, as we expect of all laser printers, but we did a double-take at the Acrobat and PowerPoint printouts: Even using cheap copier paper, solid colors and gradients looked bright and clean, with only minimal banding &#151 noticeably less than most color and far less than most monochrome lasers we’ve seen.

And while they were predictably no match for the vividness and detail of glossy inkjet prints, digital photos were downright attractive instead of grim and grainy. Compared to its older models, HP says the 2550L takes advantage of new fuser technology for a wider gamut of brighter colors.

This printer isn’t meant for everyone &#151 certainly not for anyone who needs to print thousands of pages a month &#151 quickly. It’s not a fast printer. However, the 2550L provides great-quality laser prints and can handle hundreds of copies per month at a price that’s budget friendly. It’s time to retire that inkjet printer.