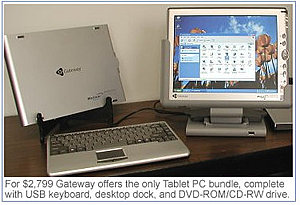 Do we go with the head or the heart on this one?


Microsoft’s Tablet PC push is all about taking pen-based, clipboard computing out of its various vertical-market niches — doctors making rounds, insurance adjusters filling out forms at accident sites — and into the business mainstream. And using the Gateway Tablet PC, you can easily become a believer: You’re taking notes in a board meeting, not bothering coworkers with a clicky keyboard but smoothly writing on the three-pound tablet in your lap — even if the meeting stretches past the three-hour mark.


When the boss asks a question, you alone have the answer, using the system’s 802.11b wireless link to retrieve a file or check an e-mail message or Web reference. When the meeting’s done, you pop the tablet into its docking base and use the attached keyboard and DVD-ROM/CD-RW drive for a spell of desktop work with your favorite Windows programs, mostly using an external monitor but keeping your browser open on the tablet LCD alongside. In short, the Gateway is not just for scribbling and sketching; it adds scribbling, sketching, and enjoyable mobile convenience to a genuine desktop alternative.


Unfortunately, it has two drawbacks. The first is that, like other Tablet PCs of the “slate” (no keyboard) as opposed to “convertible” (notebook with reversible screen) style, it’s of limited use as a laptop alternative — no, Windows XP Tablet PC Edition’s handwriting recognition isn’t bad, but it’s no substitute for a keyboard for more than a few minutes’ writing or editing work.


The second is sticker shock: Gateway deserves credit for offering the Tablet PC only in a fully usable bundle, complete with USB keyboard, desktop dock, and DVD-ROM/CD-RW drive, but the price comes to $2,799. These days, that’ll easily buy you both a capable desktop and notebook PC, both with more performance than the modest 866MHz mobile Pentium III-powered Tablet. So while the heart says “Cool!”, the head asks, “Do you really need handwritten notes and diagrams?”

The Best, Biggest-Screened Slate
The Gateway Tablet PC isn’t really a Gateway product; it just puts the direct vendor’s logo next to that of startup Motion Computing, which sells the same slate as the Motion M1200 (for the record, charging $40 less for a comparable bundle, though Gateway offers a far stronger support infrastructure; both vendors provide a minimal one-year warranty).


While ViewSonic and Fujitsu, among others, offer slate-style Tablet PCs with 10.4-inch screens, Motion opted for an easier-on-the-eyes 12.1-inch, active-matrix LCD with 1,024 by 768 resolution, switchable (like all Tablet PCs) from landscape/horizontal to portrait/vertical orientation. It’s in a slightly hefty but well-balanced, easy-to-carry slab that measures 11.7 by 9.5 by 0.9 inches and weighs 3.3 pounds — 3.9 counting the protective, hard plastic lid that snaps over the LCD and can be snapped onto the system’s back when in use. (Though Gateway includes plenty of other goodies, it omits a carrying case.)


The screen is bright and colorful, even with the backlight turned down one-quarter or halfway to save battery power. Its viewing angle, however, is narrower than lounge-chair or hammock users would like — sometimes we stretched out on the sofa or sat up in bed for a spot of note-jotting, only to find we had to prop our knees up near vertical to see the display clearly.


There’s a 40GB Hitachi hard disk and 256MB of memory (expandable to 1GB, though Gateway’s Web site oddly lists no upgrade options) under the hood, along with Intel’s 830MG integrated graphics chipset and an 802.11b Mini PCI wireless networking adapter. Along the bottom are docking connector, 56Kbps modem, 10/100Mbps Ethernet, VGA monitor, one FireWire, and two USB ports plus headphone and microphone jacks; one Type II PC Card slot is at the right edge.

Not Fast, But Pretty Fancy
Anyone accustomed to recent 2.0GHz notebooks will need to readjust to the M1200’s performance — especially on battery power, when Intel’s SpeedStep technology slows the 866MHz Pentium III-M to just 400MHz. (Applications ran and responded smoothly enough, but it’s been a while since we waited 25 seconds for a program to load, as we did with Corel’s nifty Tablet PC drawing package, Grafigo.)


Plugged in for benchmark testing, the Tablet PC performed about as well as the 1.0GHz Pentium III laptops we reviewed in the summer of 2001 — which means, if you want to be critical, that it’s the slowest PC we’ve tested since then. The system puttered to a BAPCo SysMark 2002 Internet Content Creation score of 94, with Futuremark PCMark 2002 numbers of 2,729 (CPU), 1,596 (memory), and 499 (hard disk).


While we don’t expect any Tablet PC to satisfy the 3D game fanatics, Microsoft does tout these things as able to be your primary PC, so we were hoping for something better than the i830MG graphics controller for desktop image (let alone video) editing sessions. Its 3DMark 2001 SE Pro score of 660 is more or less miserable, as is its 24 frames per second in the venerable Quake III Arena (High Quality 1,024 by 768 mode) benchmark.

Spare Parts
System setup is straightforward, though you may be daunted by the sheer number of pieces in the box — the Gateway is the first computer we’ve seen, for instance, that comes with three AC adapters. One is for the slate; one is for the external AOpen 8X DVD-ROM and 24/10/24X CD-RW combo drive, which plugs into the FireWire port (and caused our only stumble during testing when we found the system can’t boot from the FireWire drive; Gateway’s e-mail tech support was no help, but a notice on Motion’s support site says a BIOS upgrade is in the works).


The third is for the supplied FlexDock, a desktop base that duplicates the system’s ports and connectors (modem and PC Card excepted) at its rear and adds a third USB port up front. A sliding stand lets the slate tilt back from vertical so you can still write on it while it’s docked; in a clever feature, the docked system senses and switches between portrait and landscape mode if you swivel the LCD.


You can use the LCD, an external CRT monitor, or both at once, either as duplicates or a single, expanded display — although since the pen only works on the LCD, you’ll need to use the keyboard’s touchpad to drag program windows from one screen to the other. The compact keyboard has a flat but comfortable layout and typing feel. All told, the FlexDock is too bulky and heavy to pack for travel, but certainly beats the provided, folding plastic easel that’s an alternate way to prop the Tablet upright, but that gets in the way of connecting cables to its bottom. (The easel is holding the snap-on lid in the photo above.)


The Gateway bundle also includes a second, spare digitizer pen — the special stylus required for a Tablet PC — and a handful of spare points for the pens, plus a cleaning cloth for the LCD. InterVideo’s WinDVD player and Ahead Software’s Nero CD accompany the preinstalled Windows XP Tablet PC Edition; Microsoft Office XP Professional is a $300 option.