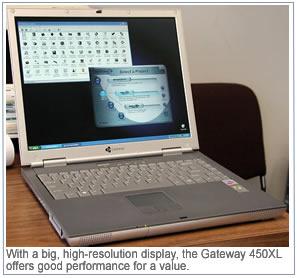 There’s a place for flashy style, and there’s a place for good plain value. The Gateway 450XL notebook uses Intel’s new Centrino bundle of Pentium M processor, chipset, and 802.11b wireless networking adapter, just like the Sony Vaio Z1A we tested a week ago. The Sony is a sleek, slimline conversation piece, while the Gateway, though not overweight, is a traditional laptop slab.


But the 450XL has a faster Pentium M chip — 1.5GHz versus 1.3GHz — and graphics processor — ATI’s Mobility Radeon 7500. It has a bigger screen — 15.0 versus 14.1 diagonal inches, which makes its 1,400 by 1,050-pixel resolution noticeably easier on the eyes. It has a swappable-bay design that supports a wider choice of storage devices.


Have It Your Way

For the record, our 450XL test system came to $2,109 with three options: $20 for a higher-capacity replacement for the standard lithium-ion battery; the same for a modular 1.44MB floppy drive to swap with the DVD-ROM/CD-RW combo drive; and $70 for a digital-camera or PDA flash-card memory reader (supporting MultiMedia Card, Secure Digital, Memory Stick, SmartMedia, CompactFlash, and IBM Microdrive formats) that fits in the same modular bay.


The 450XL is a medium- to large-sized laptop (10.7 by 13.3 by 1.3 inches), but no more than medium weight — 6.2 pounds with the standard battery and optical drive, a few ounces more with the stronger battery; the AC adapter adds a pound to its briefcase weight. We found it comfortable even for crossed-legs lap use, though the small feet on the bottom can poke your knees.

Since its Pentium M processor is clocked 200MHz faster than the Vaio Z1A’s, we expected the 450XL to score higher in our FutureMark PCMark 2002 benchmarks — and the laptop indeed posted superior numbers of 4,909 (CPU) and 4,335 (memory), though the 40GB, 4,200-rpm Toshiba hard disk earned an undistinguished 428.


However, the 1.5GHz Gateway finished narrowly behind the 1.3GHz Sony in the BAPco SysMark 2002 application-suite race, with Internet Content Creation and Office Productivity scores of 168 and 99, respectively, yielding an overall rating of 129. That’s not earthshaking, but perfectly competitive for everyday applications with 1.6GHz or 1.7GHz mobile Pentium 4 notebooks we’ve tried; indeed, its 400MHz bus and 1MB of Level 2 cache are rapidly making the Pentium M one of our favorite CPUs.


And Gateway earns points for its choice of ATI’s Mobility Radeon 7500 graphics accelerator with 32MB of DDR display memory (though we noticed the AGP controller also borrowing 56MB from system memory). The system’s 3DMark 2001 SE Pro score was a well-above-average 4,076, and it managed a perky 77 frames per second when playing Quake III Arena in High-Quality 1,024 by 768 mode. When it’s time to shut down Outlook or PowerPoint for a little DVD-viewing or game-playing relaxation, the 450XL won’t let you down.


Indeed, though application menus and toolbar icons still looked small to our baby-boomer eyes, the Gateway’s 15.0-inch, active-matrix LCD made 1,400 by 1,050 resolution much more legible than the 14.1-inch Sony screen. The SXGA+ display looked clean and sharp from all viewing angles, and adequately bright at all but the bottom two or three of its eight brightness settings — downright sunny at the top setting. Also comfortable, albeit with a bit of a, well, generic feel, are the 450XL’s keyboard (with dedicated Home, End, PgUp, and PgDn keys as well as cursor arrows) and touchpad.

We noted in our Vaio Z1A review that getting a Centrino notebook, for all the good performance of the Pentium M and smooth operation of the Intel Pro Wireless/2100 802.11b Mini PCI WiFi adapter, doesn’t guarantee you the remarkable battery life that Intel is hyping. And to be honest, we were disappointed by our results with the 450XL’s standard (six-cell, 3,800 mAh) lithium-ion pack: just over two hours in real-world work (mixing media play and software installation with low-demand word processing) sessions, only 100 minutes in our PCMark 2001 CPU/hard disk/memory/DVD test loop.


For that reason, we think the optional eight-cell, 4,200 mAh battery is $20 well spent: It lasted two and a quarter hours in the PCMark rundown, and a respectable three hours and 10 minutes in our hands-on sessions (including HwC’s dreaded “wipe the hard disk and reinstall the factory software” test).


In a market where capable if bulky economy laptops cluster between $1,000 and $1,300, is there room for a $2,019 (with the bigger battery) notebook that’s neither an executive slimline nor ultra-powerful desktop replacement? We think so, because the Gateway 450XL combines a big screen and ample amenities with considerably less weight and longer battery life than the desktop-class, desktop-CPU crowd. It doesn’t do any one thing fabulously, but it does everything well.