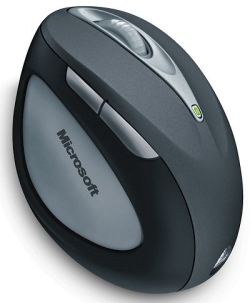 We review half a dozen mice a year, and swapping the previous one for the next is never a big deal (although uninstalling and weeding the former out of the Registry is). Usually we adjust our grip by a few millimeters, practice clicking the buttons a few times, and are accustomed to the new rodent in a matter of minutes or at most one or two hours.


We didn’t feel comfortable with the Microsoft Natural Wireless Laser Mouse 6000 for four days. Then we felt very comfortable indeed.


Priced at $80, the Natural 6000 — not to be confused with the Wireless Laser Mouse 6000, Wireless Notebook Laser Mouse 6000, and Laser Mouse 6000 in Microsoft’s glutted lineup — marks the debut of an ergonomic mouse alongside the company’s ergonomic keyboards. Like other mice designed to cradle your right hand, it provides a slightly protruding shelf or thumb scoop on its left side, along with slightly concave buttons for resting your index and middle fingers.


Unlike other mice, it’s noticeably heavy — 6 ounces with its two AA batteries — and big — imagine holding a softball. Or rather, half a hemisphere carved out of a softball: Seen from the rear, the right-hand side of the mouse slopes down like a steep hill, so your hand is at about a 45-degree angle to your desk instead of resting horizontally just above it.


Sit At Attention
As we said, this takes some getting used to. One quirk is pushing the mouse forward with the butt of your palm instead of a cupped hand. Another is deciding where to put your pinky — the mouse curves back inward at the bottom, but we weren’t accustomed to including the little finger in our grip, as if starting to make a fist, instead of leaving it idle.


It’s also important to keep your elbow at a 90-degree angle, with your wrist a bit above the desk. This means sitting up straight — when we slipped into a slouch or even a modest lean backward, the Natural felt unnaturally awkward, and our shoulder felt downright painful.

During our first days with the 6000, it felt as if we were moving the mouse pointer so slowly and carefully that what used to be a split-second, instinctive flick — right-clicking to bring up a context menu, then swooping down to left-click one of the choices, for instance — seemed to take five minutes. Tossing away our mouse pad for a bare desktop made the device feel quicker and more responsive, as did a day or two of trading our usual, unconscious mouse moves with conscious practice to increase our speed and relearn skills such as the right-left sequence above.


But by the third day, we were feeling pretty good. And by the fourth, we were enjoying the mouse very much: The design really does make a difference in wrist comfort, and having the hand at a 45-degree angle feels noticeably nicer than parallel to the desk.


Following current fashion, the Natural provides grip-friendly, rubbery surfaces at the sides (cool design feature: the soft plastic on the left is transparent, showing the Microsoft logo beneath as if behind a window). Two buttons sit above the thumb at the mouse’s highest point — the crest of the hill, so to speak.


Such thumb buttons are usually for Forward and Back navigation while browsing through Web pages, and Microsoft’s IntelliPoint software driver lets you configure them as such, whether in all applications or specific programs (so the button that serves a Back function in your browser can perform an Undo in your word processor).


But by default, while the Back button serves its usual purpose, the Forward clicker summons IntelliPoint’s handy on-screen magnifying glass or zoom viewing pane. You can resize the latter as well as dragging it around the display to examine an image or other detail at up to 5x magnification.


The magnifier is not new to Microsoft mice, but the default function of clicking the scroll wheel is: What the company calls Instant Viewer summons a picture of your desktop with miniature versions of active application windows arranged tile-fashion, so you can click on one (the window beneath the pointer appears a bit bigger than the others) to switch among programs.

The thumbnail display takes two or three seconds to appear — and for us, sometimes two or three tries to press the wheel straight down without tilting it into a horizontal scroll, as well as occasionally including a black window instead of rendering the thumbnail preview. But it’s a clever Win XP imitation of Windows Vista’s famous flipping through translucent program panes, and we soon found ourselves using it instead of the old Alt-Tab keystroke.


As mentioned, the Natural follows Microsoft’s other high-end mice in offering a fore-and-aft-rotating scroll wheel that also tilts left or right to scroll horizontally in too-large-for-the-screen spreadsheets or images. As with those mice, you’ll grumble that IntelliPoint lets you reprogram the buttons but not reassign the left or right tilt to another function the way Logitech’s mouse driver does. (Our mouse came with a CD containing IntelliPoint 6.01; a newer version 6.1 was a 6.5MB download from Microsoft.com.)


Set Cruising Speed
You may also grumble that the scroll wheel rotates without ratcheting or clicking, so it can be difficult to move an Excel worksheet or Outlook daily schedule up or down by just a few rows or to select a particular weapon in a game. The 6000’s speed and handling, by contrast, should please gamers with its fast response and the software-driver option of boosting precision or slowing the pointer from 90 percent to as little as 10 percent of normal movement. A Gaming Toggle feature allows you to assign a button a macro of up to 64 key presses or key combinations.


Speaking of Microsoft’s high-end mice, the Natural joins them in using a more precise (1,000 dpi) laser instead of LED optical engine that kept up with our fastest swoops and scribbles. It also uses Microsoft’s venerable 27MHz radio-frequency technology instead of a Bluetooth connection to its USB receiver; wireless range is adequate for all but the largest rooms, but we’ve encountered interference issues with a desk cluttered with electronic equipment in the past. No such snags affected our test unit.


According to Microsoft, two AA alkaline batteries should last the Natural for about six months. A glowing LED on the mouse’s top as well as an indicator in the IntelliPoint software warn when power is running low, but we were mildly surprised to find no on/off switch to halt the mouse’s battery drain while you’re away on a weekend or vacation.

Like most pointing devices, the Natural Wireless Laser Mouse 6000 is easily found for less than its suggested retail price; it took us just a minute to find online retailers offering the $80 gadget for $65 or $70. That’s still toward the top range of the mouse market, so you’ll want to consider your budget as well as the Natural’s slight learning curve or demand for change in habits (both in mouse grip and seating posture). But if you’re prone to carpal tunnel trouble, the new mouse is well worth a look. Or a handshake. Or a handshake followed by a flop of the hand halfway to the left.