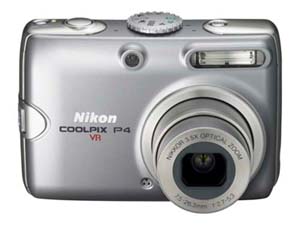 A digital camera make a lot of sense for small businesses; you can take employee ID pictures, add photos to brochures or Web sites, document insurance claims or create a visual inventory. But not everyone can snap photos like Annie Liebowvitz, so we appreciate anything that helps us take better photos &#151 especially when it comes to shooting in less-than-ideal lighting. That’s where image stabilization (IS) comes in handy.

IS uses innovative technology, originally developed for camcorders, to eliminate blurring when you shoot at slow shutter speeds. It means you can capture useable images in lower light than you could otherwise.

If you need to shoot pictures of equipment in the field, products at a trade show, accident scenes, indoor shots for newsletters &#151 or subjects in any number of other situations where lighting may be less than ideal and you don’t want to use flash &#151 IS can save the day.

Blurring occurs because the movement of your hands changes the framing of the picture during the time the lens is open letting in light. So the longer the lens is open &#151 the slower the shutter speed &#151 the more likely you’ll get blurring.

The other variable that determines how much light gets to the sensor to make the exposure is the size of the lens opening. Photographers talk about the amount of light you let into the camera, either by adjusting the lens aperture or shutter speed, in terms of “stops” &#151 one stop being a doubling or halving.

In shutter speeds, there is one stop, for example, between 1/100th of a second and 1/50th of a second, or between 1/2 and 1/4. When the light is low, and you’ve already opened the lens as wide as it will go &#151 to the smallest numbered f stop, e.g., f2.8 &#151 the only way to get enough light is to prolong the exposure by using a slower shutter speed. That’s when blurring typically occurs.

Note that if you use the camera in fully automatic mode, you don’t have direct control of these variables, but the principles still apply.

IS solves the problem by using gyro sensors that detect the movement and the direction of movement of the camera in your hands, and electro-mechanical devices that move either the lens elements or the image sensor in the opposite direction to compensate. IS keeps the scene you’re shooting in the same position in relation to the image sensor throughout the exposure.

The Optio A10 from Pentax, which sells for as little as $275 online, and the Coolpix P4 from Nikon, which you can get for as little as $330, both combine IS features with 8-megapixel (MP) sensors and better-than-average lenses. If you’re looking to upgrade the company digicam, both models are worth considering, though both have limitations.

Nikon and other vendors are claiming their IS cameras let you capture blur-free shots with shutter speeds three stops slower than would normally be possible. That’s significant. In many indoor situations it will mean the difference between being able to get a useable shot and resorting to flash which creates harsh shadows and artificial colors.

Nikon Coolpix P4
The Coolpix P4, launched earlier this year, has an 8MP sensor and 3.5X zoom lens (equivalent to 36-126mm in a 35mm camera). Maximum apertures range from f2.7 at full wide angle to f5.3 at full telephoto.

We found the controls convenient, but slightly counter-intuitive. You use the mode dial on the top surface, for example, to select things like white balance, ISO (light sensitivity) and image-quality settings that are usually adjusted from menus or a switch on the rear surface. No big deal, it just takes a little getting used to.

This camera is slightly chunkier than the Optio A10, but still of a size to fit conveniently in purse or jacket pocket. It measures 3.6 x 2.4 x 1.2 inches and weighs 5.6 oz.

The P4 uses the Nikon Vibration Reduction (VR) technology developed for the company’s high-end single lens reflex (SLR) telephoto and zoom lenses. On the P4 you can turn VR to off, normal or active by using the button on the camera’s top surface.

The normal setting reduces camera shake in typical low-light situations or when panning to capture a moving subject. The active setting is for the more severe camera shake you might experience shooting from a moving car.

We snapped the same subjects by weak window light with and without normal VR. The differences were very obvious. The VR shots were not quite as crisp as if we had shot in bright sunlight, but were sharp enough to print at up to 8×10. The shots without VR were unusably blurry.

We also saw improvement with normal VR when panning to capture a moving subject, though not as pronounced. Shooting from a moving vehicle with active VR also made a marked difference, though if you hit a bump just as you click the shutter, even with VR, the picture will still be blurred if you’re using a slow shutter speed.

Pictures taken in normal lighting with VR turned off were mostly impressive: sharp, well-exposed with realistic-looking color. The autofocus system sometimes seemed slow to focus in low light but not so slow as to make a huge difference in most situations.

Pentax Optio A10
The Optio A10 is a very simple, automatic camera with an 8MP sensor and 3X optical zoom lens &#151 equivalent to 38-114mm in a 35mm, maximum apertures from f2.8 to 5.4. It doesn’t let you adjust shutter speed or aperture directly, but you can use exposure compensation controls if the autoexposure system consistently under- or over-exposes a subject.

It also has two autofocus modes (multiple and spot) and three autoexposure modes (multi-segment, center-weighted and spot). If you use them properly, you can get good focus and exposure in virtually any shooting situation, even without manual controls.

Like most cameras designed for consumers, the A10 also offers programmed scene modes such as landscape, flower, portrait, candlelight and food that automatically adjust the camera for special subjects and lighting.

If you press the SR button on the A10’s top surface you get a preview of the SR effect. Before you press the button, you can see the scene jiggling and shifting on the LCD as your hands move. After you press it, the scene appears rock solid.

Pentax makes no claims about how many stops slower you can shoot with SR turned on, but in our tests it performed about as well as VR in the Coolpix P4.

In one series of tests, we shot at more than three stops slower than you normally could &#151 at 1/8th of a second. Normally it’s impossible to hold a camera steady at that speed. The blurring in the shot without SR was so bad you could see ghost images. The shot with SR is not quite as crisp as the normal VR images from the P4, but still very useable.

In good lighting, the A10 takes great pictures &#151 sharp, properly exposed in typical lighting situations, with little discernible electronic noise and very realistic color. Given the number of pixels, pictures should look good even in print enlargements bigger than 8×10.

Bottom Line
Which camera should you choose? The Nikon camera gives you a little more manual control and a slightly greater zoom range. The Optio A10 is a little cheaper and slightly more portable, but it doesn’t allow you quite as much manual control. We say it’s a toss-up. You can’t go far wrong with either camera.

Based in London, Canada, Gerry Blackwell
has been writing about information technology and telecommunications for a variety of print
and online publications since the 1980s. Just for fun, he also authors features and columns
on digital photography for Here’s How, a spiffy Canadian consumer technology magazine.