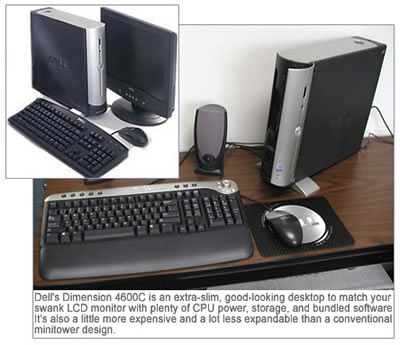 If it were named the Dimension 4600S, it’d be easier to guess what the initial stood for: slimline, small, or space-saving. But the two-fifths-scale sibling of Dell’s mainstream Dimension 4600 minitower is called the 4600C, so we’re not sure: compact, or maybe cute, or a bit more costlythan the standard model.

The Dimension 4600 is Dell’s all-purpose Pentium 4 desktop, combining your choice of 533MHz- or 800MHz-bus processor with Intel’s 865PE chipset instead of the fractionally faster 875P found in the Dimension 8300 and XPS models; its conventional case and chassis accommodate two optical drives plus a floppy and one accelerated graphics port (AGP) plus three peripheral component interconnect (PCI) cards.

But if you want to save desk space, or make a fashion statement alongside a skinny liquid crystal display (LCD) monitor, the Dimension 4600C is the pizza-box or coffee-table-book version — the same computing power, all the way up to Intel’s 3.2GHz Hyper-Threading central processing unit (CPU) if you like, in a 12.7 by 14 by 3.8-inch Mini Cooper to other desktops’ Camry.

The system’s front door opens to reveal just one 5.25-inch and one 3.5-inch bay, with the latter reserved for an optional PC Card module instead of a floppy drive. And the low-profile case has room for just one half-height PCI card and an optional, half-height AGP alternative to the Intel 865G chipset’s integrated graphics — there’s neither provision nor physical space (nor power, with a 160- instead of 250-watt power supply) for ample expansion.

But if you allow for its tradeoffs or sacrifices for style, the 4600C is a not merely capable but downright high-performance PC — although we think its configuration/cost sweet spot is probably south of the 3.0GHz model we tested. The latter, loaded with everything from a 120GB hard disk to Microsoft Office XP Small Business Edition but no monitor, rings up at $1,759 (given Dell’s daily juggling of free-drive-upgrade and mail-in-rebate deals, your mileage may vary). It’d be easy to trim $210 by skipping the Office XP and Paint Shop Pro preinstalls, or $270 by settling for a mere 2.6GHz of Hyper-Threading Pentium 4 horsepower.

You could also save about $120 by ordering a comparable configuration in normal-sized Dimension 4600 guise, but then you’d have twice as much bulk on your desk. The 4600C isn’t for everybody, but it fills a nice niche — literally.

Hey, Shared-Memory Graphics Aren’t So Bad with 400MHz Memory
This is our first test of a system with 865G (what Intel calls “Extreme Graphics 2”) integrated video, and it’s a landmark for the Labs, Weather, & Sports Desk: the first time — apart from strictly-word-processing business clients — that we’d suggest sticking with a desktop’s integrated graphics instead of automatically ordering the AGP-slot upgrade.

One reason is that Dell’s $70 Nvidia GeForce4 MX 420 adapter — the only alternative on the company’s Web site; the full-size AGP cards available for the regular Dimension 4600 won’t fit — is stuck at the same DirectX 7 level as the built-in 865G graphics. It roughly doubles the 865G’s score in Quake III Arena or Unreal Tournament 2003 benchmarks, but neither choice will run the latest DirectX 8 or tomorrow’s DirectX 9 games (or three of the four game simulations in FutureMark‘s 3DMark03). Note, too, that the GeForce4 MX card has only DVI and TV-out ports; our system didn’t come with the DVI-to-VGA adapter or dongle required to connect an analog monitor.

The other reason is that Intel’s 865G is noticeably quicker than its snail-paced 845G predecessor, especially when teamed with the 3.0GHz, 800MHz-bus Pentium 4 and 512MB of DDR400 memory. With the Nvidia card removed, the Dell posted a respectable 48 frames per second in Quake III Arena in High-Quality 1,024 by 768 mode, with a 3DMark 2001 SE Pro score of 2,893. Hardcore gamers will scoff, but The Sims players or digital-camera image editors, let alone office workers, should be satisfied with the onboard graphics

Do You Want Slots With That?
For the record, we did our formal benchmark testing with the GeForce4 MX card installed (the way Dell shipped the system), which boosted the 3DMark 2001 score from the abovementioned 2,893 to an even healthier 4,994.

It also yielded an 8-percent improvement in the BAPcoSysMark 2002 application benchmark suite, providing a solid overall score of 290 (409 in Internet content creation, 206 in office productivity) — about 10 percent below a couple of big-tower-cased desktops we’ve tested with the same Pentium 4/3.0C processor but with twice as much memory, huge hard disk arrays, and super-screamer ATI Radeon 9800 Pro graphics cards. The Dimension 4600C racked up PCMark 2002 scores of 7,298 (CPU), 7,450 (memory), and 880 (hard disk).

Besides the half-height Nvidia card, another $70 option on our test system was a multimedia gadget that fills both the sole PCI slot and the front-accessible niche below the optical drive, providing a 56Kbps data/fax modem and one IEEE 1394 FireWire port at the rear and a second FireWire port plus two notebook-style (16-bit Type II) PC Card slots in front.

The IEEE 1394 ports are handy for connecting a digital-video camcorder or fast external storage device; since the Dimension already has modem and Ethernet connectors, Dell promotes the PC Card slots primarily as accommodating optional flash-memory-card adapters for quick import of digital-camera stills. If you can live without FireWire, the 4600C has two universal serial bus (USB) 2.0 ports next to a headphone jack at the bottom front — also behind the hinged door, which we found ourselves leaving unattractively open most of the time — and six more USB 2.0 ports at the rear.

No Screwdriver Required
A thumbscrew lets you attach and detach the plastic stand that steadies the 4600C for vertical (on edge) placement, and pressing buttons on top and button unlatches the case so it can, like Dell’s larger desktops, be opened up like a suitcase — for this model, we should say, a briefcase, revealing painstakingly folded cables and not-a-millimeter-wasted arrangement of components.

There’s easy access to the two memory sockets (each holding a 256MB Samsung PC3200 DIMM in our test unit) and the low-headroom AGP and PCI slots squeezed beside the power supply, but amateur mechanics won’t want to mess with the Samsung SN-324B 24/10/24X CD-RW/8X DVD combo drive and PC Card/FireWire drive jammed between the case lid and the 120GB Seagate Barracuda ATA V 7,200-rpm hard disk.

There’s no room for a second internal hard disk, though the Dimension can be ordered with up to a 200GB drive, nor for a second optical drive, though you can replace the DVD-ROM/CD-RW combo with a DVD+RW drive if you like. The humblest of Dell’s speaker offerings, two Altec Lansing ADA-215 satellites, provided perfectly adequate audio for DVD-watching.

We’ve confessed our fondness for Dell’s Enhanced Multimedia Keyboard before — it’s a PS/2-interface board with handy Web-browser control and e-mail, Calculator, and My Computer launch buttons along the top and a cool backlit set of CD/DVD play buttons circling an audio volume knob (with mute button) at the top right. Our test keyboard felt a little stiffer than the sample provided with the Dimension XPS system we tested last month, but Dell’s Logitech-made USB optical mouse was as smooth and precise as ever.

We like the Dimension 4600C, in sort of a home-office version of the corporate small-form-factor client system way: It’s a stylish space-saver that’s far from an underpowered, sealed box, though as we said we’d probably try to offset its $100-plus price premium by opting for a slightly slower CPU and sticking with the handy DVD/CD-RW combo, instead of trying to make it the DVD-burning, game-blazing multimedia desktop that would really call for a more conventional chassis with more expansion room. If hi-fi companies can make bookshelf speakers, why shouldn’t Dell make a bookshelf PC?