An Entertaining PC for the Home Office 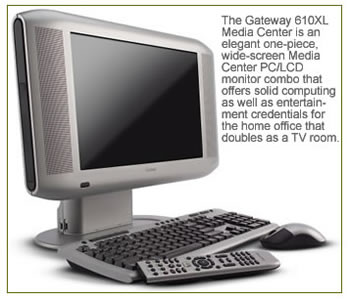 As we took the Gateway 610XL Media Center out of the box, we were already mentally drafting this review: A well-equipped Windows XP Media Center 2004 desktop with stylish all-in-one design for $2,000 … You could get a comparable, conventional HP Media Center PC and separate 17-inch LCD monitor for $250 less, and you’d be able to expand the memory or swap in a faster graphics card, but you’d have more pieces to set up and a plain instead of DVD-friendly, wide-aspect-ratio display … Speedy 3.0GHz processor … Nice screen but just brightness and tilt adjustments, can’t adjust contrast or height. That was as far as we got before the crowds rushed in.


The last desktop to draw this many ogling coworkers to the Labs, Weather, & Sports Desk was two years ago when we looked at the Sony Vaio W — another wide-screened, all-in-one home entertainment center, from the only other company that’s doing as much as Gateway to promote home-electronics convergence or turn the old “living-room PC” chestnut into a truly tempting coffee-table, kitchen, or bedroom PC. (Technically, credit for the 610XL goes to Gateway’s supplier, Taiwan’s FIC, which calls it the MyRoom PC — Ed.)


It’s not hard to see why we’re typing this between conversations with colleagues (“Ooh, how much?” “Two grand.” “Ooh, do you get to keep it?” “No.”), or why it’s not quite fair to grumble that the Gateway costs more than regular Media Center PCs. The 610XL is a compact desktop — it takes 21 by 10 inches of desk space, stands 16 inches high, and has a carrying handle to help move its 30 pounds — that serves as not only a PC with Pentium 4/3.0 processor, 200GB hard disk, DVD burner, and three-piece speaker system, but as a 17-inch wide-screen LCD TV with remote control, TiVo or other personal video recorder, and DVD and audio CD player.


How many cords and cables does it take to set up all this equipment? Four cables plug into the back of the Gateway: the power cord, your TV cable, an FM antenna, and your Internet connection. Scratch the last if you have a wireless router, since an 802.11g wireless network adapter is built in.


Gateway even addresses one of our gripes about Win XP Media Center Edition 2004, bundling Sonic’s PrimeTime software so you can burn TV shows recorded with Media Center to DVDs and Video CDs playable in other PCs and DVD decks, instead of being limited to viewing them on the Media Center PC. The 610XL has a few flaws, but it’s an alluring mix of a full-featured computer and sleek entertainment center.

Our diagnostic utilities see the 610XL as a desktop with two PCI slots (define) — occupied by the Broadcom 802.11g adapter (define) and AverMedia TV tuner, respectively — and one AGP slot (define), occupied by a 128MB ATI Radeon 9200 graphics card, as well as 512MB of DDR333 memory (define) — 256MB modules in each of two DIMM sockets (define). Realistically, however, it’s a sealed box — even more so than your average notebook PC — affixed to the back of an LCD monitor. The Radeon 9200 is the only graphics controller the system will ever have, and there’s no way to expand the standard memory. Worse, we couldn’t even find an option to configure the system with 1GB instead of 512MB of memory on Gateway’s purchase page.


To be fair, the Radeon 9200 is a much better performer than many low-end 3D cards or integrated graphics chipsets, though not a match for the latest DirectX 9 game-maniac boards. For instance, the 610XL completed three of four game simulations while posting an honorable score of 1,218 in FutureMark’s 3DMark03 (and got 7,493 in the older 3DMark 2001 SE).


It limped through the Codecreatures and AquaMark3 benchmarks at just over 12 frames per second, but hustled through an Unreal Tournament 2003 flyby and Wolfenstein Enemy Territory test at a perfectly playable 76 and 46 fps, respectively — and, if you’re into grade inflation, played good old Quake III Arena at 145 fps in High Quality 1,024 by 768 mode.

The 610XL has a 160-watt power supply, which we’d consider a bit thin for a conventional desktop with empty slots and drive bays but which should be fine for this entertainment appliance. We had no complaints with the big 200GB (7,200 rpm) Western Digital Caviar hard disk and HL-DT-ST 4X DVD+RW drive.


Setup is simple. Besides the abovementioned few cords to plug in, the cordless keyboard, optical mouse, and Media Center remote control take two AA batteries apiece (included); if your TV cable comes out of a set-top box, you’ll need to run a supplied wire between the latter and the computer in order to use the Gateway’s remote.


The mouse is a comfortable, smooth-gliding unit. The black-and-silver keyboard looks a little bland for such a stylish system, but offers a good typing feel and convenient volume/mute, channel, and CD/DVD control buttons as well as launch buttons for e-mail, Web browsing, and Media Center Edition’s TV, music, photos, and home-videos functions.


There are also volume, channel, and brightness up/down buttons on the top edge of the display, alongside the power button. (Distressingly, we found ourselves holding down the latter several times when our test unit hung up when entering standby or sleep mode.)


As mentioned, the contrast, image size and centering, and other controls you’re used to from desktop monitors — though don’t expect in notebook displays — are absent. Nor does the 610XL truly shine as a TV set; it’s not HDTV-ready, and neither it nor any other PC/TV tuner we’ve seen quite matches the quality of a regular TV for watching sports, sitcoms, or soaps.


But the 17-inch, 1,280 by 768-pixel panel is crisp and bright for regular Windows work and downright dazzling for DVD movie-viewing, helped by way-above-average sound from the stereo speakers on either side and the subwoofer hung on the back — you can crank up the volume without slipping into staticky, tinny buzz.

The subwoofer’s not the only thing on the back, of course; the 610XL has multimedia ports galore if you want to hook up additional speakers or video inputs. You’ll find front, rear, and center audio line-out jacks; left and right audio line-in; S/PDIF digital audio out; S-Video in and out; and 56Kbps modem in addition to the previously mentioned Ethernet and coax cable connectors. The manual mentions a switch that lets you toggle between an external and built-in FM antenna, but we saw no such switch, and radio reception without the supplied, lengthy wire plugged in was lousy.


There are five USB 2.0 ports (define), four at the rear and one on the left side of the stand next to an IEEE 1394 FireWire port (define). Microphone and headphone jacks are on the right. A door on the left edge of the display reveals Memory Stick, Secure Digital/MultiMedia Card, CompactFlash/Microdrive, and Smart Media card slots for getting your digital-camera shots into Media Center Edition’s slide shows, as well as a button used to sync the wireless keyboard and mouse.


Unless you’re a hardcore gamer, the 610XL Media Center is hard to knock. Granted, it’s more costly than conventional desktop designs — actually, more like a notebook in terms of finite (zero is finite, right?) expandability. But it’s the handsomest Media Center PC we’ve seen so far. With a drawer nearby to stash the keyboard and mouse, it’d make a beautiful bedroom or dorm-room solution. Just ask any of our coworkers.