A Laptop Made for the Desktop 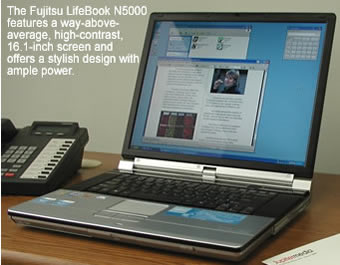 For a couple of years, vendors have been referring to full-featured notebook PCs as a “desktop replacements,” but in the case of Fujitsu Computer Systems’ LifeBook N5000 that isn’t strictly accurate. The flagship of the LifeBook line should properly be called a “desktop and monitor replacement,” because it packs not only considerable computing power — with Intel’s 3.2GHz Pentium 4, a gigabyte of memory, and a DVD burner — but one of the biggest and brightest screens in the laptop market.


Fujitsu calls the 16.1-inch LCD a CrystalView display and boasts that its 600:1 contrast ratio and 350 nits of brightness offer CRT-caliber color and clarity. Like the XBrite LCDs of Sony’s Vaio K and TR series, the Fujitsu screen appears glossy black rather than matte gray when turned off, with a glare-fighting finish and no bad pixels we could see (although a bad photographer placed the screen at an angle to a sunny window in the shot below — Ed.)


Rather than the wide aspect ratio increasingly popular for watching DVD movies or putting two program windows side by side, the CrystalView sticks to the conventional 4:3 ratio, but at handsomely high resolution — 1,400 by 1,050 pixels, fine enough for plenty of detail yet large enough so toolbar icons, menu text, and other screen items aren’t invisibly tiny. Colors are sharp and brightness is ample (as long as you stick to the top two or three of the eight brightness settings), making the N5000’s the best notebook screen we’ve seen this year.


The Fujitsu is part of the vanishing breed of full-sized, three-spindle portables, with a 1.44MB floppy drive (located on the right side, next to a pair of PC Card slots) as well as internal optical and hard drives. The DVD-RW (define) is on the front edge, where it takes a bit of fiddling to find the eject button and push back the system for adequate tray-loading room if you’ve actually got the laptop on your lap — in which case you’ll also notice its bottom-mounted feet digging into your knees, to say nothing of its 9.9-pound weight.


All are good reasons to restrict this 11.9 by 14.0 by 1.8-inch giant to a desk or conference table, instead of cramming the LifeBook and its jumbo 1.8-pound AC adapter into a briefcase. Another is that, while its black-and-silver finish makes the Fujitsu one of the best-looking laptops we’ve tested lately, its smooth black case seems sadly scuff-prone.


More seriously, while Fujitsu’s decision to place the stereo speakers artistically on either side of the keyboard adds to the N5000’s consumer-electronics allure, it cramps the keyboard layout: Not only does the LifeBook lack the desktop-style, separate numeric keypad found on some widebody models in this price range, it lacks dedicated Home and End keys. Instead, the designers settled for double-duty PgUp and PgDn keys (on either side of the up arrow) toggled with the Fn key.


The speakers sound pretty good — though we sometimes had to turn up the volume to drown out the hot breeze of the cooling fan at the system’s left side — but we’re disappointed to find a compromised keyboard on a desktop replacement. Six small cursor-control keys instead of a full array of eight is something we’d expect to see on a slimline notebook half the N5000’s size.

Another aspect of the LifeBook’s black-and-silver style is the audio volume control: a flush-mounted dial (or recessed knob?) above the keyboard, accompanied by a string of eight LEDs that light or dim as you twirl the dial to the loudness you like. A stiff sliding switch at the left edge turns wireless networking on and off. Noticeably absent: Any browser- or program-launch or CD/DVD play/pause/navigation keys, as found on many multimedia portables nowadays.


And though we dislike the cursor-control keys (and diminutive Delete key, mounted one place in from the top right corner where we intuitively reach for it), the keyboard does offer a smooth, comfortable typing feel. The touchpad is first-class, with two large buttons flanking a rocker-switch replacement for a mouse’s scroll wheel.


There’s a Memory Stick/SD card slot at the right edge of the keyboard, along with four USB 2.0 ports (define) — two at the left, two at the back — and one IEEE 1394 port (define). Microphone and headphone jacks are at the left, with modem, Ethernet (define), VGA (define), and S-Video (define) ports at the rear.


If you need any more evidence that the LifeBook N5000 is built for mostly plugged-in desktop rather than footloose mobile use, its lithium-ion battery proved disappointingly short-lived in our tests: Even relatively undemanding word-processing work sessions lasted barely 1 hour and 40 minutes, with more disk- and multimedia-intensive usage cutting unplugged life to less than an hour and a half.


Overall, your opinion of the LifeBook N5000 will depend on how much value you assign to its gorgeous, plus-sized screen — it really is as close to a 17-, maybe even 19-inch, CRT as you’ll find in a notebook PC, and helps to outweigh shortcomings that are common to most heavyweight laptops (such as, well, heavy weight). Our keyboard and battery-life gripes are probably enough to knock the $2,599 Pentium 4/3.2 test unit off our shopping list, but the $2,099 Pentium 4/3.0 configuration is a tempting desktop alternative.