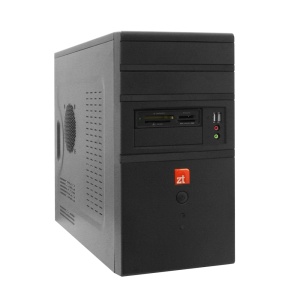 One reason among several to consider ZT Systems’ line of Reliant desktop PCs, including the $550 B401Xa 9100e model we reviewed here, is that they ship with either Windows Vista or XP Professional.

Vista is far from the total disaster Microsoft bashers would have you believe, but now ‑‑ in the midst of economic turmoil ‑‑ is not the time to undertake a potentially expensive migration to a new operating system, or to assume the added cost of supporting two operating systems.

Many PC brands, however, ship only Vista or charge you extra to “downgrade” to XP. So what do you do if your business runs XP and you need a new PC to replace one that broke or to equip a new employee? ZT Reliant is one good answer.

ZT also offers an above-average warranty and support package on the Reliant products, another reason they’re a safe bet in turbulent times.

Desktop PCs are such a commodity item, and Dell, HP and Acer already have such huge mindshare in the market that it’s tough for other brands to break through.  Too bad. ZT deserves a shot.

Not that it’s exactly a new kid on the block. The Secaucus, New Jersey company has been around for 13 years and claims to have shipped more than a million systems. But the name may be new to many readers.

The Reliant models are designed for small business. We love the name. It sounds – quite deliberately, we’re sure – like a K car, Chrysler’s iconic and supposedly very reliable mid-size family sedan of the 1980s.

But despite the K car associations and the price, which puts the B401Xa 9100e in the middle of the Reliant range – the least expensive models sell for less than $450 – this is actually a pretty hot machine, suitable even for low-end power users.

It uses a Phenom X4 Quad-Core Processor Q9150 chip from Advanced Micro Devices (AMD) with a clock speed of 1.8 GHz per core. Quad-core means the processor chip, in effect, has four central processing units that can work together or separately. And the system comes with a 4MB L2 cache, 4GB of DDR2 SDRAM and a 500GB (7,200RPM) hard drive.

When using programs designed to work with multi-core processors, a 1.8 GHz quad core processor may be able to complete tasks as quickly as a conventional single-core processor with a clock speed of 7 GHz (not that such processors exist in the PC world – the industry has moved entirely to multi-core.)

The flip side is that programs not designed to work with multi-core processors may work very little or no faster than a single-core processor with the same speed.

But multi-core processors also speed work on computers when multiple programs are running and performing tasks – because each task can be handled by a different core and not have to share resources.

We weren’t able to do scientific stress testing of the B401Xa, but in every-day computing situations – several programs running, including resource hogs like Adobe Photo Shop – it performed better than adequately.

Companies with an Intel-only policy can choose Pentium or Core-Duo versions of most Reliant models, but may pay slightly more for similar performance. (And for what? AMD processors are routinely rated as equal to or better than Intel equivalents.)

ZT may not always use the absolute best-performing or highest-rated technology in its Reliant computers, but it doesn’t use no-name junk either. Other key components in this configuration come from major vendors with good pedigrees.

The integrated Radeon HD 3100 graphics system, for example, is from ATI, a market co-leader (AMD acquired ATI two years ago.) The keyboard and optical mouse, both wired, are from Logitech (though branded ZT). The ALC888 8-channel audio system is from Realtek Semiconductor Corp. which supplies many other PC makers, including Dell.

The case is a low-rise tower, which means it’s probably too big to perch on a desk but can stand on the floor or on an under-desk shelf.

The Reliant B401Xa offers reasonable room for expansion given that it’s not a full tower: six USB ports (two at the front and four at the back) and four available expansion slots inside (one PCI-E 16x, one PCI-E 1x and two PCI 2.2 32-bit PCI bus slots.)

Our out-of-the-box experience was entirely without surprises. Not that you would expect many. Desktop PCs are no longer rocket science and the Windows XP operating system is the most reliable available (leaving aside, arguably, the Mac OS).

We were up and running and on our network – the B401Xa has a Gigabit Ethernet card – inside 15 minutes of opening the box.

Besides better than average performance and solid components, there are a couple of other reasons to consider ZT, and this product in particular, especially in the current economic climate.

For one thing, all the Reliant products come with a five-year warranty that covers parts and labor – or replacement, at ZT’s discretion – if the computer fails under “appropriate use.” (You’re not covered if you let someone else try and repair it or if damage is from accident, misuse, abuse, negligence, improper shipping or acts of God.)

Even better, you get free 24/7 phone support – at a toll-free number, no less – for the life of the product. And unlike some PC makers, ZT both assembles and supports its products in the U.S.

This means more employment here and more profits stay here. Does it mean better support? Not necessarily. Still, your chances of reaching a support representative with good skills in your language are probably slightly better than with some vendors.

One downside: no application software. Zero, zilch. But then, you probably have the software you need.

ZT’s SKU strategy is sometimes confusing. When we first took delivery of this model, it was only available from Costco. Three weeks later, even though it’s a fairly new product – AMD only introduced the processor in July – this configuration was no longer available at Costco.

However, an almost identical version with a slightly faster (2.3GHz) processor (for $600) is still available at Costco. And this configuration, with the 1.8GHz processor, will be available direct from ZT and from both Amazon and OfficeMax.

Buying a desktop PC isn’t the minefield it may once have been. They are, as noted, commodity items. By the same token, you don’t want to buy from just any one. The ZT Reliant computers offer better-than-average price-performance, reliable components and a reassuring warranty and technical support package. What’s not to like?