The Gold Standard in Ultra-Light Laptops 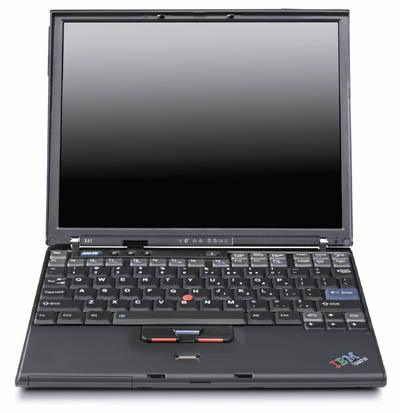 If you’re shopping for a very lightweight laptop to use for traveling, Lenovo‘s ThinkPad X41 &#151 not to be confused with the company’s X41 Tablet PC&#151 should be a strong candidate &#151 as long as money’s not an issue.

It weighs a mere 3.27 pounds, but features a 12.1-inch LCD screen, 1.50 GHz Intel Pentium M 758 low-voltage processor, 512MB of memory, a 40 GB hard drive and built-in Wi-Fi wireless networking. This type of configuration provides enough performance to get you through most work tasks, unless your business has you running data-intensive calculations or editing video. Prices (direct from Lenovo) start at $1,900. The model we tested sells for $2,300.

The barebones product does not include an optical (DVD or CD) drive, but you can add the optional ThinkPad X4 UltraBase docking station for $219. A CD/DVD burner to fit in the X4 UltraBase costs another $280. You could travel with the UltraBase as well, but it adds another 1.43 lbs. without the drive. With the drive, the total weight tips the scales at more than five pounds, well out of the ultra-light class.

If you need an optical drive when you’re traveling &#151 to watch movies on the plane, install programs from disc or to burn CDs &#151 you’d be better off buying a slightly bigger, heavier model with a built in optical drive. The slightly bulkier Dell Inspiron 700M, which has a 12.1-inch widescreen LCD, weighs 4.1-lbs., but includes a built-in CD burner/DVD player, a more powerful 2 GHz Pentium M processor and a bigger hard drive. And it sells for only $950.

It’s quite a price difference. So why would you pay so much more for the ThinkPad &#151 other than to get a slightly lighter load for traveling? Think legendary quality, topnotch after-sales support and renowned attention to detail. Is that enough? That’s between you and your wallet.

Features on Display
The X41 feature that most clearly differentiates it from most laptops is the integrated fingerprint reader, positioned just below the TrackPoint keys. You swipe your finger over the glass topped reader to identify yourself.

Preloaded software lets you “enroll” two or more fingerprints, which you can use in lieu of a username and password to log on to the computer and for other log-on procedures as well. The advantages are fairly obvious: quicker log ons, you don’t need to memorize a password, and nobody else can access your system.

The display screen is clearly a critical component in a laptop. This one is superior to most we’ve seen. The text is crisp and clear, and we were impressed by its readability even in full sunlight.

ThinkPad has always stood out from the pack when it comes to the keyboard layout and Windows pointer control device, and the X41 lives up to formerly-IBM’s-and-now-Lenovo’s reputation in that area.

The keyboard is one of the best we’ve tried on an ultra-light laptop, from the spacing, layout and feel of the keys, to the wedge shaped design of the lower half of the unit. It gets thinner at the front means the whole keyboard tilts for superior ergonomics.

Like most ThinkPads, the X41 features a TrackPoint pointing device, a little rubbery nubbin set above the B key between the G and H keys. You prod it with your index finger to move the cursor. When it was first introduced years ago, we thought it was the best mouse substitute going &#151 maybe even better than a mouse because it meant your fingers never had to leave the touch typing position. But with early (and even some fairly recent) models, the TrackPoint stuck up a little too far and got in the way when touch typing. The TrackPoint on the X41 eliminates this problem.

Its top surface is larger in diameter and rougher and therefore “stickier” than earlier versions. And it’s set lower in relation to the key tops. It’s still easy to reach and manipulate, but doesn’t get in the way of typing. You can also now configure it so that tapping on it performs the same action as clicking the left mouse key. The TrackPoint keys located below the keyboard also seem better situated than on older models we’ve tried, at least for our small, short-fingered hands. And the middle key, though not new with the X41, is an important innovation.

When you press and hold the middle key with your thumb and then push the TrackPoint up or down with your index finger, it scrolls the page up or down instead of moving the cursor. One big advantage modern mouses had over laptop pointing devices was the scroll wheel. The TrackPoint middle key eliminates that advantage. Of course, some recent mouses from Microsoft have scroll wheels that can also be pushed to the side to scroll left or right. The TrackPoint can’t do that, yet.

Quality in the Details
The X41’s “value proposition” tends to be an accumulation of such small things. The Wi-Fi wireless network access card, as another example, works in all three types of Wi-Fi (802.11) networks &#151 802.11a (relatively rare but used in many office WLANs) and 802.11g at 54 gigabits per second (Mbps) and 802.11b at 11 Mbps. This means you can use your laptop on the 11a network at the office, at full speed on your 11g network at home and also at Wi-Fi hotspots, which are usually 11b. The wireless interfaces in most laptops are 11b/g at best sometimes 11b only.

Some of the ThinkPad’s standard features are also impressive, such as the configurable Active Protection System &#151 part of every ThinkPad’s ThinkVantage software package &#151 which automatically turns the hard drive off when it detects shocks that could damage the drive if it’s operating. The software lets you set detection sensitivity and manually suspend Active Protection in some circumstances. The system will also learn the pattern of shocks consistent with riding in a car or train and ignore them.

The Connections network configuration utility lets you set up profiles for different places you use the computer &#151 in the office, boardroom, home office, living room, commuter train, car or Wi-Fi hotspot. You can easily switch between profiles and optionally turn off the Wi-Fi radio when you move to a profile that uses the wired Ethernet connection &#151 a good security precaution.

One nice, if minor, hardware feature that exemplifies IBM’s attention to detail is the ThinkLight, a tiny lamp for illuminating the keyboard in dim lighting. It’s mounted on the lid above the screen and can be turned on or off by holding down the Function key and tapping the PgUp (Page up) key.

Bottom Line
The ThinkPad X41 is an excellent product with a lot of nice features. We’re just not sure they warrant the substantial price premium over similarly configured, if less fully featured, competitors’ products.

Based in London, Canada, Gerry Blackwell has been writing about information technology and telecommunications for a variety of print and online publications since the 1980s. Just for fun, he also authors features and columns on digital photography for Here’s How, a spiffy new Canadian consumer technology magazine.