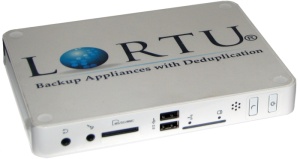 The Lortu Data Appliance (a.k.a., LDA-Mini) is basically a small business server for storage, albeit a tiny one; the device is only slightly larger than a standard hard drive. You can also use it to send a copy of your data over the Internet to a remote server for additional data security (this second aspect is known as replication).

Lortu, a company based in Spain, pioneered data deduplication (which gets rid of redundant data) as early as 2003. This article gives an overview of deduplication, a description of the device and a rundown of how the LDA-mini functions on a small network in the real world.

Data deduplication is regarded as an essential aspect of small business storage these days. Anyone performing daily and weekly data backups is potentially storing hundreds of copies of the same file. Here is why deduplication is so important:

One backup of all the files sitting on all the small business servers (or PCs in smaller operations) could well consist of multiple copies of the same files. Say, for example, the boss sends a large PowerPoint presentation to all employees. The resulting backup would make a copy of each of the presentations sitting on each system, and then transmit them to the backup tape or backup disk-based system.


The next day (or week), another backup transmits all those PowerPoint presentations again (even though each is identical) to the backup storage medium. And from then on, it’s lather, rinse, repeat. Eventually you end up with a tremendous amount of redundant data.

Let’s say organizational data only changes by 5 percent per week. Any backup would transmit 100 percent of the data to tape (or disk) each week. In other words, 95 percent is already backed up and sitting on some other backup tape or server. That’s why backups get so unmanageable. You end up with a mountain of tapes or a backup server that is filled to the brim with multiple copies of the same data.

Enter data deduplication technology. It retains a master file of stored data, making sure that it stores only one copy of any given file. After the first backup, subsequent backups are much shorter, as only new files or revised files get transmitted to the backup device.  The result is a lot less space consumed in the backup process.

If a company has 100 Gigabytes (GB) of data, under a normal backup to tape, ten weeks of backup would mean 1 Terabyte (TB) of data stored. In a year, that company would need at least 5 TBs of storage space for backups (in the real world it would be a lot more as new data is created and stored each week).

With deduplication, on the other hand, that original 100 GBs of data might only take up 70 GBs of space because multiple copies of the same data would be eliminated. Perhaps the organization adds 5 GB of new data a week. Ten weeks later, the backup appliance only contains 120 GBs of data.

After a year, it might swell to 320 GB. That’s roughly 15 times less data than during traditional backups. You would call that a deduplication ratio of 15 to 1. Lortu claims much higher deduplication ratios of 100 to 1. However, amounts vary from organization to organization based on the applications used and the type of computing environment.

In addition to deduplication, the LDA-Mini includes compression technology — if you are taking advantage of Lortu’s remote replication service for external storage. Compression essentially squashes (yeah, that’s a technical term) the data into a smaller space.

As an analogy,  consider what a document on a page looks like. It typically has a lot of white space — gaps between paragraphs, spaces between sections etc. Compression, in effect, eliminates these gaps so that more data can be stored in the same footprint — typically about twice as much.

Together, deduplication and compression significantly reduce the amount of storage capacity needed by any company, which in turn reduces costs.