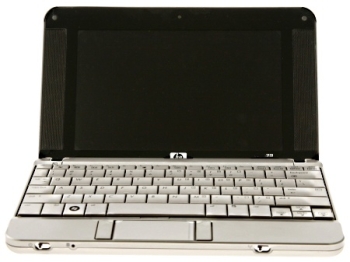 Talk to HP executives, and they’ll tell you that the HP 2133 Mini-Note PC introduced today targets the educational market. Ask about its place in the mainstream laptop segment, and they’ll tie you to a chair and tell you it’s meant for instructional use. Comment on its VIA processor or choice of operating systems, and they’ll wrestle you to the ground and tell you it’s designed with K-12 classrooms in mind.

They’re not fooling anybody.

While it does compete with Intel’s Classmate PC (and, to a much lesser extent, the $200 One Laptop Per Child notebook), the 2133 is unmistakably HP’s response to the two-pound, $400 Asus Eee that’s been winning over business travelers — and putting “Sold Out” signs in retail stores — since it debuted five months ago.

Like the Eee, the HP handles daily productivity tasks such as spreadsheeting, e-mailing, and Wi-Fi Web browsing instead of trying to be a multimedia or gaming machine; it relies on a humble, single-core processor and lacks a built-in optical drive; and it’s priced far below the thinnest and lightest notebooks from the likes of Sony, Lenovo, Toshiba, Dell, or Apple. The base model is $499, with our loaded, top-of-the-line test unit slated to cost $749.

If that’s a couple of hundred bucks above the various Eee models, it’s because the Mini-Note gives you more PC, beginning with a considerably more stylish and solid-feeling aluminum instead of plastic case. It surpasses the Eee’s 7-inch, 800 by 640-pixel screen with a glossy 8.9-inch display with 1,280 by 768 resolution and a scratch-resistant coating.

Asus’ forthcoming second-generation Eee will have a larger screen, too, but won’t come close to what HP boasts is a 92-percent-full-sized keyboard: The A-through-apostrophe keys on the 2133’s home row span a bit over seven and a half inches, versus our desktop’s eight inches and the Eee’s six and a half.

The Mini-Note’s Ctrl and Delete keys are in their proper bottom left and top right corners, respectively, instead of being relocated on some designer’s whim. And while the Insert, Delete, and function keys and the cursor arrows are half-sized, the alphanumeric keys seem as big as floor tiles at first glance, as well as styled to match the 2133’s aluminum case.

And Four To Go


At rollout, HP is offering the system in four configurations, with custom tailoring presumably available at the hpshopping.com Web site — we say presumably because HP says the 2133 will be available with Windows XP in place of Windows Vista, but none of the four introductory bundles have XP preinstalled.

The $499 model is the most Eee-like: It runs Novell Suse Linux instead of Windows and has a 4GB solid-state drive instead of a hard disk. Its modest 512MB of memory and 1.0GHz VIA C7-M processor ensure its entry-level status, although budget buyers enjoy the same spacious keyboard and screen as their deeper-pocketed peers.

For $749, the fourth and fanciest version offers a swifter 1.6GHz version of the VIA processor; Bluetooth as well as Wi-Fi; the system maximum 2GB of DDR-2 memory; Windows Vista Business; and a larger six-cell battery pack that, instead of fitting flush, props the HP’s rear an inch or so off your desk to form a fair typing angle.