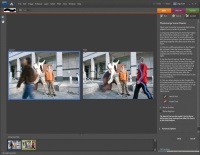 Most of the best new features are in the Fix module, and most of them take existing capabilities and make it easier and faster for people who aren’t graphics professional to exploit them.

The Guided Edit mode in Fix applies multiple actions with one click. So for example, “playing” an Automated Action called Faded Ink Vignette applies a series of changes to an image that make it look like an old faded color photo.

Also new is a section of Photographic Effects under Guided Edit that lets you do things such as create a line drawing from a photo in one click, or make your image look like an old-fashioned black and white photo or as if it were taken with high-saturation slide film. These effects were available before, Elements 7 just makes them easier to use.

One of the best new edit features quickly eliminates distracting elements in an image, automating and simplifying the process of “cloning” elements from one image to another. It can be truly magical – though we’re not sure how often it will work as well as it does with the sample images Adobe provided for reviewers.

Using the Clean Your Scene action in Guided Edit, you load both pictures into the edit space, with the image you want to use as the final uncluttered picture on the right. Use the pencil tool to mark the unwanted object in the final picture – you just have to draw a line through it – and it magically disappears.

Photoshop Elements 7 replaces the pixels of that object with pixels it takes from the source image on the left in which the background is unobstructed. With the Adobe sample pictures, no remnants of the unwanted pedestrian could be seen – the clone was seamless.

If you often shoot in crowded places – trade shows, for example – and use multi-shot mode so you get multiple images with virtually the same composition, you could use this feature to make a composite of the best elements from two of them.

A new surface-blur filter (a filter is a small program that makes changes to a selected part of an image) softens surfaces while retaining sharp edges. This may not sound terribly exciting, but it’s great for enhancing portraits. If you select faces in harshly lit shots, this filter will eliminate blemishes, wrinkles and other unwanted surface detail in an instant.

Photoshop Elements has always provided various ways of presenting pictures and Elements 7 introduces some nice enhancements. They’re mainly of interest to consumers, but could be useful in business too.

The new photo-book creator lets you import pictures from your catalog (in Organize), then select a visual theme and layout style from the included template library. When you click the Create button, Photoshop Elements automatically creates pages using your pictures and the selected theme and layout style and shows it on the screen in double-page spreads so you can see what it will look like.

At this point you can move pictures around in the book and add text and decorative art objects to pages before – Adobe hopes – ordering the book from its online service, which of course you can access from right inside the program.

You could create books about company events and give them to employees as morale boosters and team builders – the company picnic, the management retreat, the trade show, etc. Or shoot pictures when important customers come to visit and create books to give them.

Elements 7 is by no means an essential upgrade for existing Photoshop Elements customers, but it does offer attractive ease-of-use enhancements that help people get the most out of the program’s rich feature set. If you’re in the market for a new photo editor, the enhancements make Elements an even stronger contender than before.

How to Get Started with Green Computing