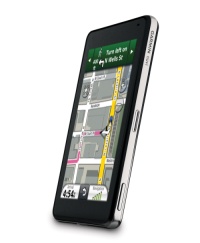 The Garmin Nuvi 3790T part of the new 3700 series of Garmin navigators, is as sleek and sexy as an iPhone. It features a bright touch screen, includes free traffic updates, and you can operate the device using voice commands.

We just wish the 3790T (list price: $450), was a bit less reluctant to acquire a satellite signal. But we’ll talk more about that later in the review.

Advantages of the Garmin Nuvi 3790T

There’s plenty to love about the 3790T. Here are our favorite features in no particular order.

Compact size. The 3790T is only .35 inches thick — that’s thinner than the iPhone 4 and about half as thick as some earlier Garmin models. The GPS is lightweight, too, weighing only four ounces.

Gorgeous touch screen. The touch screen is large, at 4.3 inches (measured diagonally) and extremely bright. Though there was some glare, we found the screen easy to read in direct sunlight — much easier, in fact, than earlier Garmin models we’ve tested.

Voice commands help you stay hands free. Unlike its siblings in the Nuvi 3700 series, the 3790T offers voice commands, to go home, look up an address and more. In our tests, this feature worked well. At times, however, we had to repeat a command or speak louder — but that usually occurred when we were driving in noisy city traffic.

Easier typing. In most cases, the 3790T did a great job of predicting what we were typing (such as city names) on its on-screen keyboard, making destination entry a lot more efficient than previous Garmin models we’ve tested.

Loaded with extras. The 3790T includes a lot of useful GPS features. My favorites include:

Disadvantages of the Nuvi 3790T

The Nuvi isn’t perfect, and we ran into several issues we wish Garmin would improve upon.

The worst experience occurred on a drizzly afternoon in Sonoma County, part of the Northern California wine country. The 3790T took about 25 minutes to find a satellite signal — so long, we wondered if the device had had a bit too much vino the night before and was sleeping it off.

After that incident, and upon the advice of Garmin’s tech support, we performed a full system restore on the GPS. Though we never had to wait as long for a signal again, the 3790T did keep us idling sometimes for three or four minutes — even on cloudless days — before it found a satellite. We found the slow signal search to occur more often when we had simply put the unit into sleep mode and reawakened it, as opposed to shutting it down entirely.

Free traffic alerts only when you use the included car mounting kit and power cable. The FM traffic receiver isn’t built into the GPS device, so you need to pack the relatively bulky car mount cradle and its power cable if you want traffic updates.

Battery life is fairly short. In our tests, with the screen brightness up to its highest level, the battery lasted just about two hours — not terribly long. The good news is the display is so easy to read in most conditions, you can often get by dimming the screen to 50 or 60 percent brightness to conserve battery power.

Directions are mostly, though not always, sensible. Every single portable GPS device we’ve tested, including the 3790T, has provided, at least a few times, head-scratching directions that made it seem as if we’d selected “circuitous” as a route preference. With the 3790T, we found that the “Shorter Distance” routing option usually gave us less convoluted directions than the “Faster Time” option.

The GPS Wrap Up

At $450, the 3790T might be beyond many small business budgets. But for frequent road warriors, the voice command feature alone is worth the extra money.

Also, the sluggishness to acquire a satellite signal at times is enough to give potential buyers pause. That said, every portable GPS device on the market, regardless of price, requires you to make one or more tradeoffs. It’s just the nature of this technology — actually, of any technology.

The question is, can you live with the tradeoffs? During our month of testing the 3790T, we learned to work around the sometimes-slow GPS signal search. For instance, we’d turn the device on as soon as we stepped outdoors, instead of waiting until we were inside the car.

If you’re frequently traveling to unfamiliar places for business, a portable GPS device will remove, or at least dramatically reduce, one potential source of stress — getting to your destination. And Garmin’s 3790T packs a lot of features into an appealingly slim design.

James A. Martin is the author of Traveler 2.0, a mobile technology blog, and has written about mobile computing since the mid 1990s.