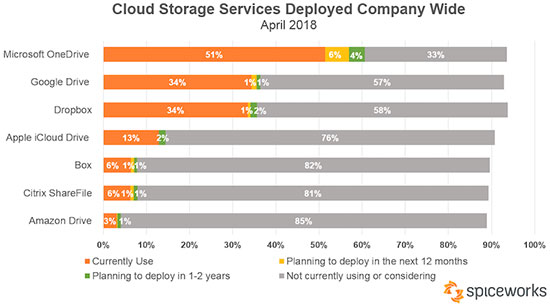 Cloud storage and file sharing services are being widely adopted by businesses, according to a recent survey from IT management specialist Spiceworks.

Eighty percent of the 544 businesses in North America and Europe recently surveyed by Spiceworks use cloud-based storage and file-sharing services. That compares to 53 percent of organizations just two short years ago in 2016.

Cloud storage services make it easy for small businesses to offer their users file sharing and collaboration without deploying a network-attached storage (NAS) device and configuring a virtual private network (VPN). Their surging popularity in recent years has practically turned brands like Dropbox and Google Drive into household names.

In the workplace, they have become indispensable tools for getting workers on the same page, completing projects, transferring knowledge and decluttering email inboxes. While they all offer similar functionality, there are some differences among them that are influencing purchasing decisions among business IT buyers.

The most popular cloud storage services deployed by businesses, regardless of size, is Microsoft OneDrive, with an overall adoption rate of 51 percent. Another 10 percent expect to deploy OneDrive within two years, Spiceworks found.

It would seem Dropbox should beat Google by those measures, but it falls slightly behind in Spiceworks’ rankings because more respondents have no plans to deploy it compared to Google Drive, 58 percent versus 57 percent.

Forty-seven percent of small businesses, organizations with 1 to 99 employees, use Microsoft’s offering. That figure jumps to 54 percent among midsized businesses with 100 to 999 employees.

“Dropbox and Google Drive are extremely popular file-sharing services, with each service boasting hundreds of millions of users. For sure, their success in the consumer market has bled over into the business market, but only to a certain degree,” Peter Tsai, Senior Technology Analyst at Spiceworks, told Small Business Computing.

Catering to consumers has helped those services attract SMB users, but as those companies grow larger, their priorities change.

“According to Spiceworks data, both Dropbox and Google Drive score high marks for ease of use and ease of set up, which are both appealing attributes for a product geared towards smaller businesses. However, large enterprises have a different set of requirements when selecting a cloud storage vendor,” Tsai noted.

There’s a reason Microsoft OneDrive wins the cloud storage crown. In short, it’s one of the business-friendliest among the bunch.

“Because they manage more users and data, larger organizations have additional needs when it comes to security, compliance, adequate user access controls and integration with existing applications — all areas where Microsoft OneDrive scored top marks in a Spiceworks survey,” Tsai added. “For example, OneDrive boasts tight integrations with other popular business applications and services such as Office 365, SharePoint and Microsoft Teams, not to mention Active Directory.”

Which is not to say that rival services are neglecting business users.

Recently, Dropbox Business added new AdminX tools that help businesses better manage their teams on the platform and provide the ability to disable downloads on shared links so that recipients can only preview a file on the Dropbox web application or mobile apps when the option is enabled. In February, Google Drive users gained a handful of new collaboration features, including the ability to comment on Office files, images and PDFs; mention colleagues; and assign tasks.

For more insights on the state of the cloud storage market, visit the Spiceworks survey.