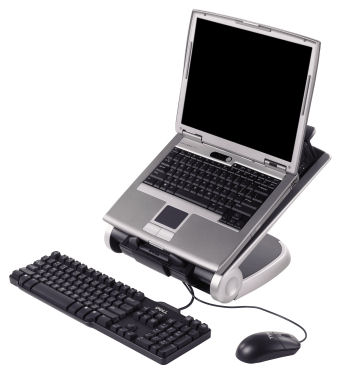 Small businesses looking for affordable notebooks to bring mobility to their workforce would do well to take a long look at Dell‘s new D510 Latitude. The company has put together a lightweight, reliable notebook that can meet the needs of most small businesses.

We used the D510 mainly for writing and for Web browsing, but also tried it out with DVDs and used the wireless connections. It performed well at every turn. Sometimes in small laptops, the keys are so small that it is uncomfortable to type. Not this one. The keyboard is responsive and not too cramped. We spend a lot of our time typing and found this notebook a pleasure to use.

Dell released the Latitude D510 during National Small Business Week last month. Priced starting at $929, the D510 is designed specifically for small- and medium-sized businesses with reliability, flexibility and performance in mind.

Light and Sturdy
The unit weighs in at 5.2 pounds, though that is in its slimmest configuration &#151 with a four-cell battery and the smaller 14.1-inch display. If you want a slightly bigger screen, an extra or larger battery and other add-ons, the machine becomes a little heavier. At five or so pounds, however, it’s the perfect weight. Our regular laptop weighs in at more than seven pound, and the two-pound gap makes a big difference.

Dell may well have found just the right middle ground between the clunky laptop with a decent screen/keyboard and those super-light notebooks that are almost impossible to type on. If you plan to check only a few Web sites and type a couple of e-mails while on the road, a PDA would probably be enough. But if you do a lot of typing, or answer a mailbag full of e-mail each day, the D510 is well worth looking at.

Built for the road, the Latitude is made of sturdy stuff. A tri-metal chassis (magnesium, aluminum and steel) is light yet tough enough to take minor bumps and bruises. It also has a sealed, stiffened keyboard to keep out dust and spills, and what Dell calls a Strike Zone shock absorber for the hard drive helps minimize disk failure.

It controls and absorbs the shock experienced by the hard drive when a system is bumped or dropped. According to Dell, this feature reduces head vibrations and aftershocks by an average of 34 percent over systems without this technology. Further, the Strike Zone feature works whether the system is on, suspended, in hibernate mode or turned off completely.

The Hardware Headliners
You can configure the D510 with an Intel Pentium M processor or a Celeron M processor. Our test version has the Pentium 1.6 GHz chip combined with the Intel 915GM chipset.

The computer’s a nimble performer capable of handling a wide range of tasks, from productivity applications to burning CDs, although SMBs with highly specialized data processing needs may require systems with more powerful processors.

Other features and options include:

For a smallish machine, the D510 comes with plenty of multimedia features and options. Ours included a combination DVD/CD-RW. Inside is an Intel Graphics Media Accelerator 900 for improved throughput and increased memory bandwidth. We watched a Star Wars movie during the trip to Denver, and the notebook handled it well, providing great visuals.

The Latitude incorporates Dell’s latest LCD display with power inverters that improve battery life while allowing a wider range of brightness settings. You can, for example, severely dim the D510 for late night air travel &#151 perfect if you want to work through the night while maximizing battery life. It also has dual-display capability &#151 i.e., you can use the laptop display and an external screen simultaneously. With Windows XP Professional, you can even display different images in different resolutions on each display.

Long Life
We confess to being cynical when it comes to notebook batteries. Time and again, we’ve been working on documents on a flight only to have the battery give out part way through. To make matters worse, the three hours and 20 minutes of power we were supposed to have turned out to be little more than two hours. When we thought we still had 20 minutes left, the machine insisted we shut down or lose everything.

When we saw the D510’s claim of five hour-plus battery life, we chalked it up to vendor hype. But the Lithium-Ion batteries, the power management features and hibernate mode helped it provide far longer operation than we expected. Perhaps it wasn’t five hours, but it was close. Further, when you want to charge, ExpressCharge gets it done in one hour &#151 no more leaving the laptop on all night to ensure you have enough juice for the next day. You can even install a second battery in one bay to double your uptime on the road.

Back at the Office
For many small business owners, the D510 could make you want to dispense with your office PC altogether. When away on business, you carry it with you. When you return, you plug the machine into a docking station at your desk. You have all your peripherals connected to the docking station and only have to make one connection to hook up to your printer and other assorted office gadgetry. Be warned, though, that the Latitude 510 is compatible with various Dell docking products but not all. In all likelihood, if you are moving from an older laptop, your old docking station will have to be replaced.

Our only real complaint about the model is a minor one &#151 it didn’t come loaded with Microsoft Office. So bear in mind that the laptop’s price doesn’t include office productivity software. You’ll either have to load your existing software, buy a license from Dell at time of purchase or else download the free office suite, OpenOffice.

Drew Robb is a Los Angeles-based freelancer specializing in technology and engineering.

Drew Robb
Previous articleMalware, Spyware and Other Ways to Ruin Your Day
Next articleA Lost PDA puts Your Data in Danger