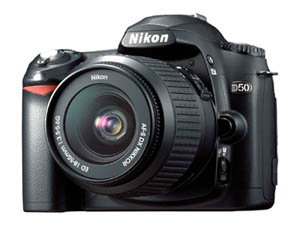 Point-and-shoot digital cameras have created a whole new do-it-yourself attitude in many small businesses. But low-end and mid-range consumer digicams are often limited in image quality and functionality. Small businesses that need to produce high-quality images — for catalogs, portfolios, Web sites, brochures and other applications — now have a better option: one of the new, relatively inexpensive digital single-lens reflex (D-SLR) cameras.


The new D-SLRs, designed mainly for photo enthusiasts but eminently suitable for small businesses too, share many of the same advanced features as professional cameras and produce superb images. One of the best we’ve seen is the recently introduced D50 from Nikon.


Achieving Film Quality
The D50, a 6 megapixel (MP) model, sells online for between $660 and $800 as a kit — a combination of camera body and lens (you can also buy SLR bodies and lenses separately). The D50 kit lens is an 18-to-55mm zoom, which is equivalent to 27-to-82.5 mm in a 35mm camera, or a moderate wide angle to moderate telephoto. The D50 is nearly as easy to use as any simple consumer camera, yet it produces high-resolution pictures that are virtually indistinguishable in quality from images taken with a 35mm film camera, even when printed in sizes up to 13×9 inches.


SLRs offer several key advantages over their point-and-shoot cousins— through-the-lens optical viewfinders, interchangeable lenses, bigger image sensors that produce clearer images, manual zoom control on most lenses and generally faster response times between shots. But the point-and-shoots have a couple of advantages too. They’re almost always smaller, and thus more portable and inconspicuous, and some feature LCD viewfinders that tilt and swivel, allowing you to see around corners and over obstructions.


Sharper Images Choosing the D50 over competing D-SLRs comes down ultimately to personal preference and business need. However, D50 is very slightly bigger and heavier than is its main rival, Canon’s hugely popular Digital Rebel XT, but it’s easier to hold and feels better balanced and more solidly built. Although the Rebel has a higher-resolution, 8 megapixel sensor, the D50’s sensor is bigger and, to our eyes, produces cleaner, clearer images.


An SLR’s through-the-lens optical viewfinder, a system of mirrors and/or prisms, lets you clearly see exactly what the camera sees. Many point-and-shoot cameras feature an optical viewfinder, but it’s often small and shows a slightly offset view, which can sometimes result in badly framed pictures, especially when shooting close-ups. The LCD on the back of most point-and-shoots does show you the view through the lens, but the image washes out in bright sunlight, making it difficult to see.


Adjustable Lenses
The advantage of interchangeable lenses may not be important to everyone, but it’s a great feature for some small businesses. The kit lens on the D50 may be perfectly adequate for most kinds of shooting, but if you need to do extreme close-ups of small items, you can remove the kit lens temporarily and replace it with an optional close-up (macro) or telephoto lens. Or if you need to shoot home interiors for a real estate Web site, you could install a lens that provides a wider angle of view than the kit lens.


Since most digital SLRs can use lenses made for 35mm SLRs, you have an enormous range of options, and you may even be able to reuse lenses from an existing 35mm SLR.

Digital SLRs have to be bigger to accommodate 35mm lenses, which means the image sensor — the electronic device that takes the place of film in a digital camera — is also bigger. This is a key advantage because, in general, the bigger the sensor in relation to the number of pixels, the clearer the images it produces. Cram too many pixels onto a tiny sensor, and they’re more apt to interfere with each other, creating electronic “noise,” which shows up in images as speckles and other image distortions.


Ready for that Closeup?
Most point-and-shoot cameras feature power zoom lenses. You press a button and a motor inside the camera zooms the lens in or out. This sounds fine, but in fact it can slow you down — both when taking pictures and at start-up. It’s also one more electrical/electronic system that can fail. With SLRs, you zoom the lens by turning a knurled ring on the lens barrel. It’s faster, quieter and more precise.


A camera’s response time — the time it takes to start up and recover between each shot and the lag between pressing the shutter button and actually taking the picture — can be important in a lot of shooting situations. If the camera doesn’t respond fast enough, you could miss the shot. SLRs are almost always faster than point-and-shoot models. When you flick the power switch on the D50, the camera is on and ready to shoot in a virtual instant. Some point-and-shoots take seconds to turn on completely.


Physical Features
The D50 is Nikon’s third digital SLR camera for photo enthusiasts. The first, the D70 was introduced last year to rave reviews, but it was too bulky and heavy for many buyers, especially when compared to Canon’s Digital Rebel, the first D-SLR kit priced under $1,200.


Significantly smaller and lighter than the D70 models at 5.2 x 4.0 x 3.0 inches and weighing in at 19 ounces, the D50 just feels right. The handgrip on the Rebel XT is too small to hold the camera comfortably, and the D50 has a more generous sized rubberized grip.


The D50 edges out Rebel even though the two cameras’ feature sets aren’t that different. The D50 has a slightly larger LCD screen on the back for reviewing shots and making menu settings, for example. And it offers spot metering, while the Rebel XT does not. Spot metering is useful when shooting high-contrast scenes that make it impossible to have everything in the shot correctly exposed. It lets you take a light reading from just one small part of the scene to ensure it’s properly exposed.


The D50 offers two slow-synch flash modes while the Rebel XT doesn’t offer any. Slow flash lets you take pictures after dark or in low light so that foreground subjects are adequately lit and in sharp focus, but ambient light sources in the background — stars, moon, city and street lights — are also visible and properly exposed. The D50 lets you choose between having the flash fire at the beginning of the long exposure required for this, or at the end of it, providing more creative control than most cameras.


The D50 also provides more flexibility in exposure compensation. This is a feature used in challenging shooting situations where the automatic exposure system can’t come up with a correct reading. Exposure compensation lets you adjust the amount of light entering the camera without actually changing the aperture or shutter speed settings. The D50 lets you adjust up to the equivalent of plus or minus five f-stops, while the Rebel XT only goes to plus or minus two f-stops.


The D50 is not perfect by any means. It’s disappointing that Nikon decided to switch to the SD (Secure Digital) format for memory cards, for example. SD cards are smaller than the Compact Flash (CF) cards used in most high-end digital cameras, including the Rebel XT, but fewer companies make them, so prices tend to be slightly higher for a given capacity and speed, and the highest capacity is smaller — currently 2GB versus 8GB for CF. And unlike the Rebel XT, the D50 doesn’t include a remote control, a useful accessory. On the other hand, it only costs $20.


Bottom Line:
The D50 is an excellent choice if you need to produce very high quality images on a fairly regular basis.


Based in London, Canada, Gerry Blackwell has been writing about information technology and telecommunications for a variety of print and online publications since the 1980s. Just for fun, he also authors features and columns on digital photography for Here’s How, a spiffy new Canadian consumer technology magazine.