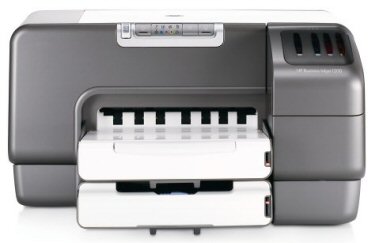 When you consider that color laser printer prices have slipped below $500 without losing that famously good plain paper output, why would any one choose an inkjet printer for the office? HP has an answer, or at least a plausible argument, in its Business Inkjet 1200.

The new printer is not only cheaper to buy &#151 starting at $199 with automatic double-sided printing and climbing to $349 for the top-of-the-line wired- and wireless-Ethernet-equipped test model that we tested &#151 but it’s also faster than some entry-level color lasers. Even more important, HP says, it’s cheaper to own. The company bills the Business Inkjet as its “most cost-effective color printer for general office use,” thanks to a replace-only-what-needs-replacing design that includes separate ink cartridges and print heads &#151 four apiece for black, cyan, magenta, and yellow.

Each replacement ink cartridge is rated for an estimated 1,750 pages and priced at $34 &#151 the same price as each print head, with the black unit rated for 16,000 and each of the three-color print heads for 24,000 pages. Some offices, HP predicts, will never need to replace a print head. Assuming yours will, we totaled up the cost for 48,000 pages &#151 a reasonable figure given the 1200’s rated duty cycle of 6,250 pages per month &#151 and got a bottom-line guesstimate of 8.2 cents per page, which certainly compares favorably to the 10 to 12 cents each that color pages from a low-end color laser will cost you (though the latter’s black-and-white output is much cheaper).

Naturally, that wouldn’t matter much if the Business Inkjet 1200 couldn’t compete on plain-paper print quality &#151 churning out letters, reports, and presentations on generic copier paper instead of requiring costly, coated inkjet paper. That’s going to be a judgment call, but we think the HP holds up pretty well, with vivid colors and sharp text as long as you’re willing to wait for its normal rather than draft-mode output.

Initials for Everyone
As mentioned, HP offers several 1200 models. The Business Inkjet 1200 ($199) includes a snap-on duplexer for automatic printing on both sides of a page, along with a low-profile input tray &#151 HP calls it a 150-sheet tray, although we’re tempted to call it a 125-sheet &#151 and both USB 2.0 and parallel ports.

A white top and paper tray make the 30-pound HP more handsome than your average all-beige or -black printer. Though not as big as the behemoth Business Inkjet 3000 series we tested in early 2003, it’s a bit bulky, measuring roughly 20 by 23 by 11 inches with the main paper tray’s output catch flap extended. HP says its power supply (a typical notebook-style external brick) draws a maximum of 75 watts.

New Cars Should Come with a Full Tank of Gas
Setup is straightforward. After pushing its latched top to pop open the ink cartridge cover, you insert the four PDA-sized, ovoid-cylinder-shaped cartridges, then close that cover and lift the main lid to install the print heads. All eight pieces fall into place with a gentle push. After waiting some seven minutes for the printer to complete initial warm up and print head alignment, you’re ready to insert the software CD, which prompts you at the proper time to connect your USB, parallel, or network cable.

However, HP earns a black mark for following the industry’s common path of contempt for its customers: While the 1200’s black, cyan, magenta, and yellow ink cartridges, as mentioned, are rated for 1,750 pages, the color cartridges supplied in the box are half-empty and the black cartridge less than 40 percent full, so you’ll be lucky to get 750 pages before being obliged to buy your first replacements.

This consumer-cheating, cost-cutting trick is virtually standard practice for both laser toner and inkjet cartridges shipped with new printers. And even though HP’s honest enough to admit it (in the very fine print of the Business Inkjet’s data sheet) that doesn’t change the fact that the practice stinks.

On the positive side, the HP PCL 3 driver and utility software offer all the job-finishing and quality tweaking options you could wish for, from booklet or poster printing through duplexing (either manual or automatic, though we can’t imagine why anyone would pick manual when automatic’s available) and watermarks, as well as pop-up alerts for empty paper trays or ink cartridges and open doors. You can also click for browser-based or push a button for printed status, history and consumable-life-expectancy pages.

Fast Enough To Satisfy
With a 32MB print buffer and rated speeds up to 28 pages-per-minute for black and white and 24 ppm for color, the Business Inkjet 1200 outruns low-priced, four-pass color lasers even after deducting for the usual advertised-inkjet-speeds exaggeration allowance

The driver offers a choice of four speed-versus-quality modes: both Draft and Fast Normal modes are based on 300 by 300 dpi resolution, while Normal and Best modes are based on 600 by 600 dpi. As with other HP inkjets, you can force Best mode into 4,800 by 1,200-optimized dpi for high-resolution photo work, but that option claims a big performance penalty for results that don’t really outshine the company’s 600 by 600 PhotoREt color-layering technology.

Loaded with plain paper, the unit spit out our one-page business letter with spot-color company logo in 12 seconds in Draft mode and a nearly-as-quick 15 and 16 seconds in Fast Normal and Normal, respectively. The first was pale and shaky, but the second and third weren’t half bad, though to match a color laser we’d opt for Best mode (23 seconds). Repeating the test with inkjet paper (telling the driver it was “HP Bright White Paper”) yielded the same stopwatch times but, oddly enough, slightly darker and blotted text and a bit of banding in the logo, except for Best mode.

Twenty pages of Microsoft Word text (using the default last-page-first or Page-1-on-top output) took one minute and 54 seconds in Draft mode, but with a poor, quivery type quality. Fast Normal was fine for standard-sized fonts at three minutes and 14 seconds, with Normal sharp enough for five-point type at four minutes and 49 seconds. Using the auto duplexer to print the 20 Normal pages on 10 sheets lengthened the latter time to seven minutes and 17 seconds, but it worked without a hitch.

We were less impressed when printing PowerPoint slides and Adobe Acrobat documents: Both Draft and Fast Normal were disappointingly sketchy and even Normal (one minute and 35 seconds for six PDF pages) showed some banding in solid areas; Best mode yielded good results &#151 actually, a bit better or more forgiving on plain than inkjet paper &#151 but took three and a half minutes for the six-page Acrobat file. The 1200’s time of 15 minutes for a 55-page Acrobat document would have placed it firmly in the middle of the under-$1,000 color lasers we’ve tested, though a couple of minutes behind its Officejet 7410 stable mate.

While it offers neither memory-card slots nor six-color printing, the Business Inkjet did a good job with our digital photo images; Normal mode again showed some banding (45 seconds for an 8 by 10-inch print on inkjet paper), but Best mode gave us a nice 8 by 10 in 96 seconds on inkjet stock and a terrific one in a leisurely seven minutes and 45 seconds on glossy photo paper.

It’s not quite laser-quality &#151 nor whisper-quiet; the carriage makes a moderate amount of noise as it thunks back and forth firmly enough to vibrate a table or desk &#151 but the Business Inkjet 1200 deserves a look from office managers hesitating over even the relatively low cost of a modern color laser. You’ll just have to remind yourself of its bargain price while you wait for its best results.

Pros:
A high-volume office, not light-duty consumer, inkjet printer, with a highly cost-efficient design and low price even when loaded with options

If you want good quality, forget the fastest two of its four print modes; ink cartridges provided with printer are bait-and-switch starters