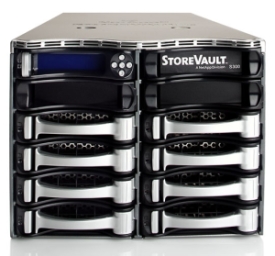 Maybe you started your business with a couple of desktops. When that quickly multiplied to a dozen, your staff wandered the corridors with floppies in order to swap data from one system to another. Then you added a server — and another server and yet another. But each time you add a server, it seems to fill up with data even faster than the last one.

If this scenario seems familiar, maybe it’s time to take a look at network-attached storage (NAS), which is by far the easiest type of storage networking to set up. “Simply put, NAS is storage that is connected directly to your network,” said Joe Trupiano, director of marketing at MicroNet.

The best way to think of NAS is as a very specialized kind of file server. If you have ever used a server as a repository for work files, then you should easily grasp the concept of NAS. Instead of saving a file to the C drive on your local desktop, you save it directly onto the file server or NAS box (represented as another lettered drive on your PC, such as N) that’s connected to your computer network.

While a file server has a limited supply of storage, NAS can provide terabytes (TB) of of instantly accessible space to anyone in the office over a standard Ethernet connection. And if you are able to hook up a server, installing NAS should present no problems – although some of the larger machines may require some outside help.

Much of this growth is being fueled by the small business sector. And the reason is understandable. IDC reports annual storage capacity growing in small businesses at a rate of 50 to 60 percent. That data has to be placed somewhere. And NAS is increasingly the answer.


Buy buyer beware. NAS now encompasses a wide range of offerings. These range from ultra cheap boxes with little sophistication to pricier models that may require trained help to install and configure. It’s a case of finding the right blend of price, performance and features.

“Key factors to consider when buying NAS include how well the system scales, how much the software costs as you grow and how easy it is to manage,” said Rob Commins, director of product marketing at Pillar Data Systems.

If your company has a handful of staff and just needs raw capacity, it is probably safe to install an inexpensive NAS box. It may not have the fastest performance but that won’t matter if only a couple of people access it at the same time. It’s when you have a lot of people accessing the NAS simultaneously that the performance limits of a low-end box start to show up. In that event, pay more attention to how well the more expensive NAS products may function when half the office jumps on it at the same time.

Another point to consider is scalability. If you start with something inexpensive and run out of room in six months, how easy or difficult will it be to hook a couple of them together – or else purchase a bigger model and transfer the data over.

Tip: Choose a vendor that offers several size and price points. Ask the sales rep what you’d have to do if you ran out of space and wanted to add a second box, or swap the old box for a larger one. If the answer is cloudy or complex, shop elsewhere.

Also, a particular NAS box might be easy to scale, but suddenly you find that software costs are spiraling out of control. Some vendors demand more licenses for every person that connects. Others require more feature rich management tools that sometimes come at a premium. Discover all the possible costs – including the hidden ones – ahead of time.

One final buying tip: pay plenty of attention to how easily the system is to manage.
Sales people can dazzle you with a wonderful spin about high availability, system resiliency and a host of other incomprehensible terms. If you have an IT guy, let him deal with all the techno-speak and get him to explain it to you in simple terms. If you don’t have anyone to babysit IT, then stick to the more basic gear.