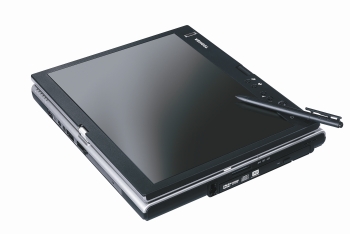 The Toshiba Portege M400 is the top-of-the-line convertible tablet PC from one of the world’s foremost laptop makers, so it’s little wonder that it satisfies on almost every level. It’s fast. It has a great — if necessarily small — screen. It’s solidly constructed. It includes extras such as fingerprint authentication and hard disk protection. And the Windows XP Tablet PC Edition operating system continues to impress. So what’s not to like about the M400?


Maybe it’s just us, but shouldn’t tablets be a lot lighter and more compact so that they’re actually useful in the applications for which they’re supposedly designed? Ideally, we’d like to hold a tablet in one hand and write, using the special pen, with the other. That’s not possible with this model — or probably any convertible tablet. Even holding it in the crook of your arm would be a strain for any length of time. The M400, which sports a 12.1-inch screen, measures roughly 11.5- x 9.75- x 1.5 inches and weighs five pounds with the optical drive. The non-tablet Portege R200 weighs considerably less — less than four pounds.


And another thing: when tablets first appeared, you paid a sizeable premium for them. The speculation then was that the price delta between tablets and regular notebooks would diminish. It has, but not by much. It wasn’t possible to do a comparison between the M400 and a similarly configured non-tablet Toshiba model, but we did compare an M400 available at the Toshiba Web site — although not the one we reviewed — to a similar Lenovo ThinkPad X60, an ultra-light with the same Intel Core 2 Duo processor, memory, screen size, hard drive and optical drive. The ThinkPad was almost $200 less — $1,604 versus $1,799. And it weighs a lot less than four pounds.


The Tablet Advantage
No doubt for some industries — in health care, for example, or for people doing survey work in the field, or maybe even for knowledge workers who want to be able to take notes in meetings on their PCs but be fully present and not hiding behind a screen — the tablet functions are well worth the extra money. In fact, the handwriting recognition built into Windows XP Tablet PC Edition may be worth the price of admission alone.


We’re always amazed by the recognition accuracy. This is not PDA-style handwriting recognition where you have to form letters one at a time using standardized gestures. You can write normally in cursive — and with the Microsoft digital ink technology, using the pen on a tablet screen feels very much like writing with a pen on paper. Even when writing at full tilt in interview mode — or meeting-minutes mode — conversion accuracy is good enough that we rarely, if ever, had trouble figuring out later what we wrote.


You can display a one-line handwriting panel on the screen when working in any application. The catch is, you have to keep tapping the Insert button after each line of input, which automatically converts the handwriting to text and inserts it into the application. If you use Windows Journal (included with the operating system) or Microsoft Office OneNote (not included with the M400), you can write on a continuously scrolling page and convert en masse later.


Solid Construction
Aside from the quibble about size and weight, the M400 is physically impressive. The crucial screen pivot that allows you to swivel the screen and fold it back over the keyboard to turn the unit into a tablet works smoothly and appears to be robust enough to last. Ditto for the ingenious convertible clasp that fastens the two sides together whether in tablet mode or closed up. In fact, the build quality is generally very good, as one might expect from Toshiba.

The screen — TFT Active Matrix, 16.7 million colors — is bright and crisp. We understand the appeal, but don’t feel the need for mammoth laptop screens. When you’re sitting as close as you usually are when using a notebook computer, 14 inches is fine.


Some may find the 12.1 inch screen on the M400 a tad small for volume text input or reading, but you can always use the zoom function in programs such as Word to increase font sizes, or increase font sizes everywhere using the Windows display properties settings.


The keyboard is very little if any smaller than the keyboards on bigger laptops — it measures about 10.8- x 4.4-inches. This is much smaller than a desktop keyboard, of course, but we had no trouble typing at or near our usual speed on the M400. We also like that the Home and End keys, which we use frequently, are a good size, unlike on a lot of laptop keyboards.


The M400 has a touchpad-type pointing device. We prefer the trackpoint type — the little nubbin that sits between the G and H keys on the keyboard — but most laptop makers have now standardized on the touchpad. ThinkPad appears to be the only brand that still offers the trackpoint. That said, we had none of the annoying problems we’ve had with other touchpads where the text entry point moves without warning in the midst of typing, apparently in response to the movement of our thumbs over the pad.


Lickety Split
Toshiba offers a variety of processor options for the M400. The unit we tested comes with a1.83GHz Intel Centrino Duo T2400 processor which is, as noted, slower than the newer 1.83GHz Intel Core 2 Duo with 2MB of cache and 667MHz FSB (Front Side Bus — the main pathway between processor and memory), which is available as one option on M400 models.


It’s possible that benchmark testing would reveal differences in performance between the fastest and the slowest that would be significant in some applications — crunching huge spreadsheets or video editing, for example. But for the applications most people will use on a tablet PC, even the slowest model should be plenty fast enough. Certainly in our real-world testing of the 1.83GHz Centrino Duo model, which included digital image editing, performance was generally excellent. We never felt the machine was underpowered.

If you’re in the market for a convertible tablet to use as your only PC and you do sometimes use compute-intensive applications, consider one of the faster models — keeping in mind the usual law of diminishing returns that applies in Intel processor pricing. (The difference in price between 2.16 and 2.33GHz models, for example, is a difficult-to-justify $280.) Otherwise, save your money.


Bump Protection
The hard disk protection feature, which locks the hard drive to prevent damage when the system senses movement that may indicate a dropped or mishandled machine, can be annoying if not reconfigured from the default settings. With the default settings the system generates error messages with even moderate movement. But the configuration can be adjusted, and this feature is definitely a good thing to have, especially if you plan to use the computer in the field.


The fingerprint reading technology is fairly standard. It saves you from having to input long passwords to log in to the computer to access your data. You have to enroll each person using the machine by swiping at least one finger several times over the reader — a half-inch-wide glass tube positioned at the top right of the screen when the unit is in tablet configuration. Fingerprint authentication takes only a few minutes to set up and worked fine in our limited testing.


Bottom Line
If you’re looking for a convertible tablet PC to use mainly for taking notes in meetings or for other applications in situations where you can place the unit on a table or other surface at least part of the time, the M400 will serve the purpose admirably. If you need a tablet to lug around for long periods, look elsewhere. This one is too heavy.


Based in London, Canada, Gerry Blackwell has been writing about information technology and telecommunications for a variety of print and online publications since the 1980s. Just for fun, he also authors features and columns on digital photography for Here’s How, a spiffy Canadian consumer technology magazine.