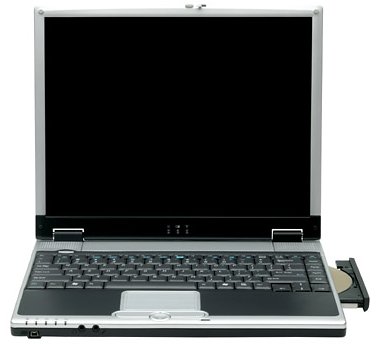 One of the golden rules, or at least golden oversimplifications, of portable PCs is that low-priced laptops are bulky and heavy, while slim and light notebooks are expensive and have small screens. WinBook has stepped up to prove that even with the recent release of faster, fancier processors, Intel’s original Centrino platform can still satisfy bargain-hunters

Built around Intel’s Pentium M 725 (1.6GHz) processor, the WinBook C240 relies on a 400MHz front-side bus and DDR memory instead of its new siblings’ faster 533MHz bus with DDR-2. But that doesn’t stop the notebook from showing perfectly capable application performance.

Our various benchmark tests place the C240 in the same league as last year’s Pentium 4/2.8 or Athlon XP 3000+ desktops. It’s not likely to set any speed records, but it certainly won’t keep you waiting for that spreadsheet or e-mail to load.

On the road, the 10.2 by 12.2 by 1.2-inch WinBook won’t weigh down your briefcase like a seven- or eight-pound laptop; its two-spindle design (with a combination 60GB hard disk and DVD-ROM/CD-RW drive) tips the scale at a fairly trim 5.6 pounds.

Sure, that’s a bit more baggage than a three- to four-pound sub-notebook, but such a system won’t give you the WinBook’s sunny 14.1-inch display. At least to our middle-aged eyes, the latter made good old XGA (1,024 by 768) Windows look positively billboard-like next to some of the downsized, high-resolution LCDs now on the market.

So the C240 is a happy balance of performance, weight and screen size. It’s also a pretty good deal: $1,199 (after what WinBook calls a $200 instant rebate). That lacks the impulse-buy magic of notebooks with a $999 sticker, but the system’s specifications won’t cause buyer’s remorse as a machine with only 256MB of RAM, a smaller hard disk, or lesser CPU might. It even comes with the office-network-friendly Windows XP Professional Service Pack 2 instead of Win XP Home Edition.

Memory Loss
One gripe about this WinBook is its limited memory capacity; since one of its two 256MB DDR modules is hardwired into the motherboard, the only upgrade potential is replacing the other 256MB with a 512MB SODIMM to boost the total to 768MB.

The Fujitsu 60MB hard disk is, as you could probably guess, a standard 4,200-rpm model with 2MB buffer rather than a faster or larger-cached speedster. We have no complaints with the Matsushita 8X DVD-ROM and 24/24/24X CD-RW combo drive, except that WinBook doesn’t bundle any CD burning software with the laptop &#151 just the WinDVD 4 player and the 90-day trial version of Norton AntiVirus 2005.

You will find microphone and headphone jacks (along with an IEEE 1394 port) along its front edge, with two USB 2.0 ports at the rear. Two more USB ports join the optical drive on the notebook’s right side; modem, Ethernet, and VGA ports plus one Type II PC Card slot are on the left. A cooling fan spins up when the WinBook’s working hard, but it’s not obnoxiously noisy.

An ample palm rest holds a smooth Synaptics touch pad with a scroll rocker between the mouse buttons. The keyboard has a comfortable typing feel and dedicated Home, End, PgUp, and PgDn keys stacked at its right edge, so you need only use the Fn or special shift key to toggle the 802.11g WiFi radio or adjust audio volume or screen brightness. Its only flaw, one shared with several laptops we’ve tested lately, is that that the Fn key is in the bottom left corner with the Ctrl key to the right of it, so savvy typists will wish it was the other way around (Ctrl in the corner or outboard location).

Our test unit’s 14.1-inch XGA display showed no bad pixels, and was bright enough for headache-free viewing even at its lower backlight settings instead of only the top one or two. Sound was predictably harsh and tinny for music playback, but OK for casual DVD viewing.

No Time To Play
While more-than-adequate everyday performance, we should point out that the C240’s Intel 855GM chipset lacks several features of the recently-announced 915GM. Laptop bargain hunters can live without DDR-2 memory or PCI Express graphics, but anyone hoping to edit home videos or play 3D games should note that the 855GM’s integrated graphics aren’t up to the task.

The system’s battery life was a bit better, if not sensational; our test unit averaged a respectable hour and 50 minutes of work and wireless Web-surfing before loud beeps from the low-power alarm. The AC adapter adds less than a pound to your attachi.

Incidentally, during notebook battery tests, we pass the time performing the vendor’s system-recovery or factory-disk-image restoration, as suggested after a catastrophic system crash or virus attack. While other WinBooks we’ve tested have the emergency-rebuild function in firmware (summoned by pressing F10 or some other key during bootup), the C240’s is a Windows utility, which obviously won’t help if the operating system is history. You’ll want to take advantage of the utility’s “create recovery CDs” option.

Status seekers will want to hold out for the better graphics and other enhancements of the new Centrino variants, but we give the C240 one thumb up for value at $1,199. If you’re seeking a not-too-heavy notebook mainly for word processing or similar low-octane chores, we’d add the second thumb up for WinBook’s model C220, which substitutes a Celeron M 330 (1.4GHz) processor, smaller 40GB hard disk, and Windows XP Home Edition, but keeps the desirable combo drive, 512MB of memory, and 802.11g wireless for a downright thrifty $799.

Settling for a 14.1- instead of 15-inch screen helps keep this midsize laptop under 6 pounds; settling for a 400MHz- instead of new 533MHz-bus Pentium M helps it afford 512MB of RAM and a DVD-ROM/CD-RW drive