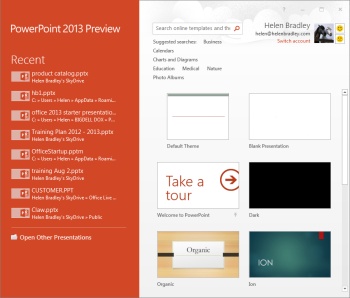 At first glance it may seem as if Office 2013 doesn’t offer much that’s new in this stalwart, small business software suite, but there are changes and most of them are good. These changes will make the Office applications easier to use for both beginner and experienced Office users alike.

In this article I’ll go over some of the new features and capabilities in Office 2013, which is due to be released officially in the first quarter of 2013.

With all the Office version numbers floating around, trying to keep it all sorted out can be a little confusing. Here’s a breakdown of the versions we’re talking about.

You must first sign in to a Microsoft account, and then download the installer application. If all goes well the Office applications install on your computer. On one test machine, I encountered installer difficulties that I subsequently overcame, but a quick search of the Web shows that a lot of people have encountered problems with the install process. Hopefully this will be sorted out in the final release.

There’s a lot to like about Microsoft Office 2013. The ribbon remains the key feature of all the applications, so the transition from Office 2007 or 2010 to 2013 will be fairly smooth. You’ll find additional tabs on the Ribbon, including the new Design tab, and the Developer tab is now enabled by default.

Figure 3: The new layout options for images in Word will make it easier to work with images.

All the applications in the suite have undergone a Metro-style makeover, which simplifies the screens are simpler with less dimension and shading in the screen surrounds. The change is designed to reduce interface distraction so you can concentrate on your work.

Office 2013 offers new file formats — Strict Open XML and Open Document Format (ODF) 1.2, but most people will opt to use those that are compatible with Office 2007/2010 to avoid major issues in exchanging documents with people who use those earlier versions.

In the major apps — Word, Excel, PowerPoint and Publisher — a new Start screen appears when you launch one of those programs. This screen displays a panel on the left with a list of recent documents and recent locations; any of which you can pin there permanently.

A search box for finding online templates lets you open a new blank document (the default option), or select one of the featured templates. If you want to open another file, select Open Other Documents to access files on your computer or those stored in a SkyDrive folder online. You can disable these start-up screens, but most people will probably opt to use them.