Yes, You Can Wear Duct Tape 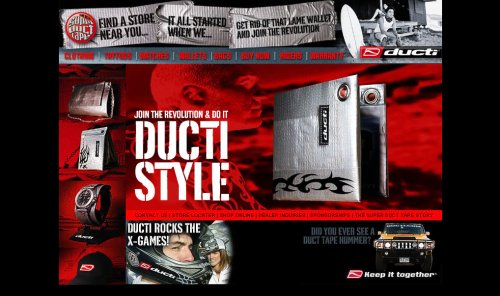 In the year 2000, Ducti was a product idea with a Web site, and not much else. The business’s first obstacle was introducing the public to its unorthodox inventory. Ducti sells wallets and other accessories made from Duct tape — an unusual fashion trend, to be sure, but one for which there is an audience. The problem was reaching that audience and making the sale.

One of the first things the site did — after setting up its shopping cart using Yahoo — was to create an online-offline price differential. A Duct tape wallet that sells for $21 on the Ducti site sells for $15 in a store. The site wanted to let retailers know that it would not undercut them. This set up step number two: a mass mailing of 65,000 postcards to small retailers across the country, from gift shops to novelty stores to clothing boutiques.

To tempt these mom and pop shops to carry a new (and strange) inventory item, Ducti offered a 90-day free return offer. About one percent of the 65,000 stores said yes, and suddenly the site had enlarged its market from one Web site to a network of stores. It became a new kind of business, a 21st century hybrid of online and brick and mortar, yet without actually owning any brick and mortar stores.

Since then, the site has expanded to offer its wallets in some 3,000 small retail outlets across the country, all the while selling through the site itself. Maintaining these myriad relationships is not easy. “It takes a lot of effort — I’ll tell you that,” says George Constas, Ducti’s national sales manager. But it works. Between selling through the site and through retail stores, Ducti has sold about 250,000 Duct tape wallets since 2001, Constas says.

A Sticky Relationship
The online aspect of Ducti’s strategy must be handled with care, Constas notes, because the site doesn’t want to hurt its relationships with retail stores. The duct tape accessories “are an impulse item,” he notes, which makes an in-store sale much easier to make, whereas online sales usually only result if a shopper “has seen it before and they know what they want.”

However, its site is a key part of Ducti’s strategy. “We try to encourage the people who have ordered online by giving them discounts every once in a while,”
Constas notes. For example, using all the e-mail addresses from its Yahoo store account, the site sent a mass e-mail offer for a holiday discount.

The site is a showcase of the company’s new products, a constantly updated catalog of its new Duct tape designs. “We see a lot of traffic on the site,” Constas says, and Ducti uses this to build all-important word of mouth for its unusual product.

The company also plans on using the site to showcase original Duct tape designs created by the customers. Constas envisions holding an online contest to see which customer develops the most interesting tape-based wallet, at which point the site would manufacture it and perhaps name it after its creator. The site is all about “an interaction between the end user and us,” he says.