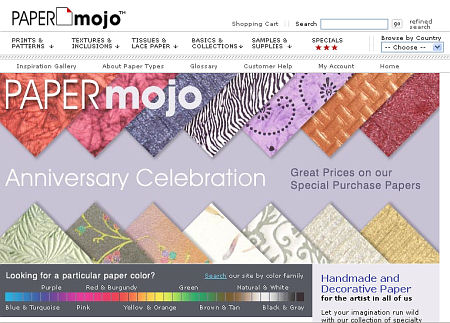 Shelly Gardner-Alley felt a certain frustration in her first experience with e-commerce. As a Web designer who built e-commerce sites, specializing in
Kurant’s StoreSense software, she worked with many brand new e-commerce operators. These inexperienced owners needed extensive handholding.

“They used to come to us for everything, no matter if it related to what we were doing for them or not,” she recalls. The extra hours she spent kept her Web design business, Chimera Studio, from being highly profitable.

So in 2002 she and her husband decided to launch their own e-commerce business. They did a lot of research &#151 “We were avid readers of the Internet.com site and all the newsletters,” she says. But what was the best item to sell?

After examining the market, they launched Paper Mojo in early 2004. The site sells high-end decorative paper, like silk paper from Japan, or translucent vellum from France, ranging from $2 to $16 per sheet. The paper is good for invitations, and the site is popular among wedding planners.

Before starting Paper Mojo, “I didn’t know anything about decorative paper,”
Gardner-Alley admits, “but I learned.”

The couple’s decision was a pragmatic one, based on what sells on the
Internet. She picked decorative paper because it’s “extremely niche, lightweight to ship, and there’s not a high incident of fraud,” among buyers. Also, the cost of storage is low and paper doesn’t go out of style.

As a veteran Web designer, Gardner-Alley surveyed the competition’s sites and found the weaknesses. A few sites were well designed but had a shallow product offering. One site had a rich offering but terrible navigation.

Knowing her competition, she built her new site to top them, using the Kurant
StoreSense software &#151 she still likes the application, however uphill her career as a Web designer was.

“We got a thousand visitors the second day, that we were totally unprepared for,” she recalls. The fact that Paper Mojo is such a niche site allowed it to catch Yahoo’s eye, she believes.

After that, she started investing in pay-per-click advertising. After getting her first order in May 2004, she now spends $300-500 per month on Google keywords, and about $50-100 on Overture keywords.

“We started off bidding high and then reduced it, after learning how to target the keywords,” she says.

After construction, step one was getting noticed. She submitted the site to
Yahoo and &#151 in a stroke of luck &#151 the search engine featured PaperMojo in a newsletter.

Business Growing Tools
As she continues building her site she relies on tools and resources she has found during her years as an e-commerce entrepreneur.

In particular, she speaks highly of a search engine optimization expert she works with, Jesse
Gersenson
.

“We did a major optimization on the site in January, so our organic search engine ranking is improving quite rapidly,” she says.

She spends money on a marketer who distributes Paper Mojo press releases on
PRWeb. For her e-mail campaigns she uses Campaigner, made by Got Corporation. “It has wonderful tracking and a very nice interface,” she says.

Her Web analytics tool is IndexTools, though she says the service has become expensive as her traffic as grown.

At this point she fills about 10-20 orders a day &#151 she’s not making a fortune, but the business is up and running. She likes the creative control she gets from operating her own e-commerce site, as opposed to building sites for others. “It’s been exciting,” she says.

How TikTok is Helping Small Businesses