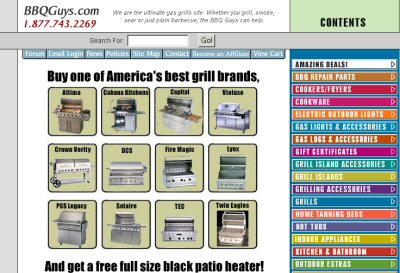 Not content with its current success, BBQGuys plans to launch an e-commerce superstore “If everything stays on schedule, we’re launching a new site in May with about two million products,” says BBQGuys president, Mike Hackley. The new mega-site will be called ShoppersChoice.

As ambitious as that may seem, as far as Hackley’s concerned, it’s essentially a continuation of his current growth pattern.

“Every year we’ve grown in triple digits, and we’re going to take the technology we used to do that to turn ShoppersChoice into a major shopping portal,” he says.

By Hackley’s account, the revenue from BBQGuys (and the 70 other grill-related sites the company owns) has indeed grown like wild fire. Having opened its first store in 1998, the company launched its site in 2001 and saw $800,000 in revenue. By 2004, its annual revenue grew to $5.4 million.

Partnerships and Visibility
The business partnerships that Baton Rouge-based BBQGuys developed have given the site high visibility. The site’s inventory is fed into Amazon and Shop.com and other well-trafficked sites, helping to generate many orders. These large sites take a healthy commission, but being present on them “creates awareness of you, and as a result you get picked up in all kinds of publications,” Hackley says.

BBQGuys’ affiliate program, with technology provided by Commission Junction, is such an effective sales tool that the site will greatly expand it when it launches
ShoppersChoice.

“We’re looking at offering eight-to-10 percent commissions for the affiliates,”
Hackley says, noting that this is above the industry average.

A huge traffic driver for the site is its search engine strategy. At the bottom of BBQGuys’ homepage you’ll find a list of links to the “BBQ Ring,” a large collection of sites that BBQGuys owns, all of which link to each other. This extensive interlinking helps increase BBQGuys’ search engine profile.

Additionally, “We do great search engine optimization,” Hackley says. “On
Google and MSN, anytime you search for DCS gas grills or PGS gas grills, we’re normally number one and two. The site does individual keyword optimizations for each product &#151 when you’ve got a couple thousand products, most companies don’t do the optimization they need to do.” But he makes a point of doing so.

Launching a Mega-Store
Hackley is bulking up his business to handle the upcoming launch of
ShoppersChoice. The site is hiring about 15 experts, one for each of the new retail categories it will soon offer.

In time, he expects to offer live chat staffed by experts in each channel, to answer any shopper query.

The site will sell some of its products through drop-shipping &#151 meaning it won’t need to hold them in inventory &#151 but Hackley says many of the most popular items will reside in his warehouse. Product is arriving daily, he says.

He is, of course, aware that there’s risk involved in the massive new undertaking, and to make it work he plans to expand his partnerships.

“The more places you’re in, the more people hear about you, the greater the chances you’ll quadruple pretty fast,” says Hackley.