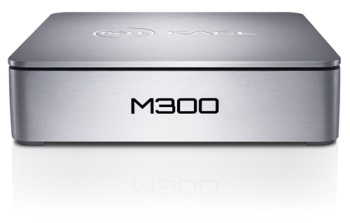 Do you know how many PCs are sitting on your small business network, what hardware is under the hood, which operating system and applications they’re running, and perhaps most importantly, whether that software is properly licensed?

The answer is probably no, considering that compiling and maintaining such information typically requires a degree of time and effort that most small businesses can’t afford to devote to the task.

Dell’s new KACE M300 Asset Management Appliance, which is an an SMB-focused sibling of the company’s KACE K1000/K2000 appliances targeted at large enterprises, aims to make PC and software inventory practical for small businesses by eliminating much of the grunt work involved.

Given its aluminum housing and petite square dimensions, you could easily mistake the $2,498 M300 for a Mac Mini at first blush. (At 1.5- x 5.8- x 5.8-inches, the M300 is actually slightly smaller than the Mini.) Dell says the M300 is designed for small business networks with up to 200 computers, and it’s worth noting that the M300 only inventories computers — not other network devices such as printers, switches, IP phones and the like.

The M300 also only works with Windows systems — it supports desktop and server versions from Windows XP up through Windows Server 2008 R2, but any Mac or Linux systems on your network aren’t invited to the party.

Getting the M300 up and running on the network is a straightforward affair. After plugging in to power and Ethernet, we used a laptop to perform the device’s initial configuration, creating an administrative account, specifying network settings, etc., which took only a few minutes.

The next order of business was to use the M300’s administrative control panel to install the software agent on the first PC. The agent collects and reports data to the M300, and it must ultimately be installed on every computer on the network.

The first computer that gets the agent becomes the M300’s deployment server, which acts as the unit’s eyes and ears by discovering additional computers on the network and delivering their info to the agent. The deployment server needn’t be a dedicated system or even a particularly powerful computer, but it does need to remain constantly on and connected to the network to do its job.  (It’s easy to change the deployment server later if you want, as any system with the agent installed can serve in the role.)

Viewing Information on the M300

Within about 15 minutes of us installing the first agent, the M300 reported 26 computers on the network — a mix of Windows XP/7 clients as well as Windows 2003 and 2008 servers — though it knew nothing other than the computer name of about 25 of them (surprisingly, not even the IP address). Once they’d been identified, we were able to remotely send the agent to each of the newly- discovered PCs; you can also use Group Policy or a third-party software deployment tool to deploy the agent to a group of systems en masse.

Once the agent’s done its digging on a system, the M300 can give you a lot more information, ranging from the hardware specs such as model, manufacturer (or virtual machine platform, as the case may be) CPU type, RAM and storage capacity (including free space), OS version and updates present, as well as a comprehensive list of every piece of software installed on the system — including the stuff that runs on startup.

If the system happens to be a Dell, the M300 will even use the Service Tag to pull up the warranty information (for non-Dell systems you can enter the info manually).

The M300 makes it easy to drill down through this plethora of information with three levels — the basics, more detail and, finally, all the data that’s been collected. You can also view a chronological history of a system’s recent events, as well as low, medium and high-priority notices of events that might require your attention. For easy access, notices from all systems are always displayed on the M300’s initial login screen, a.k.a. the Dashboard.

To easily find a particular system or group of systems in the M300’s inventory, you can define custom color-coded labels, apply pre-defined filters, or use the M300’s search feature to find computers using IP or MAC address, computer or user name, or other parameters.

We particularly like the fact that clicking on the name of a patch or application for a particular computer calls up a list of all the computers where the item is present.  You can receive notices without having to log into the unit by subscribing to the M300’s RSS feed. On the other hand, the only feed link offered is for all notices — not just high-priority ones — which may result in a bit of information overload.