The PDA That Never Forgets 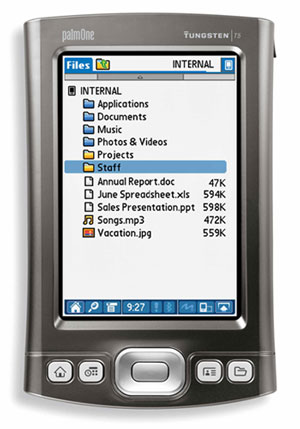 One of the main problems with using a PDA is off-loading the data before your battery runs out. Does this sound familiar? You’re out making client calls and your PDA battery’s running low. You can’t get back to the cradle in time to charge your handheld, and you don’t have a spare battery. Without a recharge, you might as well kiss your precious data goodbye.

Forget the operating system and CPU; the heart of a PDA lies in its memory. Yet business people who rely on mobile computing have always been vulnerable to the dreaded power drain.

palmOne addresses the memory stability issue with its Tungsten T5 in a way that sets the new handheld apart from all the PDA competition. (The company skipped the designation T4 because four is an unlucky number in some Asian cultures.) It’s not only a breakthrough product for palmOne, but for the entire PDA industry.

Thanks for the Memory
The Tungston T5 doubles the amount of memory from the previous generation Tungsten T3 to a whopping 256 megabytes &#151 the most available in any handheld.

palmOne portions out the memory this way: 55MB of the RAM works just like traditional Palm internal RAM, while 41MB of ROM is reserved for the operating system and bundled applications. What sets the T5 apart is an additional 160MB of Flash memory that works just like a Secure Digital (SD) card, except the “card” is inside the PDA.

Since the 160MB is non-volatile, its contents will survive an accidental power drain. Should your T5 run out of juice, simply charge the PDA when you can, and you’re back in business. Of course, you store (but don’t run) files and applications in this Flash memory, so “storage” is probably more accurate than “memory.” As with software from an external memory card, applications from the 160MB get launched into RAM to do their business.

The T5’s 160MB Flash memory offers another cool feature &#151 Drive Mode. In this mode, you can use the T5 like a USB Flash drive. Just plug the T5 into the USB port of a PC, and the 160MB shows up as an external drive &#151 you can then drag and drop files between the handheld and the computer. With the T5, you can store any type of file or application, even those that aren’t compatible with the Palm OS.

OS/Software
Speaking of the Palm OS, the Tungsten T5 runs Palm OS 5.4, also known as Garnet, and not the newer Cobalt. Despite PalmSource delivering Cobalt to licensees over ten months ago, not one handheld or smartphone built on the platform has yet appeared. PalmSource even reintroduced Cobalt &#151 with an even greater emphasis on smartphone &#151 last week at its European Developer Conference.

When we asked a palmOne representative about Cobalt, he said the company has been able to port many of the features of the next-generation platform to Palm OS 5 for its latest devices with proprietary software (e.g. Support for landscape viewing and 256MB of RAM). This gives palmOne users a shot at experiencing some of the advantages of the new OS without having to wait for Cobalt smartphones and PDAs to ship &#151 whenever that might turn out to be.

To help T5 users better manage their files, palmOne bundles a new Explorer-like file manager. With it, you can launch applications by selecting an associated file. You also get DataViz Documents To Go for Microsoft Office (Word, Excel and PowerPoint) compatibility, palmOne’s own VersaMail e-mail application and a Web browser.

palmOne’s New Win Explorer-Like File Manager
The company also added a new “favorites view” to the traditional Palm OS launcher and the handheld integrates the same multimedia suite available with the Zire 72 for audio and visual (still and video) playback. It also delivers a mobile version of RealPlayer.

Specifications
Although a part of the Tungsten T series, the T5 uses a design similar to the popular Tungsten E, a mid-level PDA that accounts for over 20 percent of palmOne sales. That would explain why the T5 nixes the slider found in previous Tungsten T handhelds. It does feature the same high-resolution 320×480 pixel and 65,536 color screen and virtual graffiti area found in those devices, however.

You can use this slot for palmOne’s new Wi-Fi SD card, as the T5 doesn’t integrate that wireless technology. As with previous Tungsten T PDAs, the T5 implements Bluetooth as standard.

While the T5 uses the newer Intel XScale Bulverde CPU, at 416 MHz it is not the fastest processor available. It has a 3.5 mm headphone jack, but no voice recorder button as with other Tungsten T PDAs. Excluding the voice recorder seems an odd decision for a handheld aimed at business people.

palmOne has replaced its Universal Connector and instead features what it calls a Multi-Connector, which uses two ports, one for power and the other for data. That way, if you’re traveling on business for example, all you need to take along is a USB sync cable. The T5’s powerful 1100 mAh battery trickle charges through the cable. Multi-Connector also supports audio output for a future palmOne cradle that will be able to link to speakers.