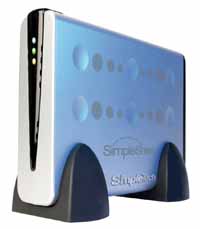 Storage — it’s something every business needs plenty of and, fortunately, prices have fallen to the point where it’s not unreasonable for small companies to have a network attached storage (NAS) box — with hundreds of gigabytes — plugged into a computer network. It’s great to have the comfort of, and access to, all that data storage at the office, but when you hit the road, you can’t take it with you. Right?


Not according to SimpleTech, , a Santa Ana, Calif.-based maker of network attached storage known as the SimpleShareNAS. Starting in March, the company’s newest version of its 500GB NAS box offers an added twist — remote access via any Web browser.

The company calls the product SimpleShareNAS with iShare Remote Access, and it says that the remote access feature came about as the result of popular demand. “Our customers consistently requested remote access capability,” says Charles Hayes, SimpleTech’s product marketing manager.


“The iShare lets you access the networked drive from any browser so that you can upload or download files no matter where you are,” says Hayes. He also notes that iShare lets you encrypt data on the drive to prevent hackers from gaining access.


A remote-access drive could make a lot of sense for anyone who tends to forget files back at the office or who doesn’t want to risk losing sensitive data if their notebook is stolen.


IShare also includes the iShareGallery, a feature designed to let you create personal Web pages. Hayes says the gallery lets you upload images from your digital camera to your site and invite other people to view them. “A great business example would be realtors who want to post photos of the homes they’re showing,” he said.


The company aims to make setup easy, and Hayes notes that drive technology features such as AutoDiscovery and NASFinder mean that you don’t need networking experience to set up the drive. “You don’t have to map the drive to the network, that’s all handled automatically,” he said. “When you plug the SimpleShareNAS into a network router, it appears as a shared, lettered drive on the network.”


If 500GB of storage space isn’t enough, or you want room to grow, Hayes says you can add two more drives by connecting them to the two USB ports on the back of the SimpleShare NAS for up to 1.5 terabytes of space. Another option: plug in a USB printer so that everyone on your office network can use it.


SimpleTech says that the 500GB version SimpleShareNAS will have the iShare capability starting this month, and it will sell for $549. The company also plans to include iShare on the rest of its NAS boxes starting in April.

Lauren Simonds
Previous articleNEC Announces the IPK II for SMBs
Next articleLooking for a PC? Have You Met Lenovo?