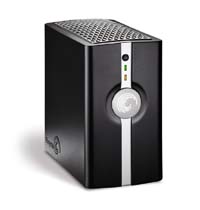 Is your business facing a growing mountain of digital data that’s stretching your storage capacities to the limit? You’re not alone. With the proliferation of e-mail, graphics files, digital video and audio files, super-sized applications — not to mention industry- and Federal-compliance regulations — small businesses everywhere face the same daunting challenge.


Seagate thinks it can lend a hand. The company today announced new storage products that it says can help small businesses manage and protect digital content whether it’s on the network, on the desktop or on the go.


Seagate Mirra Sync and Share Personal Server
This network storage appliance is the next generation of the Mirra Personal Server 2.0, and it’s the first product to be released since Seagate bought Mirra in September 2005.

The appliance is designed to plug into a network and, according to Seagate, it’s the first appliance that let’s you protect and share data on both Macs and PCs.


As explained by Joani Clark, a Seagate product-marketing manager, the device plugs into a router, either wired or wireless. You then install software on all the PCs and/or Macs on your network using a software installation wizard.


According to Peter Radsliff, Seagate’s executive director, the company designed the appliance to be simple enough for anyone. “This is content management that even your mother could use,” he said. “There’s absolutely no knowledge of networking required. This is a no-tech small business server.”


Offered in both 320GB and 500GB capacities, the Mirra Sync and Share Personal Servers will sell for $499 and $599, respectively, and are scheduled to be available by the end of the month.


Seagate 750GB Pushbutton Backup External Hard Drive
Seagate calls this updated, 750GB version of its 500GB sibling “the world’s first ¾ Terabyte external hard drive.” Designed to plug into the USB 2.0 or Firewire port of a desktop (Mac or PC), this high-capacity drive was made to fit into the same amount of space as an office stapler or tape dispenser.

The drive uses Seagate’s perpendicular recording technology, which, according to the company, allows for massive capacity in a comparatively small form factor. “This is the first time you have room for all of your personal and work files — plus back ups of your PC and your laptop — in one small box,” said Radsliff.


Seagate says the drive can hold all of the following data and still have 300GB of space left for data backup.

The device features a 7,200 rpm SATA drive, BounceBack Express software for data backup, it’s on retail shelves now, and it sells for $559.

The drive also features a USB 2.0 interface and security measures, says Radsliff, including password protection for files and 128-bit encryption. Seagate plans to start shipping the pocket drive in Jul, and it will sell for $149.95.