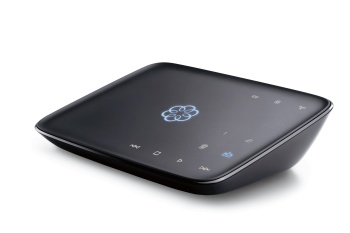 The venerable landline home office phone is quickly becoming an endangered species as more and more people abandon it for the added features and lower costs of VoIP-based phone services that use your broadband Internet connection to place and receive calls. If you want to cut the cord and embrace VoIP, you have plenty of choices these days, including offerings from Skype, Google Voice, Vonage, and digital phone service provided by one’s ISP.

Then there’s Ooma, a landline home phone replacement that takes a different approach from that of most VoIP service providers. VoIP services typically impose minimal, if any, up-front costs in favor of a (sometimes sizable) monthly fee based on usage and/or the level of features provided.

By contrast, Ooma hangs a relatively hefty $200 price tag on its Telo VoIP hardware, but buy one and you get digital home phone service with unlimited (OK, not exactly — see the caveat later in this article) domestic calling for no monthly charge aside from obligatory taxes and regulatory fees. These taxes/fees vary by municipality and generally amount to $4 or less per month — enter your ZIP code at Ooma’s Tax Calculator to see the exact charges for your area.

The foundation of Ooma service is the aforementioned Telo, a sleek black box about the size of the charging/answering machine base of a typical cordless phone. You start by connecting the device (which sports a set of illuminated and flush-mounted answering machine buttons, among other controls) to an Ethernet port on your broadband router. You then activate the device at Ooma’s Web site by entering a unique 7-character code from the bottom of the unit

An alternate configuration (and Ooma’s recommended one) is to connect the Telo directly to your cable/DSL router and then connect your broadband router in behind the Telo, as this gives the Telo first dibs to prioritize voice traffic over your Internet connection for optimal call quality. We opted not to use this configuration because it results in a Double NAT scenario that makes network port forwarding for things like gaming and remote access problematic.

This didn’t result in any apparent ill effects, either in ease of setup or in the quality of voice calls. (Either way, a well-illustrated Quick Start guide should make the physical Ooma set up relatively easy for all but the most technophobic.)

Within a minute or two of powering up the Telo and making the necessary connections — including plugging a conventional corded or cordless phone to its phone jack — its large Ooma logo illuminates blue to indicate the device is online and operational. A helpful touch: the logo glows red when this isn’t the case.

During the Ooma activation process, you can choose a new phone number from an area code in one of the contiguous 48 states, or exercise the option to port an existing phone number to the Ooma service, a process that can take up to 3-4 weeks and costs $40. In addition, you must provide detailed address information for the E911 database, as well as your credit card info for the monthly taxes/fees.

How to Use Ooma

Once the Telo is up and running, you use your phone pretty much as you did when it was plugged into the phone jack on the wall. We placed and received numerous calls and found the audio quality to be quite good — there were occasionally muffled or garbled patches (such is the nature of VoIP), but the vast majority of the time Ooma’s calls sounded at least as good as, or better than, a landline or other VoIP services we’ve used.

As mentioned earlier, Ooma’s standard calling plan nominally includes unlimited calls within the United States, but making international calls (including to Canada) does cost extra. You can pay for such calls by setting up a pre-paid account to cover the per-minute charges, or you can ante up an extra $10 per month for 1,000 international minutes.

The international minutes purchased by the latter option aren’t universal, however. You can use them to call landlines in about 60 countries, but usually not mobile phones. If you want to make 411 Directory Assistance calls (does anyone do that anymore?), they cost 99 cents each and are deducted from your pre-paid account.

Ooma’s default calling features include Caller ID, Call Waiting and voicemail, which you can check from the Telo unit, from any phone by calling your own number, or at Ooma’s website (you can also view a detailed log of all your calls from the site).

Ooma also offers an upgraded Premier service level for $9.99 a month or $120 billed annually, which includes quite a few additional or enhanced features including call screening, voicemail to email forwarding, free calling to most of Canada, and the capability to block anonymous or unwanted calls. Signing up for Premier also waives the $40 charge for number porting.

It’s worth noting that new Ooma customers automatically get Premier for a 60-day trial period. That’s great, but the wizard that takes you through setting up the features when you sign up for an account doesn’t distinguish between which ones are standard and which are part of Premier, so it’s easy to set up features without realizing that they’ll cost you extra after a couple of months if you want to keep them.