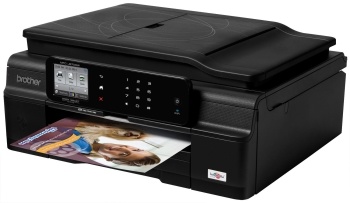 There’s been a lot of technological innovation in printers over the last few years. Not so much in the realm of getting ink onto paper, but rather in connectivity—getting documents and photos into and out of the printer without need of a computer.

Brother’s MFC-J870DW breaks new ground in this area as the first printer to include built-in Near Field Communication, or NFC, technology. (Samsung subsequently launched  a pair of NFC-equipped lasers, but as of this writing Brother makes the only inkjet sporting NFC.)

A bit of background—NFC lets two devices that are touching or in very close proximity (no more than one or two inches apart) communicate and exchange data without the cumbersome setup processes imposed by Bluetooth or Wi-Fi. NFC is most commonly used for file transfer between devices, and to a lesser extent, mobile payments, but it’s easy to see how the technology offers a convenient way to get a document or photo to a printer from a smartphone or tablet.

The MFC-J870DW is a small office color inkjet that can print, copy, scan and fax. It connects to a network via either 10/100 Ethernet or 802.11 b/g/n Wi-Fi. It uses a four-cartridge ink system (CYMK), carries a print rating of 12 pages-per-minute (PPM) for black and 10 PPM for color (ISO standard), and it prints duplex without a bulky paper-handling module hanging off the back.

Figure 1: Brother packs a lot of ways to connect into the MFC-J870DW, a compact and inexpensive multifunction printer.

The large adjustable panel on the front of the all-in-one printer features a bright, sharp 2.7-inch touch screen. That’s small given the panel’s overall large size, but what looks like an adjacent empty expanse of glossy black plastic is actually an array of touch-sensitive controls that selectively illuminate based on the feature currently in use. The screen and other touch controls are very responsive and don’t require excessive pressure to activate.

Whereas most printers conveniently locate their various ports on the back of the unit, the MFC-J870DW places its USB, Ethernet, phone, and fax jacks underneath the scanning surface and toward the front of the unit so you have to “pop the hood” to get at them. Other Brother printers do the same thing, and it makes using wired connections needlessly complicated since you’re forced to snake cables through the interior of the device. Moreover, the extra six inches or so that the cable needs to travel through the innards of the system can be the difference between a cable that’s just long enough and one that doesn’t quite make it.

On the other hand, getting the MFC-J870DW connected to Wi-Fi is quite easy. We did it directly from the printer via a built-in setup wizard. After scanning for networks and entering the WPA2 password (from a full virtual keyboard so there was no cumbersome character scrolling needed), the unit was online.

These days, there’s a better-than-even chance that a document or photo you want to print isn’t sitting on a PC’s hard drive but rather on a smartphone, tablet, or perhaps some form of cloud storage. Don’t worry though, the MFC-J870DW covers virtually all of these bases. For starters, it includes support for Apple’s AirPrint, Google Cloud Print, and Wi-Fi Direct printing (the last of which allows mobile devices to link to the printer without an already established Wi-Fi network acting as the conduit).

These features are fairly common in today’s maintstream printer, but what really sets the MFC-J870DW apart is NFC. Using it requires an Android device as well as Brother’s iPrint&Scan app. Be sure to check Brother’s list of officially supported devices. Note that NFC isn’t supported on iOS devices (current models lack NFC capabilities) or on Windows Phone 8 devices—this is in spite of the fact that the iPrint&Scan app is available for Windows Phone 8 devices, many of which also include NFC. 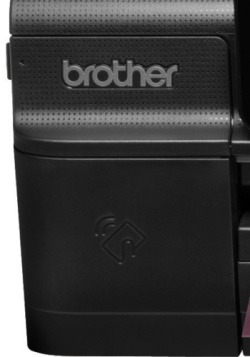 In any event, we tested NFC with a Samsung Galaxy S3 and S4 and, for the most part, it made printing brain-dead simple. After opening a document or photo in the app, we placed the phone next to the NFC symbol on the left front of the MFC-J870DW. Instantly we heard a beep, and a “Touch to Beam” message appeared on the phone’s display.

Upon tapping the screen, the file transfer started and printing began within a few seconds. Notably, you don’t need to hold the phone next to printer during the entire process; the fact that you can remove it after a few seconds suggests that NFC is actually being used to set up a Wi-Fi Direct connection, which in turn transfers the file. (Recall that NFC won’t work beyond a few inches distance.)

Brother’s iPrint&Scan app isn’t just for NFC printing; it can also connect to a printer via Bluetooth or Wi-Fi. Regardless of the connection method, one caveat worth mentioning is that printing certain things can be limited by the capabilities of the app. For example, you can print emails via the app, but only from a Gmail account—you’re out of luck if you use any other provider.

How to Find the Right Restaurant Food Suppliers