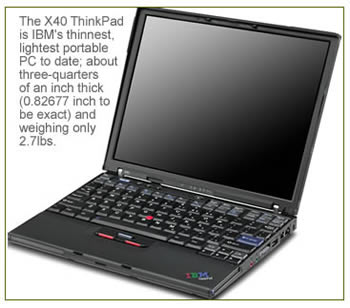 When IBM first released the X31 ThinkPad in March 2003 it was heralded as the undisputable, ultra-portable, heavyweight champion of the lightweight notebook computer world. Weighing in at just 3.6 pounds and packing a powerful processing punch, product reviewers proclaimed that mobile computing doesn’t get much better than this.

That is, of course, until today.

IBM engineers went back to the weight room and knocked another pound-or-so off the popular portable PC. Weighing in at just 2.7 pounds, IBM’s new X40 ThinkPad is the lightest and thinnest ThinkPad ever.

Jeff Samitt, worldwide ThinkPad X-Series segment manager for IBM’s personal computing division, said the company went back to the drawing board and spent a lot of time reengineering the X40 ThinkPad.

“The X31 is very important to our core market, so it’s worth mentioning that the X31 is not going away. We’re refreshing it with the X40, and it is a hard act to follow,” Samitt said. “This market segment — demanding mobile computer users — will be happy to see we now have a ThinkPad that is 25 percent lighter and 20 percent smaller, in terms of metric volume, than the X31. So it’s not just our lightest ThinkPad ever, it’s also our smallest footprint ever offered.”

Typically, a smaller footprint in a portable PC means the keyboard has been squashed down to the size something requiring a magnifying glass to see and the dexterity of a neurosurgeon to use. Samitt says not so for the X40 ThinkPad.

“The X40 ThinkPad offers the same size keyboard as the X31,” Samitt said. “We shaved a little off the sides and back. The result is a portable PC that allows for more room to compute in tight spaces — like an airplane. The ThinkPad X40 did not have to sacrifice its full-size isometric keyboard to come in almost a full pound lighter than its predecessor.”

Also unchanged is the ThinkPad’s 12-inch screen. Samitt said users did not want to see the screen size shrink at all. While the X40 ThinkPad is truly ultra-portable, IBM did not forego its form factor for durability in order to lighten the load. This notebook knows how to take a punch.

“We still have a rigid plate beneath the keyboard for extra durability. You won’t find that in a lot of ultra-portable offerings — most competitors compromise rigidity for weight,” Samitt said. “We still use a magnesium alloy on the top and bottom covers. The material is lightweight, but rigid enough to protect the chassis and the LCD panel. Thick metal hinges connect the core of the base to the top cover and we wrap a thicker pedestal around the top. This might add weight, but it keeps the X40 ThinkPad durable.”

All this is good, but most people don’t pummel their portable PCs — they drop them, which is why IBM introduced its active protection system (APS) last year. APS acts like an airbag for portable PCs. The technology is all about sensing when a notebook loses its equilibrium, that’s when the protection system kicks into high gear. Samitt explains.

“APS consists of a chip that is mounted on the motherboard. It senses when it’s being dropped from nearly any height.” Samitt said. “When the chips senses a fall, it stops the hard drive from spinning. By stopping the head of the hard drive, we provide damage resistance that is up to four times better than the average notebook. This is important in ultra-portable space because the propensity for dropping a ThinkPad is high.”

Think IBM is getting a little over protective? There’s more — the X40 ThinkPad also comes equipped with IBM’s newest ThinkVantage Technology — IBM Rescue and Recovery with Rapid Restore. Samitt said this is the first notebook that IBM has built with two operating systems — the main Windows operating system and a second, emergency embedded operating system containing the recovery tools.

“Rapid Restore can provide online and offline backup and recovery rescues in case of a Windows crash or even a virus,” Samitt said. “It kicks in during the pre-boot and post boot.”

At the pre-boot, before Windows opens, users can hit a button for access to a graphical interface that has a bunch of tools available for recovering lost data. You can do it yourself or have IBM technical support help you out. One program can also take care of completing scheduled backups of operating systems, applications and even data on a daily, weekly, or monthly basis. IBM Rescue and Recovery with Rapid Restore is available to X40 ThinkPad users through the duration of the warranty — either the standard one-year term or an extended three-year warranty.

IBM has also retooled its docking solution — a key point for small businesses that need the mobility of a notebook and the flexibility of a desktop for general purpose computing. IBM’s new X4 UltraBase Dock is a lot smaller and lighter than its predecessor. The X40 ThinkPad plus X4 UltraBase Dock with a DVD drive will still weigh less than four pounds — the price of such a system starts at about $1,699. If you skip the docking station pricing starts at $1,499.

Samitt said that a small businesses looking for a good deal should consider bundling a ThinkPad with a docking station. “The two-spindle bundles provide a very good value for SMBs,” he said. “IBM’s X-Series is the ultra-portable line of ThinkPads used by road warriors, business travelers, and small business owners who are frequently away from the office and need all-day computing.”

IBM offers a variety of wireless technology options via Intel 802.11b, IBM 802.11b/g, and IBM 802.11a/b/g Wi-Fi systems. The ThinkPad X40 also includes innovative new features such as a powered USB 2.0 port, which supports external optical drives without a separate AC adapter, and a new Secure Digital port. Would-be buyers have a choice of 1.0GHz or 1.2 GHz Intel Pentium M processors. Standard memory is 512MB and 40GB of storage comes standard on the hard drive.

In a nutshell, IBM unveiled a completely redesigned ultra-portable notebook computer. Just like its predecessor, the X40 ThinkPad is setting new standards for portability, battery life, and wireless connectivity in mobile computer systems. If you’re setting news standards of sales and services at your small business this year, it’s worth taking a look at the X40 ThinkPad.